From December 20, 2019 to January 6, 2020, the public is invited to go to Fort Fleur d’Épée in Le Gosier to see the exhibition titled “Connivence 2” organized by Lucien and Olivier Léogane. 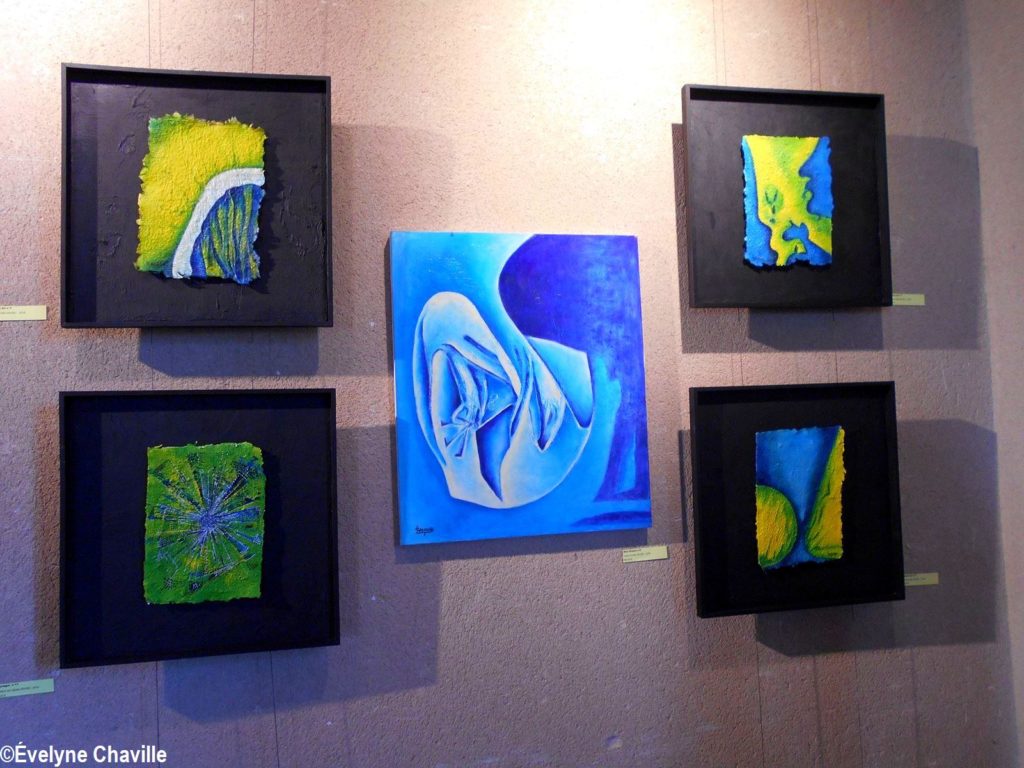 Since the opening of the “Connivence 2” exhibition, many tourists and locals went to this old fort. It would seem that everyone wants to see how the two visual artists translated this word with their brushes. Some buy the works.

“The term “connivance” is stronger than “complicity”, we had found it more appropriate. Ten years ago, when we presented the “Connivence 1″ exhibition at the Centre Culturel Rémi Nainsouta, everyone had brought their production. In 2019, we had a discussion, a starting point”, explained Lucien Léogane.

This exchange between father and son first was about the theme to be treated, that is to say the four elements: air, fire, water and earth. Then the two visual artists discussed the use of the famous paper invented and made, twenty years ago, by Lucien Léogane and another Guadeloupean visual artist Klodi Cancelier with the assistance of a Korean lady. “We decided that this paper, which is a local production, would serve as a support for our works, so a friend who went to Canada brought it to Olivier so that he could work”, said the visual artist who discovered painting at age of 17. This paper became for Lucien “Papyrus” and for Olivier, “Papyragaï”, in comparison with his art “Horagaï”. 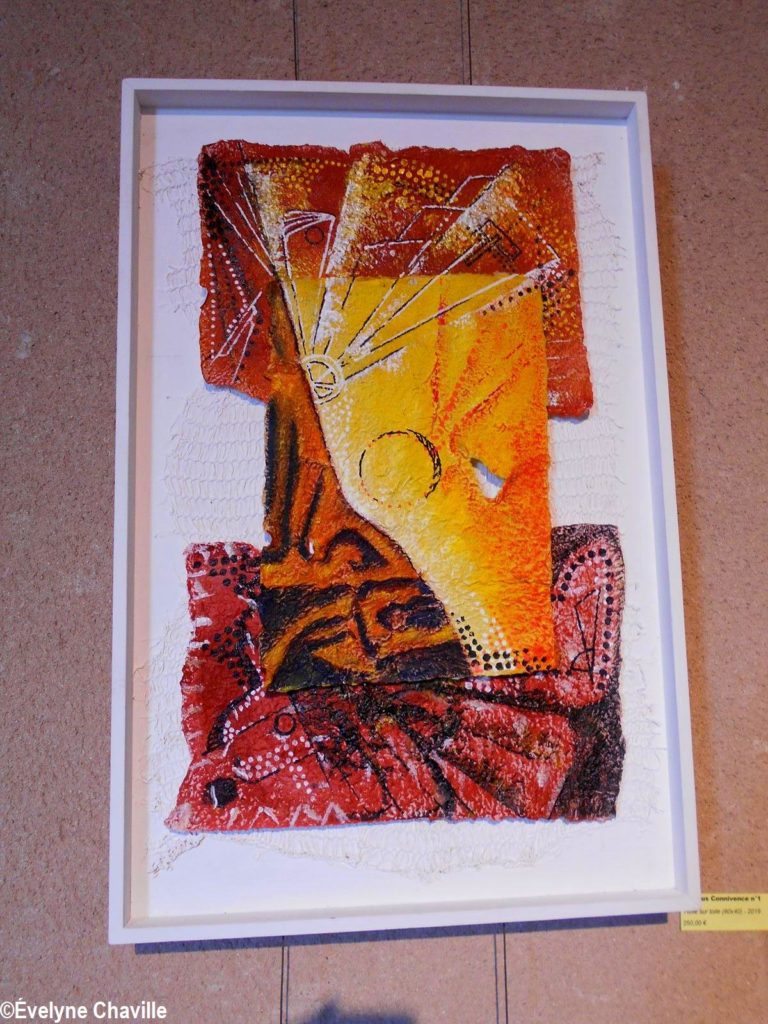 “Horagaï is the name of a shell used by the Samurai in Japan to pass on messages like conch in Guadeloupe. For the exhibition “Connivence 1” in 2009, the first picture I had painted was this big shell, “The liberation of the Horagaï”. All my other paintings were linked to the Horagaï, to this idea of openness. I would like my art resonate with people, Guadeloupeans in particular”, explained Olivier Léogane who is a self-taught painter who discovered this artistic discipline through street art: “I was 14 years old, my artist name was “Clyde” and I belonged to the “crew” which was called “Artistes en Mouvement”, he remembered.

The discussion between the father and his son was also about the paint used, the presentation of these works painted on this local paper, the format of the frames… If the son opted for acrylic, the father chose oil paint. “In 2012, during our last exhibition together, Klodi Cancelier and I left this paper neutral, this time it was painted. It was necessary to have another way of painting like first putting a first coat of very diluted paint, then putting as many coats as desired”, Lucien Léogane explained. 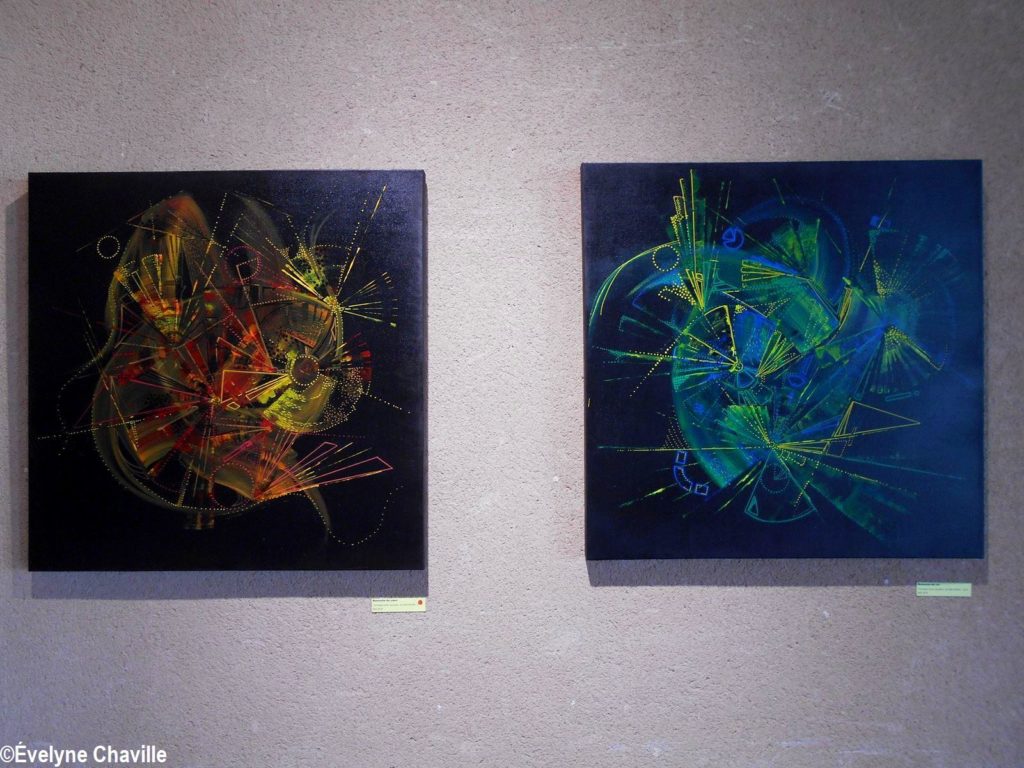 In addition, in order to highlight the papyrus and papyragaï creations, the two artists often chose a black background “to make the effects of the matter and the colours stand out”, said the father. He preferred a background made from dried banana leaves for example, his son wanted a background without relief. The two visual artists also decided not to put a pane of glass on these works in order to let the paper “breathe” the open air.

And what happens: it is a real collection of 24 pieces (12 painted by Lucien, 12 painted by Olivier), with a size 50cm x 50cm, which was created by the two artists in “Connivence 2”. “For “Connivence 1″, I presented 14 works of a rather figurative style. Today, I still have a message to convey but I chose, like my father, the abstract style”, Olivier said, “we have a predilection for the abstract with its share of visible and non-visible and its share of imagination”, Lucien said. In addition to this “papyrus-papyragai series”, the exhibition consists of, among other things, 3 works called “Farandole1, 2 and 3”, 3 works called Boussole de l’Esprit”, “Boussole du Coeur” and “Boussole de Vie” by Olivier Léogane, 2 works called “Papyrus Connivence 1” and “Papyrus Connivence 2” made together or 2 large paintings by Lucien Léogane: “Blue Dream” and “Amorce”. 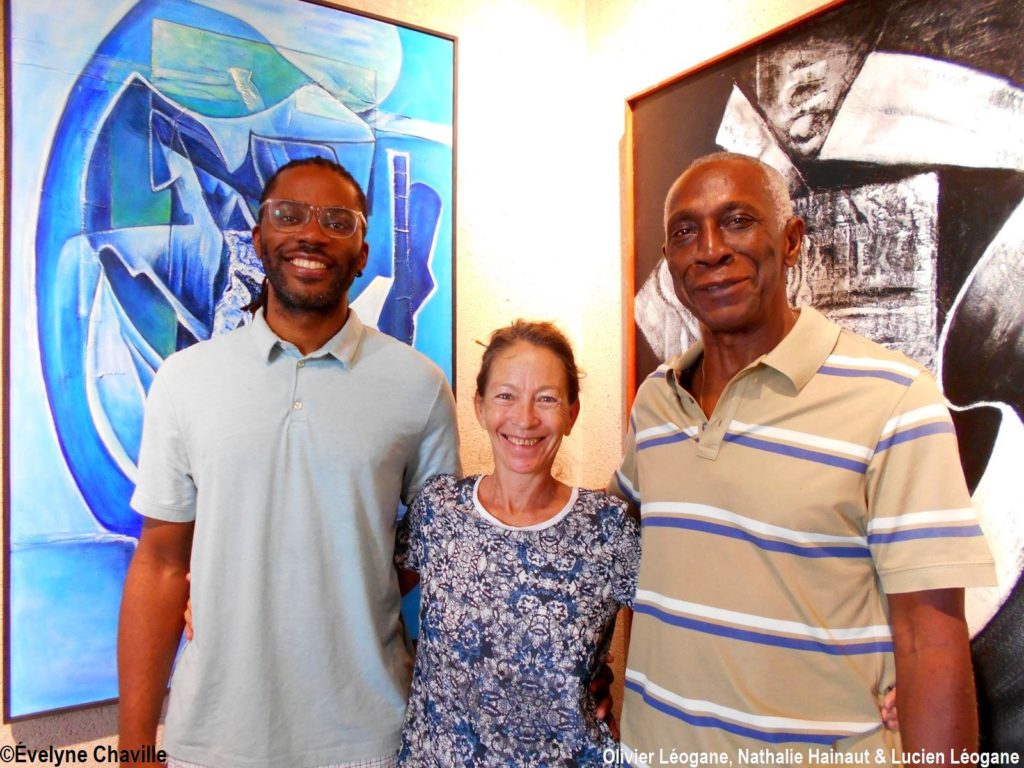 A son with a sharp mind

If Lucien Léogane worked exclusively in the artistic field by being a visual arts teacher in high schools, at the Centre d’Arts Plastiques in Le Lamentin and at the Centre des Métiers d’Arts in Pointe-à-Pitre, his son Olivier (39 years old) who has a doctorate in chemistry has been working at the University of Montreal for 7 years. He was first for six years a chemical risk management advisor and, for a year, he has been a fire prevention coordinator. In 2015, he created his company, “Création Horagaï”, which works on three axes: the artist’s exhibitions; art and science workshops and conferences; events. In 2017, the director of the “Pint of Science Festival” asked him to take over the reins of the Creative Reactions Festival, an event where art is intended to popularize science. Olivier Léogane, who already sold 3 of his works in China and who collaborates with a gallery in Sweden, said he has “a very healthy relationship” with his art: “I paint just for fun”, he added. He is also very happy with the warm welcome the public gave them in Guadeloupe, ten years after the first part of the “Connivence” exhibition. As for his father, Lucien Léogane, he said: “Organizing this exhibition with Olivier is an immense joy. We are connected. He does things that serve me, he has a very sharp mind“.

A third part of “Connivence” is surely to be expected… 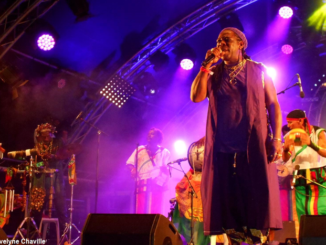 A “Music Plan” and a €1 million fund for Guadeloupe, Martinique, Guiana, Mayotte and Reunion

Guadeloupe celebrated the arrival of the first Indians