KARICULTURE.NET interviewed Jack Gilles who was first an architect and, as an artist, he claims his freedom to create and exhibit. 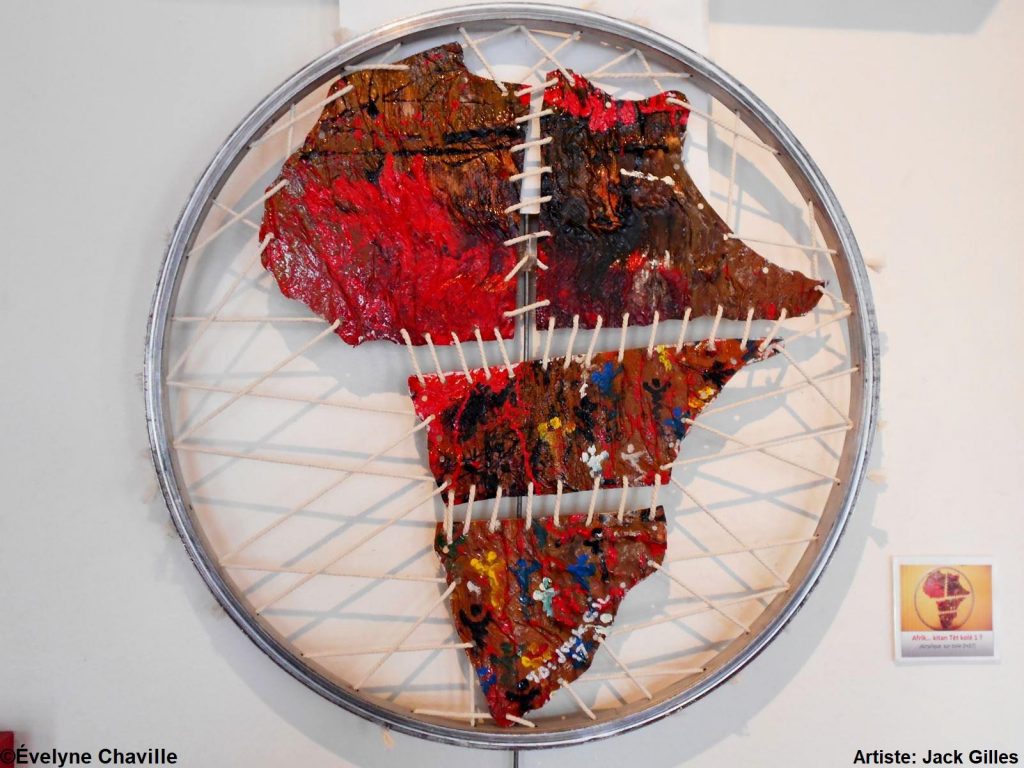 KARICULTURE.NET: Africa inspired you to realize this exhibition but it was not the first time you went there. This time, what inspired you so much on the African continent so that you run into your studio to paint on this theme?

Jack Gilles: Indeed, at first, I wanted to pay tribute to the group composed among others of poets of “Réseau Poétique Guadeloupe” and musicians with whom I was in Senegal but, as I worked, I realized that I was going back to Africa. It is not the first time I work on Africa. In 2010, I went to Senegal where I attended the “Gorée Diaspora Festival” and an international conference entitled “Les Îles, Lieux de Paix, de Mémoire et de Réconciliation: Ouvrir la porte du Retour” (The Islands, Places of Peace, Memory and Reconciliation: Opening the Gate of Return). My poet friends recited poems on stage and I drew a big key because while walking on the beach, I had found a key. I thought it was a sign, I cried… I thought about my ancestors and their suffering… As the quote says: “There are no accidents, there are only appointments”. This key, I kept it very carefully, it is fixed on a painting and, in 2012, I made the exhibition entitled: “La Clé, Couleur Re-Naissance” (The Key, Color Re-Birth). 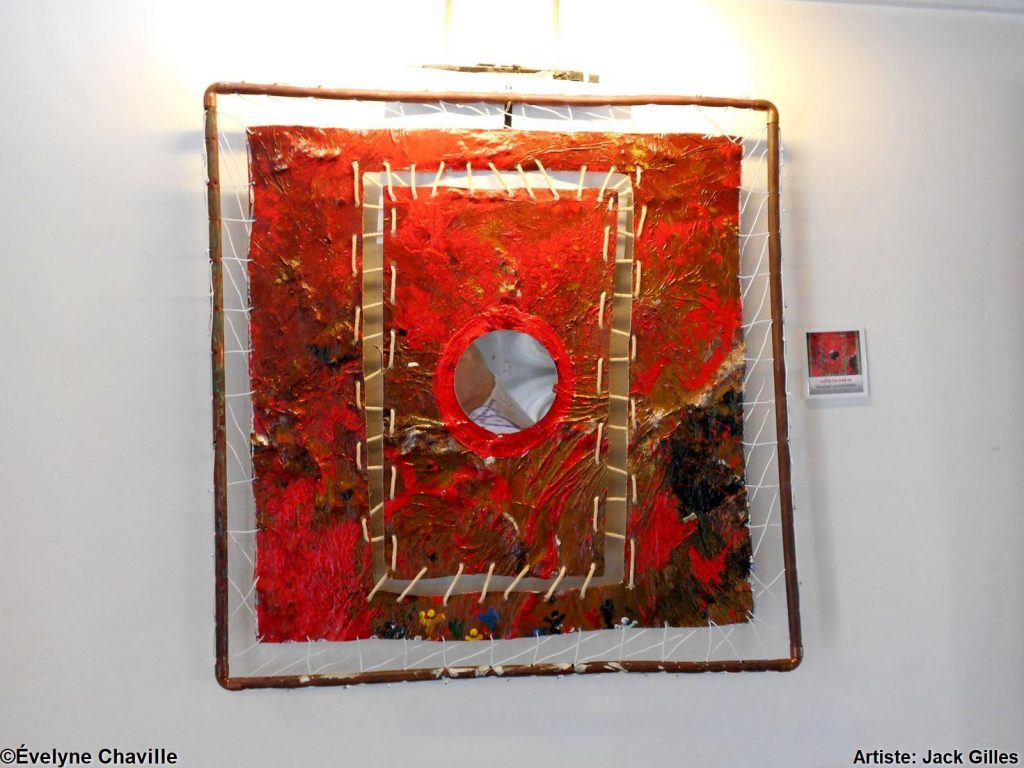 KARICULTURE.NET: Do you have a very intimate relationship with the African continent? Do you consider yourself first a Guadeloupean, a Caribbean and then an African or is it the opposite?

Jack Gilles: I have been to Africa four times and three times to the island of Gorée. I know the mayor of Gorée now… I consider myself an African first and more particularly a Senegalese. In Africa and especially in Senegal, I feel at home. 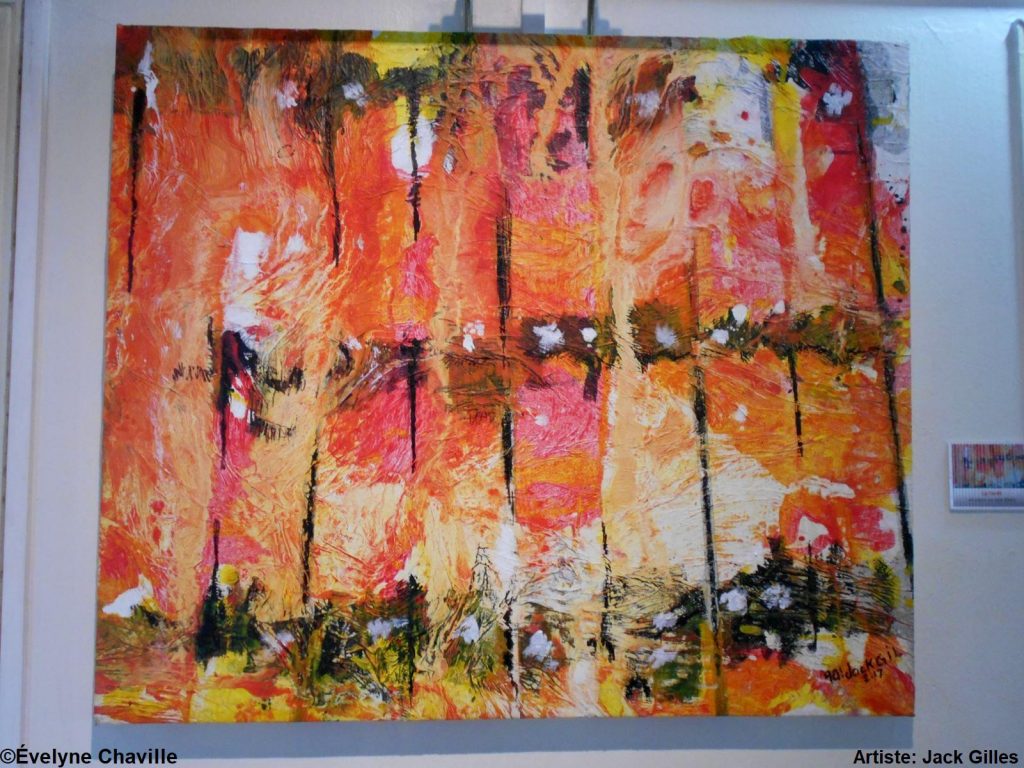 KARICULTURE.NET: You no longer need to be accompanied to go to Africa now. Do you have any painter friends there?

Jack Gilles: Yes, I have African friends who are painters. In 2010, I met Lamine Sagna, a Senegalese painter. We worked together for two years. In 2014, in Benin, the person with whom I had to be in artist residency got sick so the hotel manager where I was staying introduced me to another painter. When I met him, I told him that he had a very nice top so he took it off and he gave it to me… I was very surprised. His name is Tchif. Six months later, I invited him to exhibit in Guadeloupe on the occasion of my exhibition “F.A.M. Fanm An Mouvman” at Fort Fleur d’Epée; being the treasurer of the group “Fanm Ki Ka”, I was inspired by these women and by women in general, I decided to pay them tribute. I also know the Beninese painter, Laudamus Sègbo. 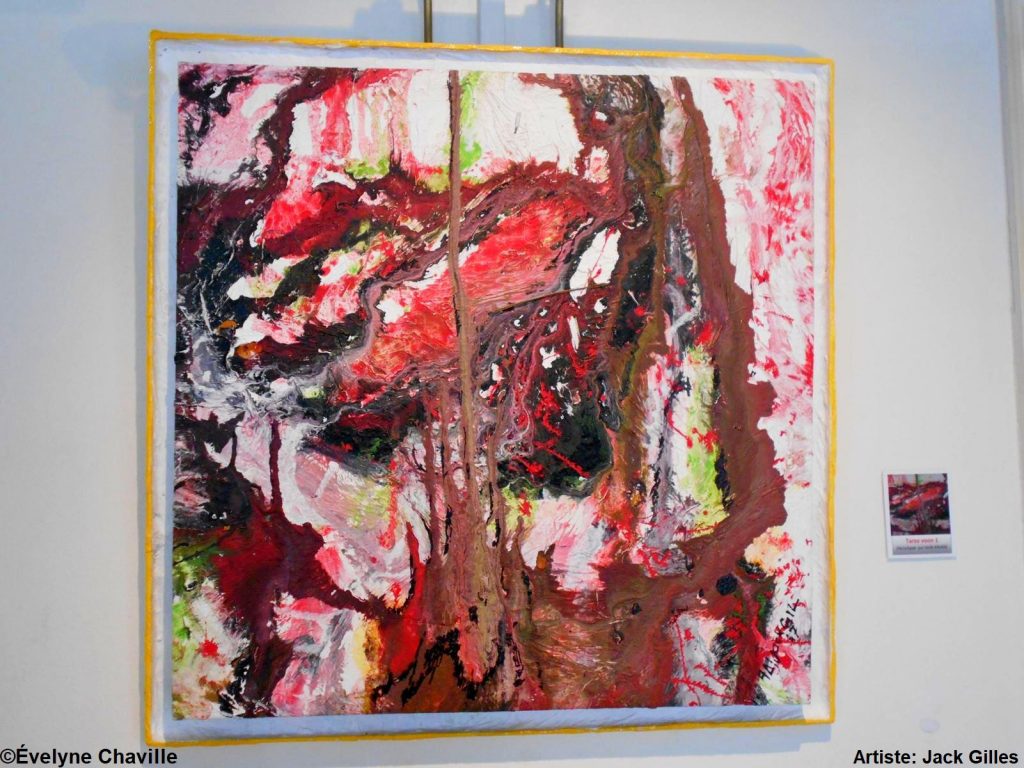 KARICULTURE.NET: In this exhibition “Terre d’Afrique, Terre Mère”, there are works in black and white but there are especially many bright colors, like red. It’s the African influence, inspiration?

Jack Gilles: I am a passionate about art, about life… I use bright colors because I want people to be happy, enlightened. But, white and black are also colors. I am an anti-code. I am a free painter. The works are half-figurative, half-abstract, it goes out like that. That’s also why the subtitle of the exhibition is “Expressions libres”… 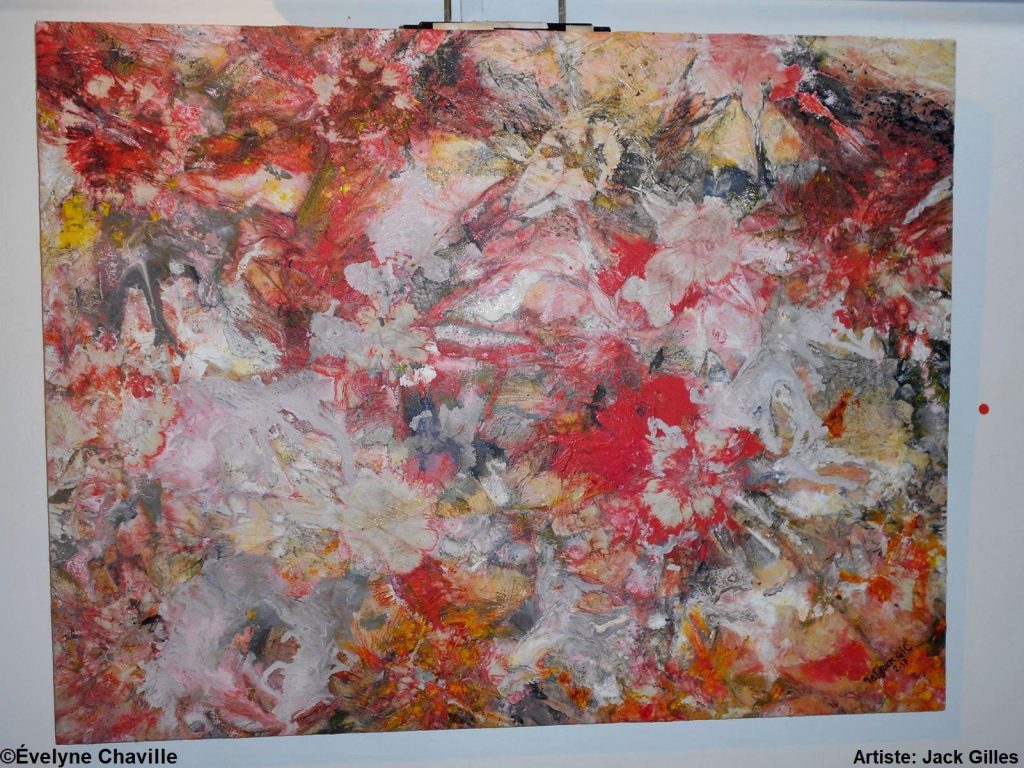 KARICULTURE.NET: What materials did you use for this exhibition? There are acrylic, string… There are works that seem to have been made with a goat skin as for drums-ka, is that it?

Jack Gilles: There are also PVC for the lamps and some paintings, bicycle rims, resin, sisal fibres… On the other hand, there is no goat skin. It’s a particular technique that I use. During my visits to Africa, my friends Tchif and Sagna taught me how to prepare a canvas before painting, it’s a secret that I promised not to reveal. When I prepare a canvas, it is already a work of art, it must be beautiful.

Once in Senegal, I was in a car that broke down, during the repair, I saw a woman who was dyeing fabric. Later, this particular technique was explained to me and that is why some paintings are called “Rufisque” to pay honour to this city where I discovered this method. 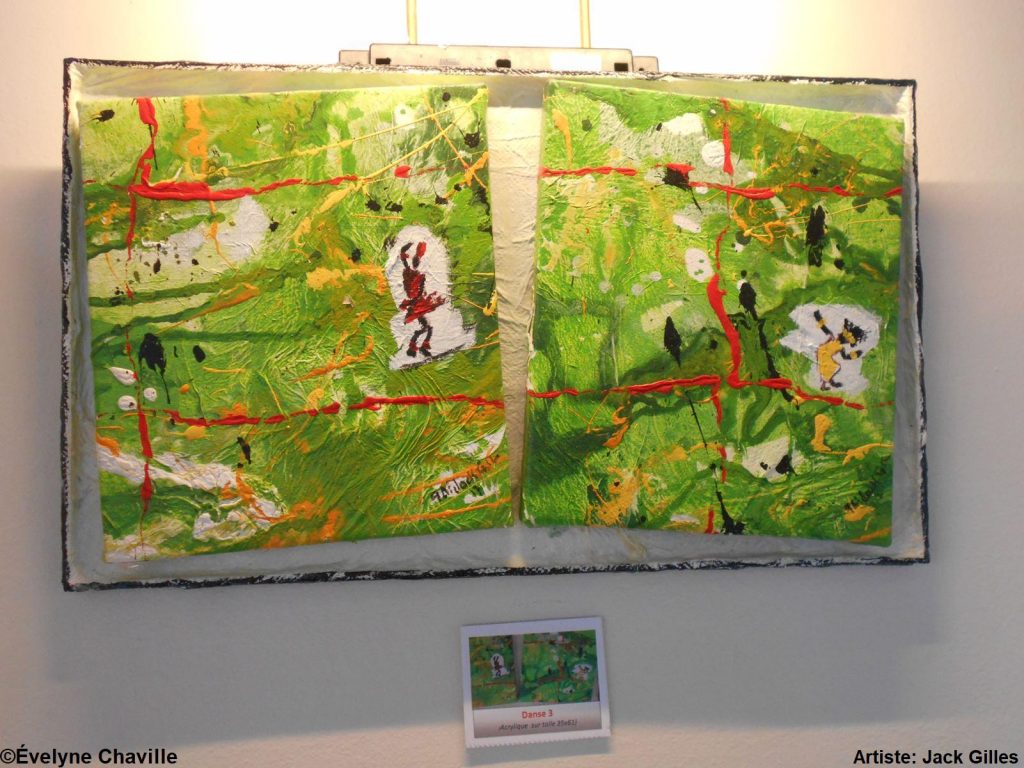 KARICULTURE.NET: “Terre d’Afrique, Terre Mère – Expressions Libres” ” has many works. You have been showing your work very regularly to the public for more than 30 years. This year, for example, it is your 2nd major exhibition. Are you a prolific painter because your “fans” ask for you? When do you think you have enough works when you are preparing an exhibition?

Jack Gilles: This exhibition has 72 paintings and 4 totems (lamps) in homage to the ancestors. I am a free plastic artist, I produce anytime I want and that makes me happy. It is my wife who tells me to stop painting to eat and who tells me to stop producing if I have a sufficient number of paintings for an exhibition. About the exhibitions, I do not organize them at specific intervals. 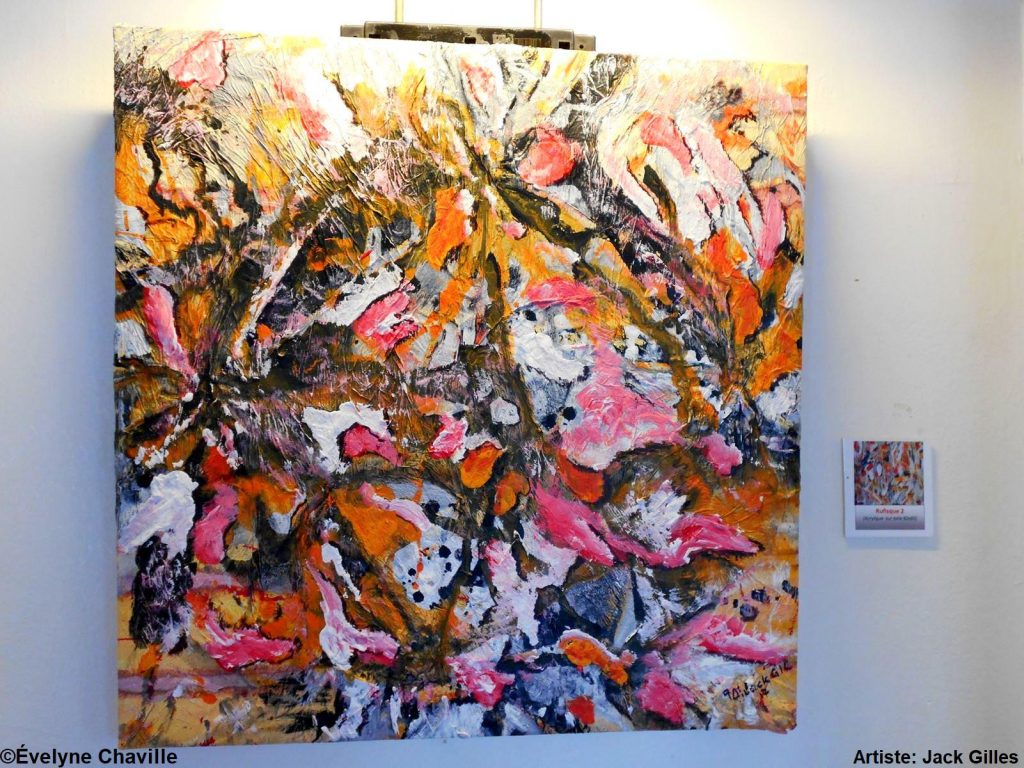 KARICULTURE.NET: So you produce a lot. In addition to Guadeloupe, Martinique, New Caledonia, France, Belgium, Canada, the United States and Senegal are among the places where you showed your work. Is it easy for you to sell your works? Is there an emotional link between you and your works ?

Jack Gilles: There are works that I cannot sell, it’s true. Over time, I learned to separate more easily from my creations. Doctor Jean-Marie Pean had told me, one day: “Consider your works as your children, one day they must go”. That helped me. The exhibition in New Caledonia, “Couleur Cannelle”, I did it in 2006 with my son Olivier Gilles who is a poet and a slammer. It was a travelling exhibition, love was the message that was delivered. 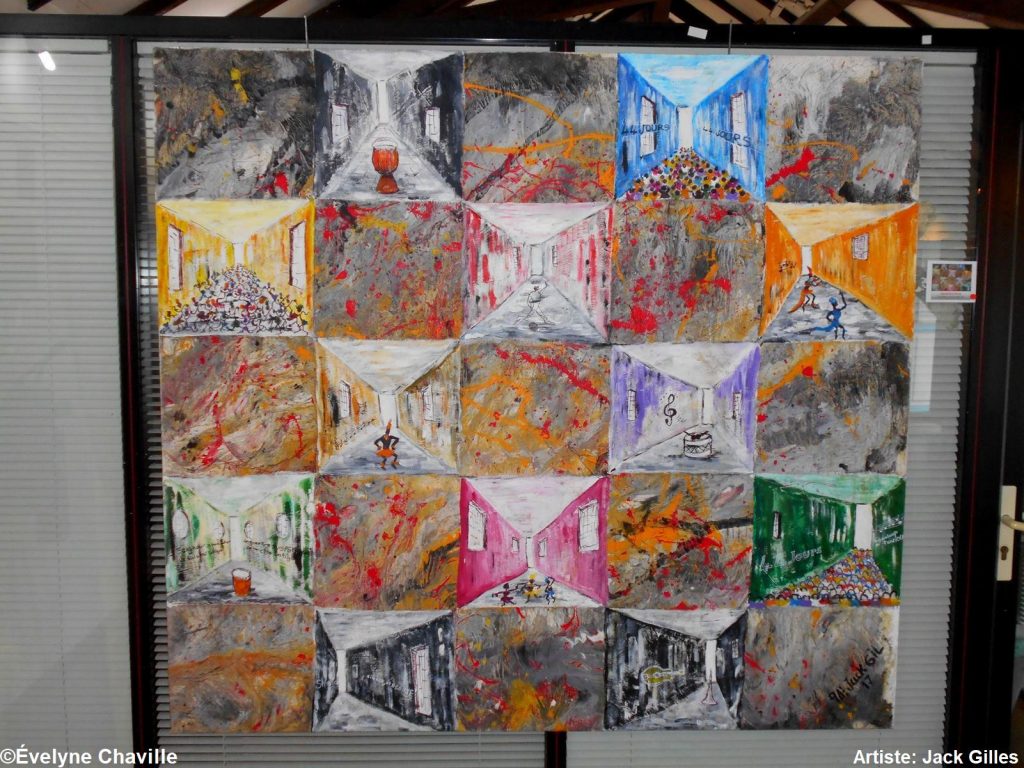 KARICULTURE.NET: In 1984, you studied at the “École d’Arts Plastiques” in Saint-Denis, France. You already painted, what did this training bring you?

Jack Gilles: I began painting at the age of 13. My father who was a building contractor built the new family home in Dugazon and he allowed me to paint on the walls of my future room; I had drawn the sea, coconut trees and a beach. My first real personal exhibition in Guadeloupe – “Émotions” – was in 2000 at the OMCS of Sainte-Anne with Didier Gillet. Before the 1980’s, I had done an art show dedicated to tennis. My mother still has a painting that I had made when I was very young, it represents the Allée Dumanoir in Capesterre Belle-Eau, with the arch that still existed at that time.

The École d’Arts Plastiques taught me the techniques, the choice of colours, the nude etc. Students were not many. I learned a lot… 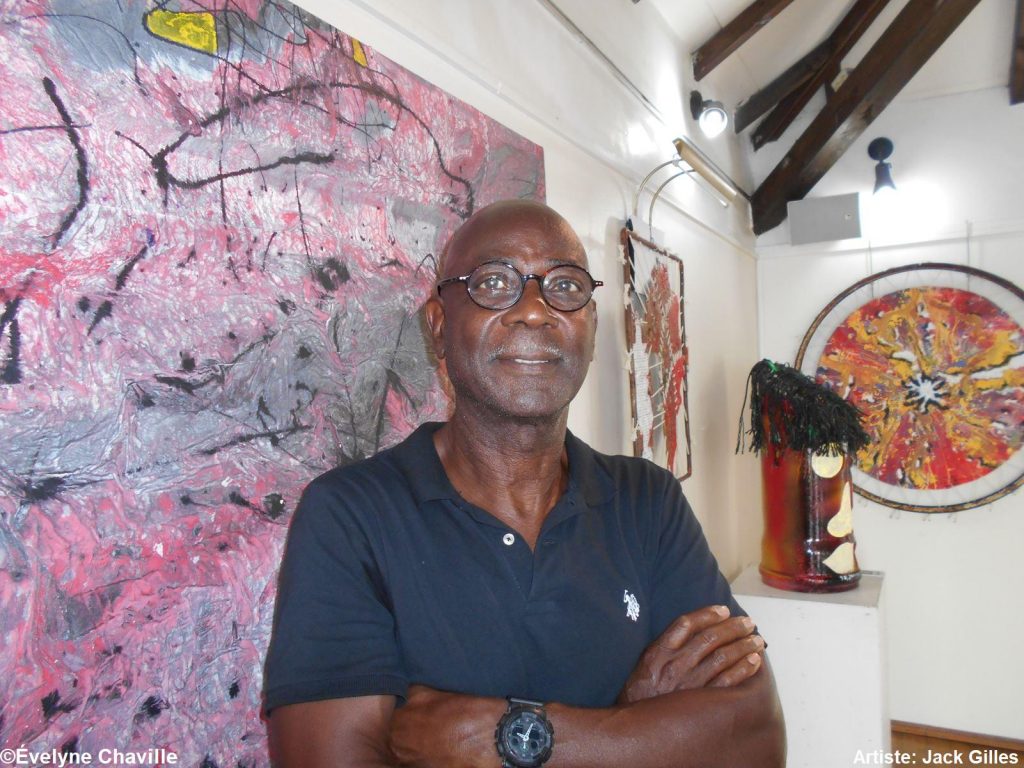 KARICULTURE.NET: With a career spanning more than 30 years, have you noticed any change in Guadeloupean audience behaviour in its approach to painting, fine arts? Today, does this audience come to visit an exhibition more easily than before?

Jack Gilles: This is a positive evolution, now people come to see an exhibition more easily. Children also come and ask questions. Some people have been following my work for many years and they write their comments in the “Guestbook”. 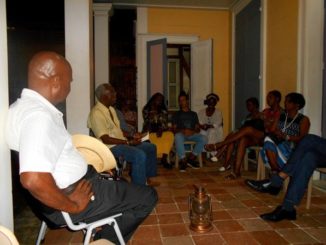 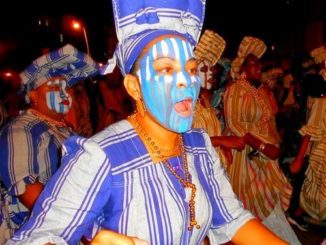