Founded four years ago by the plastic artist Jipé Fronton who wanted to make accessible plastic arts in the capital of Guadeloupe, Basse-Terre, “La Maison de l’Art” is a dynamic gallery that offers plastic-arts workshops to children and adults, rents its premises to artists wishing to exhibit their works and organizes meetings with the public during the nights called “Ti Kozé” in the presence of exhibiting artists. 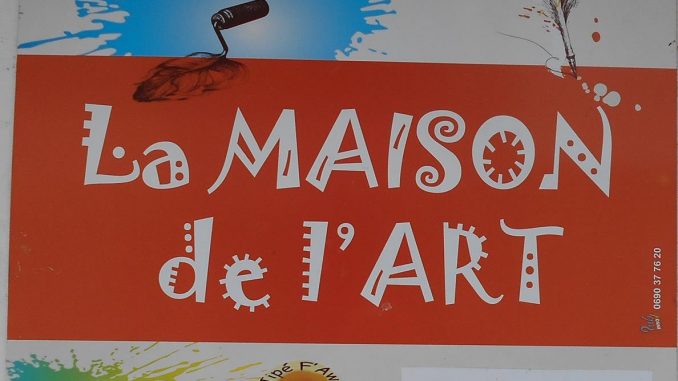 The first art gallery “La Maison de l’Art” was created in 2012 by the plastic artist Jean-Pierre “Jipé” Fronton. It was settled in a room near the bus station in the city of Basse-Terre, which was provided free of charge by an inhabitant. Two years later, “La Maison de l’Art” moved to Baudot street in more spacious premises of 85m2 loaned by the town hall of the capital.

After four years of existence, the gallery shows some interesting statistics about its visitors, its activity. Indeed, more than 80 exhibitions (by children and artists) were already organized there and almost 8,000 people already visited it.

It must be said that the association Jipé F’Awt, chaired by Odile Cladier, which runs it is full of ideas to attract the public and the artists.

People who go into the gallery receive a warm welcome and at once feel at ease.

They can discover the “Salle Mémoires” (Memories Room) which refers to the slave trade. This one was thought and realized by Jipé Fronton who is also the artistic director and the exhibition curator at “La Maison de l’Art”. He got this idea before the opening of the Memorial ACTe in Guadeloupe. “Its design is from a book I wrote and which later became a play entitled “Memory”. We find there among other things a slave ship, paintings that I made, chains that symbolize slavery, busts of historical figures like that of Victor Schoelcher and Governor Gourbeyre, newspapers with articles about slavery put here and there on the ground”, he says. A brilliant lighting was made by the artist who is also a lighting designer, a machinist and a sound technician. Because the “Salle Memoires” is closed for the staging, that piques the curiosity of visitors who try to see inside through the glass of the doors… A video – which tells the slave trade from the European shipowners, via the African continent, to the arrival of the captives in the colonies of the new world and stops at the time of the abolition of slavery in 1848 – helps to understand this permanent exhibition. 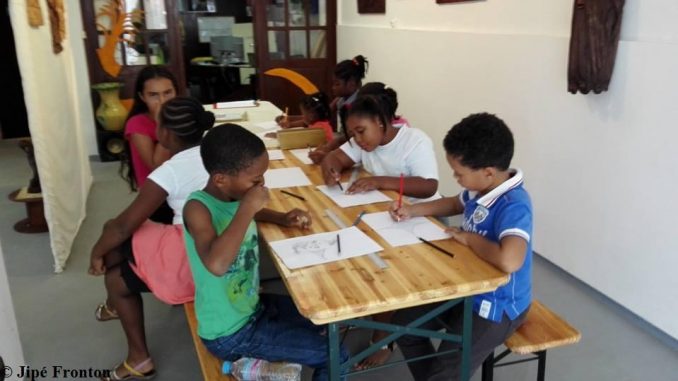 Interesting services which sometimes are neglected

Every Wednesday morning and afternoon, children are welcomed to the gallery in the “Ti Moun Dali” plastic arts studio where they can make appeal to their imagination, their creativity. At the end of June, these young budding artists exhibit their works and many parents and friends come to admire their artistic prowess.

In addition, the “Ti Kozé” are very popular. These discussions about artist’s works who exhibit in the gallery attract a hundred people and are organized by the association between the second and the third week following the installation of the exhibition.

Two offers are proposed to artists who wish to exhibit at “La Maison de l’Art”: “The first one concerns the collective exhibition, thus with several artists. The leasing duration is one month, we ask 150.00 euros per artist. We make the flyers to inform the public. On the occasion of the opening, we send the invitations to people we know and who are art lovers, drink and appetizers are provided.

Our second offer is aimed to individual exhibitions, thus to only one artist but we can accept two artists. The leasing duration is also one month, we ask 500.00 euros per artist. Here too, we realize the flyers and send the invitations through contacts we established however we do not take on responsability for the catering during the opening”, explains Jipé. Unfortunately, these offers that could be considered interesting do not attract much artists from Grande-Terre, according to the plastic artist. “However, we have here in Basse-Terre and in the surrounding communes, real art lovers, when we contact them, between 150 and 200 of them are present at the openings and they buy the works they like. Nevertheless, many artists prefer to exhibit in Pointe-à-Pitre or somewhere else in Grande-Terre”, says the artistic director of “La Maison de l’Art”. 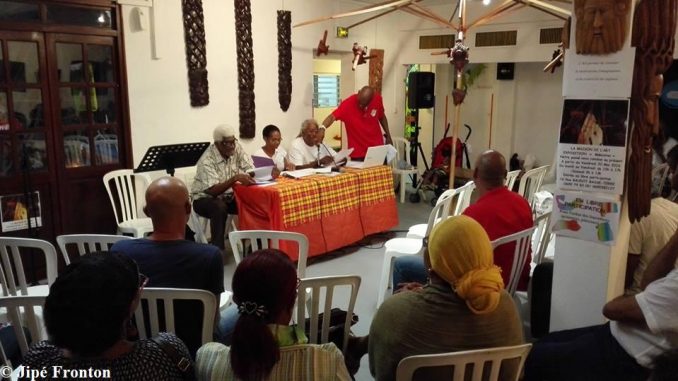 To democratize the plastic arts

It is always surprising to hear some people from the Grande-Terre area declaring that to go to Basse-Terre – the capital of Guadeloupe, located 45 minutes from Pointe-à-Pitre by driving on major national roads – is too far. It is absurd because these same people travel to France in order to work or to spend holidays and they stay 2 to 3 hours every day in various public transports (suburban train, RER, metro, tramway and bus).

These little annoyances do not prevent “La Maison de l’Art” from continuing its mission to democratize plastic arts. Since last October, visitors can admire the magnificent creations in mahogany and pear by the sculptor from Haiti, Joseph Décibricé. They are highlighted on the many walls of the premises. Of course, the latter received all the services offered by the gallery, in particular he enjoyed meeting the art-loving public or the “novice” public.

The association Jipé F’Awt has many projects to develop more the attendance of “La Maison de l’Art” with the Guadeloupean public who already enjoys the artistic creation and the “novice” public who wants to visit the gallery in all simplicity but also with artists from Guadeloupe and the Caribbean.

“We thank all those who helped us to make these project of art gallery in the capital, especially the municipality of Basse-Terre and its mayor, Marie-Luce Penchard”, wishes to stress Jean-Pierre Fronton.

Basse-Terre is more than ever a city of art and history. 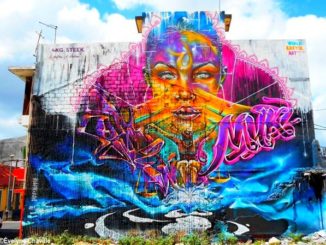 Steek, the triple Bodypainting World Champion, participated in the WKAF 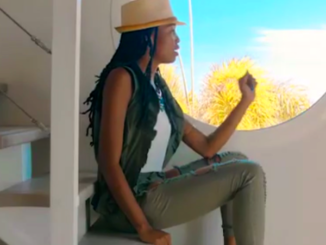 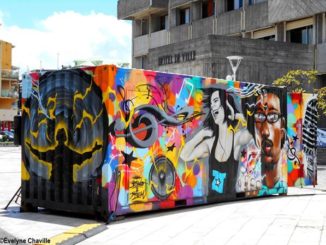