During this 9th edition of the “Pool Art Fair Guadeloupe”, a stand attracted all eyes, it was that of the “Collective Rip’ Art” which proposed works of art made with recycled objects. Guadeloupean advertising executive, decorator and visual artist, Félie Line Lucol, who founded this association in 2013 agreed to tell us about her début in art and the work she is doing with her associate, the painter, decorator and visual artist Patrice Léopoldie. 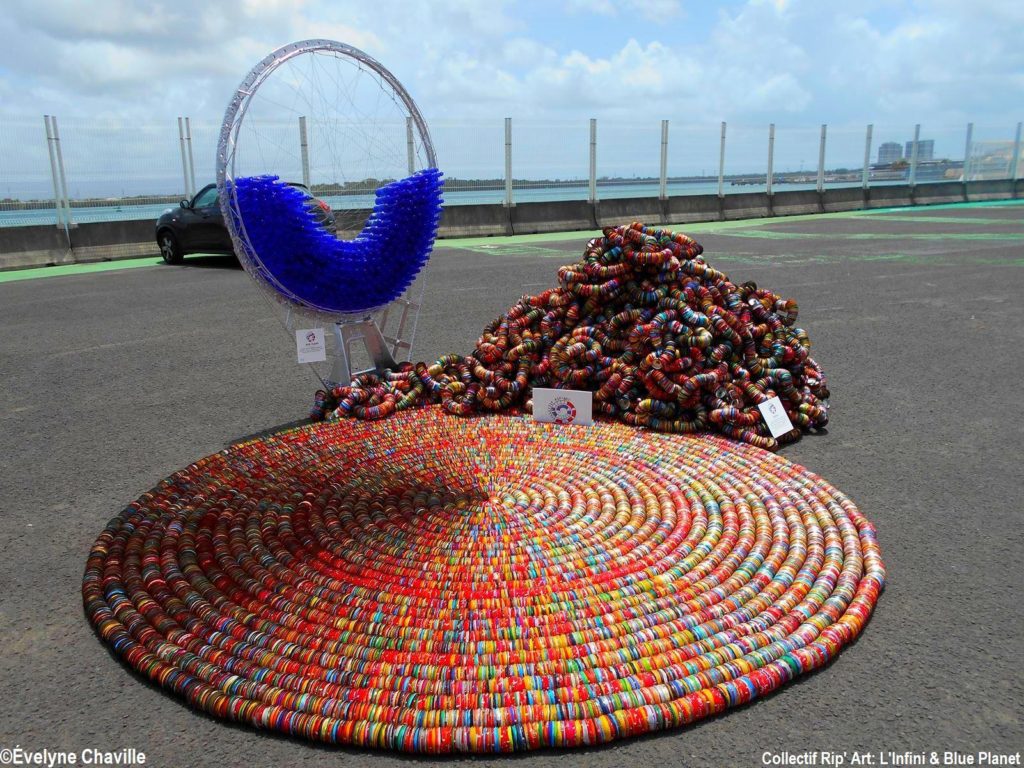 Since early childhood, Félie Line liked to draw. As the eldest in a family of seven children, she had to watch over her siblings and do other tasks to help her mother, but thanks to that passion, she could stand out. “My pencil was a way for me to be appreciated by the others. I drew a lot, I even reproduced the drawings in the “Réveillez-vous” magazine left by Jehovah’s Witnesses at home… At school, I was good at literature, perspective but not at mathematics. At the age of 15, at the end of the 8th grade, I had planned to go to France to enroll in a tenth grade F12 in a high school in Poissy in order to study drawing, unfortunately, I arrived after the start of the school year and my place was given to another student. It was the beginning of my nightmare”, told Félie Line. After that “failure”, the girl realized that the higher artistic studies she dreamed of starting after her baccalauréat were moving away…

An artist at Disney Park in Florida

However, the teenager who already knew France because she had already lived there when she was between 8 years and a half and 13 years old decided to stay in Europe to enroll in a high school for a normal tenth grade but, finally, she chose to prepare a Brevet d’Études Professionnelles (BEP) because she found the creativity she was looking for so much by learning creation of clothing, decoration of showcase etc.

After her baccalauréat, she enrolled at the Chamber of Commerce of the 6th arrondissement of Paris to study for a Brevet de Technicien Supérieur (BTS) advertising and decoration ; she wanted to become an interior designer. Fate will decide otherwise. “As part of a cultural exchange with France, the Disney World Company came to the Chamber of Commerce to present a competition it organized. It was looking for artists, especially those who knew how to draw but who had not studied in an art school, so I applied”, said Félie Line. Out of the 50 applicants, the young Guadeloupean was among the 5 who were chosen to go to Florida. “During 18 months, I worked on Dutertre Square in the Disney Park. The visitors sat in front of me and, behind my easel, I drew from life their portrait in pencil, watercolor, pastel, etc. It was a good experience”, said the artist. About her stay among the Americans, she remembered rigour, precision and a job well done…

Thanks to her experience in the United States, she was one of the referent “Cast Members” who participated in the opening of EuroDineyland in Marne-La-Vallée in 1992. A few weeks after her arrival, she gave birth to her son. In France, Félie Line was no longer an artist, she was a waitress at the restaurant “Le Blue Lagoon” . In 1997, she left Eurodisneyland and returned to the Chamber of Commerce in the 6th district of Paris to do a refresher course in advertising and decoration.

Because she did not find a job in these branches, in June 1998 she joined the restaurant chain “Hippopotamus” and, after eleven months of training, she became a leader head waitress. If her monthly salary was very comfortable during four years, the young woman had to work at night, an awkward situation because she had a 7-year-old son. In 2001, Félie Line was going through a bad phase in her private life, so she resigned from her job and, on January 1, 2002, she landed in Guadeloupe to recharge her batteries. For three years, she got back on her feet again by drawing frantically and recycling objects ; the constant encouragement from her son and mother helped her to face up to this difficult moment and especially to regain confidence. 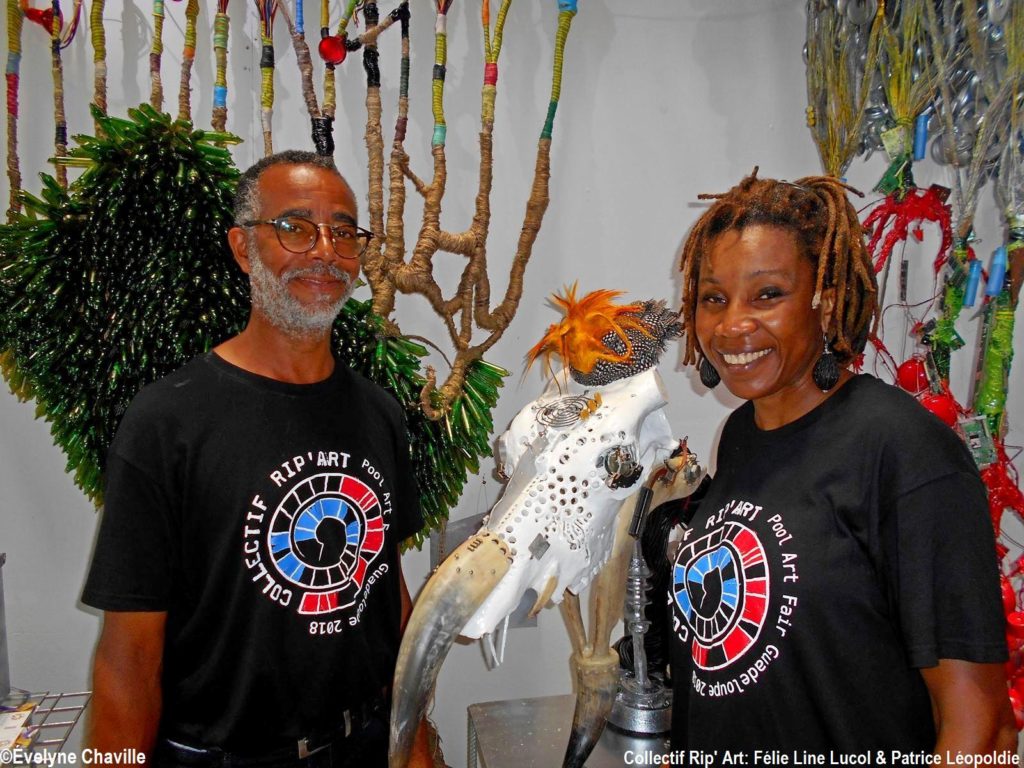 “One day, Alex Nabis came to my house and he saw what I was doing and he told me to bring my drawings, my bottles and my pebbles to participate in “Nwèl Kakado” in Vieux-Habitants. The public liked my work”, said Félie Line. Then, things happened very quickly. The Direction des Affaires Culturelles (DAC), the Agence Régionale de Santé (ARS) and the Education Authority of Guadeloupe started to be interested in her job. In 2010, her son and first fan who inherited his mother’s artistic gift (especially that of drawing), went to the prestigious École Boulle founded in 1886 in Paris to study jewelery. In 2012, she organized her first eco-designer exhibition which was a success. In 2013, she founded the “Collectif Rip’ Art” association.

Her current associate is painter, decorator and visual artist Patrice Léopoldie. “I have 100,000 ideas in my head I set out to Patrice. He brings the material and technical part and he also has ideas. We understand each other and we complement each other ; in addition, there is a lot of handling to do. We are not afraid of hard work and sometimes we sleep in the workshop when we have an item to finish”, said the visual artist. 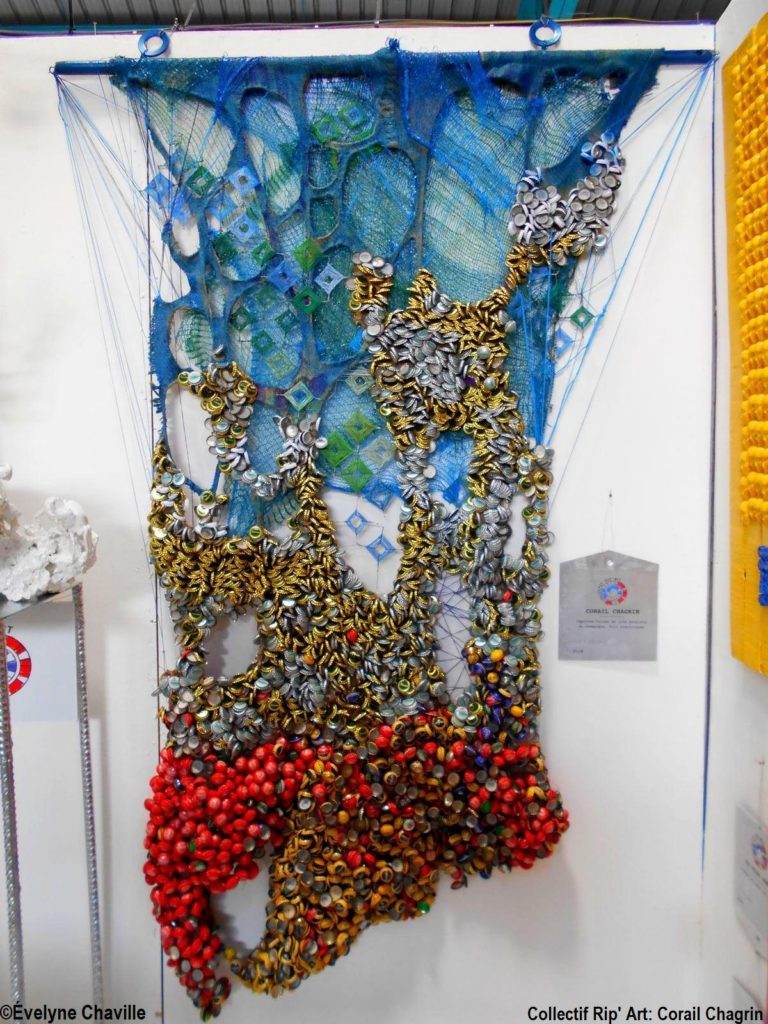 Works of art with messages

It was the second time that Félie Line Lucol participated in the “Pool Art Fair Guadeloupe” which took place from June 22 to 24 (Patrice, the 1st time). For this event, Félie Line and Patrice worked for two and a half months to produce the thirteen items presented in their stand. “We also discussed a lot and had several tries before producing the works. We stayed true to what we used to do, the items are only smaller. We usually make monumental works and installations”, she said. Among the items, there were three hangings that attracted visitors : “Marie Séraphique” is inspired by a slave ship and composed of 432 empty sardine cans and 1 800 nails symbolizing the slaves who are lying down ; “Strange Fruits” is made up of hundreds of phials, hessian and electric wires ; “Corail Chagrin” which represents the extinction of coral is composed, among others, of hundreds of red and gray bottle capsules and electric wires. There was also “Le Trône” which is made up of components of the Darboussier and Comté sugar factories respectively in Pointe-à-Pitre and Sainte-Rose ; note that the former President of the French Republic, François Hollande, had been photographed with this original chair during his visit to Guadeloupe in 2015. 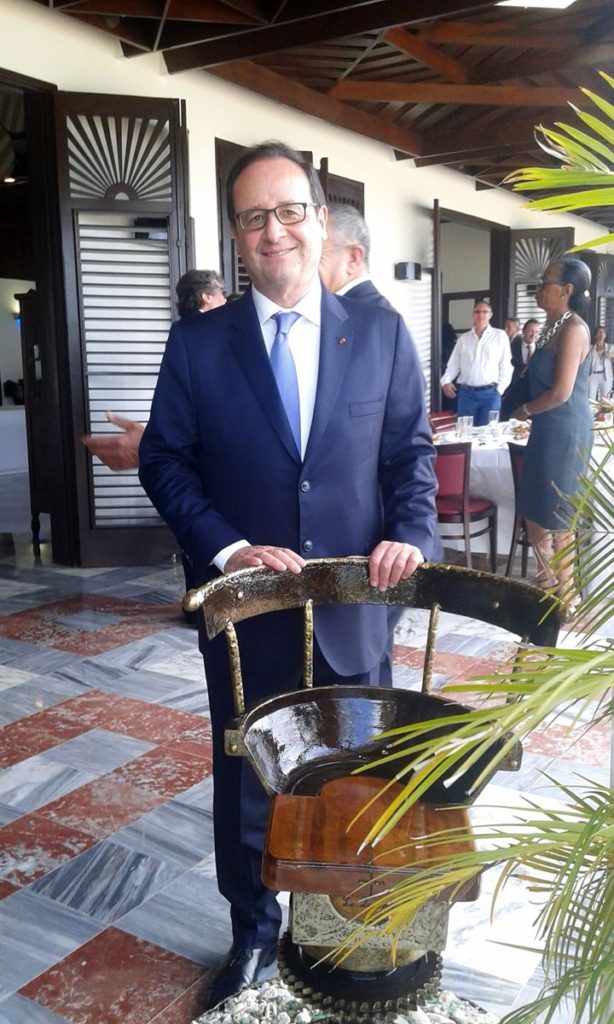 Félie Line and Patrice collect most cans, capsules and bottles from the streets. “We do our biggest collection during carnival, at night, after the parades and until 6:00 am. In the beginning, people were surprised now they know us, the garbage men are quite nice with us”, said the artist. Then, this treasure is stored in their workshop.

In order to succeed in its mission in eco-citizenship, the “Collective Rip’ Art” goes to companies but also to schools to make children and teachers aware of recycling.

After about fifteen years in recovery, Félie Line Lucol is happy to have found her artistic and professional way, she thinks she has no cause to be jealous of those who had the opportunity to study in an art school. “People find “incredible” that I did not study at the Beaux-Arts but I do not regret, my gift has not been influenced… Today, I am a free artist, I do what I like in art and I gave the rubbish its nobility. Thanks to recovery, I discovered who I am and I learned to love myself. I am the most comfortable artist woman on the planet with an autonomous son”, said the visual artist. She only would like her work to be recognized and one day the “Collective Rip’ Art” represents Guadeloupe in international challenges. 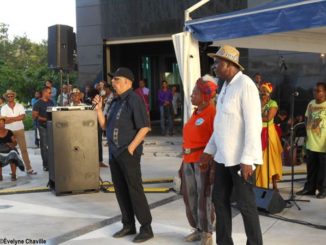