The worldwide Covid-19 epidemic and the threatening weather did not prevent “Les Cuisinières de la Guadeloupe” from celebrating their 104th birthday on August 15. Nearly 150 ladies and about twenty gentlemen of the association therefore participated in the annual event, respecting the “barrier gestures” established by the health authorities.

This year, only the traditional mass in the church of Saint-Pierre and Saint-Paul in Pointe-à-Pitre was maintained, all other popular events were cancelled, namely: the parade through the streets of the city, the musical stop on the ground floor of the Ruddy Nithila center and the large banquet at the Paul Chonchon sports hall in Bergevin.

This religious ceremony began at 11:00 am, and it was not celebrated by Father Édouard Silène, the parish priest for three years, but for the first time by the Bishop of Guadeloupe, Monsignor Jean-Yves Riocreux. As for the choir, it came from the town of Saint-Claude. It should be noted that the hundred or so faithful who joined the Cuisinières de la Guadeloupe to participate in this mass in honor of the Virgin Mary on this Assumption Day and Saint-Lawrence, the patron saint of cooks, were happy to return to their church, which had been closed during the week since June 8. This date of August 15 was also the date of the reopening of the building with the completion of the most urgent works (roof waterproofing and electricity) carried out by the Regional Council of Guadeloupe.

On the occasion of this 104th edition, the association chose as patron of the event Sylvie Stewart (affectionately nicknamed “Mamie” by all) who has been selling flowers on the Place Gourbeyre, in front of Saint-Pierre and Saint-Paul church, for many years. In these times of Covid-19, this great patron who always has a kind word for everyone perfectly symbolizes the qualities that Guadeloupe needs, i.e. courage, self-sacrifice and solidarity. Qualities that the founders and former members of the association “Les Cuisinières de la Guadeloupe” also put forward and which enabled the association to get through all these years. Sylvie Stewart (80) worked her whole life to take care of her 17 children and she is not a stranger as she was elected “Super Mamie France 2004”.

After the mass, which ended around 1:00 pm, the Cuisinières did not forget to give out some cakes to the crowd and then the procession went to the Pavillon de la Ville located a few meters from the church where everyone was sprinkled with rum as a welcome. Rony Théophile, the president of the association “Les Cuisinières de la Guadeloupe” who had already thanked all participants in the church invited the personalities present to speak and all of them wanted to preserve the culinary heritage of the archipelago. At about 2:00 pm, he began to officiate the induction ceremony of new members… 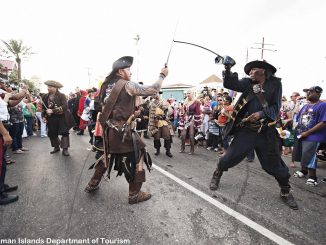 The pirates are back on the Cayman Islands ! 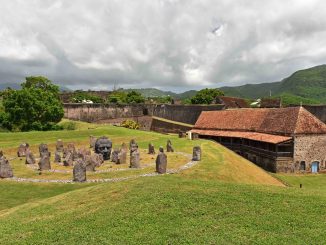