Some speak about a total expenditure of 5 or 6 million euros! If for young people who only know euro – the European currency came into force in 2002 – this sum may not represent a lot of money, for older people (since we are told all day long that Guadeloupe will soon be a French region with “old people”) who knew the franc, it represents a sum between 33 million French francs and 40 million French francs and, immediately, we take the measure of this amount of money that was invested in this carnival…

In general, when you invest so much money, you are certain to be repaid, to obtain financial spin-offs or other benefits. When you start a business, you are asked to do a market study, to present a business plan and, whatever the step you undertake – especially to apply for a grant – this is the first document that they ask you. Whoever can give you a loan or a grant, wants to know how much money your future business can earn. This famous “Business Plan” is essential even if you do not reach the figures announced there. The question we can ask when we see this astronomical sum that was invested in the carnival of Guadeloupe in 2019 is : on what basis was invested all this money? What document was used to spend these millions of euros for the “young people” or millions of French francs for the “old people”?

We heard an elected representative of an urban community announce on the radio the amount of 453 000 euros then, on last Sunday, March 3, the sum of 550 000 euros because security and other charges had not been counted. The same elected representative announced that a study would be entrusted to a center based at the University of Fouillole to know the economic spin-offs of carnival. How much will cost this study? Last year, there was already workshops on carnival organized by this same Urban Area Community ? All these endless discussions have a cost. How many studies will it be necessary to organize? The center in Fouillole chosen for this study deals with politics, why economists have not been responsible for this work? It’s very strange…

This document, which can be compared to the essential business plan of the entrepreneur, should not have been done before investing this enormous sum for the carnival organization in only 3 towns in Guadeloupe? Moreover, the parades on these 3 cities are done with the participation of other towns of the island; for example, during the parade of “Dimanche Gras” in Pointe-à-Pitre, less than fifteen groups – out of 40 – were from these three cities. If this urban community wants to create on this territory a carnival with the “skin groups” where they are many, therefore we can speak of specificity and characteristc carnival of this territory… Today, the creation of this carnival with 3 cities while Guadeloupe (1704 km2) needs to unite is a major aberration. Announcing € 453,000 then € 550,000 invested in various carnival events in January and February is simply a way to show the financial firepower of this urban community…

At the present time, what region of France would have invested such a sum in a cultural event without knowing the possible spin-offs? Any. What island in the Caribbean would have spent so much money on carnival without knowing if foreign currency will go be earned? Any. They talk about tourism spin-offs, which is a good thing but, I have been asking the same question to the tourists I meet in Guadeloupe for over twenty years : “how did you come to know the carnival of Guadeloupe?”. They answer that they are surprised and delighted at the same time but the most important thing is that they did not know that there was this carnival in Guadeloupe. In other words, they saw light and they came in… In other words, at no time, the carnival of Guadeloupe was sold abroad as a tourist product, able to earn foreign currencies to the island.

Backpacking tourists or tourists with money ?

Some go to shows or fairs in France or elsewhere with some flyers in their suitcases but do not return with any booking of airline tickets or hotel rooms for this cultural festival.

We heard about foreign journalists who are invited to come and see our carnival but now, tourists are adult and independent, they search online for information and they know that often these people of the press or these “influencers” write beautiful words because they received a glass of rum and two pieces of pudding. They also know that Guadeloupeans are best placed to talk about their carnival. On February 26, an executive of the Comité du Tourisme des Îles de Guadeloupe was interviewed on a local radio station and he told that there were “packages” for the carnival of Guadeloupe available at the CTIG. The next morning at 8:45 am, I went there to get a “package”, the senior employee who received me was unable to tell me what it was, she phoned in several offices for nearly 15 minutes and no one knew what this package was. When I said, as I was leaving, that I was a journalist, she told me to wait, that she was going to see, she asked the housekeeper to stop me, I had already lost enough time. All this is not very serious and we imagine the damage on the organization’s image if I was a tourist.

And then, we must know what type of tourists we encourage to come to Guadeloupe: backpackers tourists, all inclusive tourists or tourists who want to spend money on our island? Often, tourists on the Place de la Victoire in Pointe-à-Pitre ask me where is, in the area, the Écomax supermarket (known for its discount prices), some already know the address and go there directly… The “Village Experience Carnaval”, organized on February 9, illustrates this problem. It was a fiasco and, fortunately, some Guadeloupeans came there because the tourists were not numerous, but the cruise ship “Costa Pacifica” with its thousands of passengers was some meters away at the cruise terminal. When they have to enter a site and buy something, tourists are rare but when they have to enjoy the free streets of parades all are there though they did not come for carnival in Guadeloupe.

The war of cultural tourism is declared

When Cuba organizes its various cultural events, they are sold to tourists through its specialized agency Paradiso. When Dominica organizes its “World Creole Music Festival” at the end of October, several months in advance, its emissaries come to Guadeloupe and Martinique to present and sell this event. A few weeks ago, the lady who organizes the music festival “Hennessy Artistry” which takes place in December in Barbados met with travel agencies in Guadeloupe to sell her reggae festival which will take place next April and she has figures because she spoke about 600 french-speaking festival-goers (Martinique, Guadeloupe or French from France) who go every year to Bridgetown… When the Caribbean islands organize their carnival, they know in advance that their hotels will be full and these tourists will come to participate in the different events. Their carnival is sold as a tourist product.

Tourists who stay in Guadeloupe during the carnival period take advantage of our “free” parades; some carry state-of-the-art cameras and capture everything they see but, what do they do with all these pictures ? And we, “all our teeth are out” (to translate a Creole expression) because we are happy, we were led to believe, a few years ago, that we had the 5th most beautiful carnival in the world! It’s true that our carnival is very beautiful but we must not underestimate other carnivals in the world… We also believe that only our carnival is various (snare drum groups, skin groups and mask groups) but, elsewhere, there are also different kinds of carnivals on the same territory. In the Caribbean, in the Dominican Republic, there is a “modern carnival” but also the “Cojuelo Devils” or the “Guloyas” which is a form of carnival imported in the 19th century by inhabitants of the English islands and Martinique who came to work in the cane fields and was declared UNESCO World Heritage in 2005.

The Caribbean islands are forced to fetch foreign currency. The “cold war” being over, the United States has no reason to help them and Great Britain is embarrassed with its “Brexit”… We, we can count on “uncles” in France to bail out our boxes. In recent years, there were uncle Charles, uncle Georges, uncle Valéry, uncle François, uncle Jacques, uncle Nicolas, another uncle François and now uncle Emmanuel who has already warned us that his piggy bank is empty…

The “anti-systems” are not the losers

It’s time to think out carnival differently. We can decide not to integrate the carnival of Guadeloupe into the economy of the island, in this case, it is unnecessary to invest in its organization all these millions of euros. We can also decide to integrate carnival into the Guadeloupean economy and invest large sums. In this case, all parties must be around the table to share the “cake” in equal parts.

Those who do not want carnival to be part of the island’s economy – including some “skin groups” that promote nationalist political ideas – receive subsidies from local communities for their travels abroad, their concerts, their “déboulés”, their various festivities such as their anniversary etc; one of them even get a parcel of land from the Regional Council of Guadeloupe to build its new premises, this information was announced on the podium of the “Route du Rhum-Destination Guadeloupe”. Whatever they say, these “skin groups” are in the “system” and take full advantage of this “system”. These are only “postures”, masking positions that can be summed up by this Creole saying : “ou pa enmé mériken-la, mé ou enmé bisui ay” (you do not like the American, but you like his cookie), here it is the French…

They can also simply create two “currents” in the carnival of Guadeloupe : the one commercial and the other one non-commercial.

Today, the biggest losers in this business are the “snare drum groups”: they get a meager financial support often after carnival, they participate in several parades of the federations, their members are obliged to invest their own money to make their different costumes (now carnival is over, some say they are tired and they do not have 1 euro in their pocket!). Opposite, there are all the others who make money from carnival, there are even some media with the live television broadcast of the parades, commercials, photo magazines…

But, let us face the facts, “carnavaliers” are not taken in by what happens in the carnival of Guadeloupe: they let it go and integrate groups to satisfy their own needs, their well-being (to forget the unemployment so financial problems, meet people or even a husband or a wife, do sport, exist etc.).

To conclude, let us not lie to each other: large sums have been spent in carnival for years, but this financial investment brings nothing to the tourist economy in Guadeloupe. When our hotels will be filled with visitors who will come specially to admire our carnival, we will have won this battle. 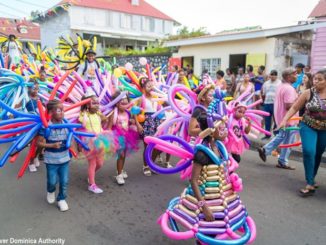