For about ten days, a new programme called “Ziktruck” – which will be broadcast on the channels 1ère and TV5 Monde – was shot in Guadeloupe. This is a singing competition reserved for the inhabitants of the French overseas territories, the originality is that artists performed in a container. On December 7, out of 120 candidates on the island, 12 will participate in the local final at L’Artchipel in Basse-Terre. The winner will represent Guadeloupe during the great final that will take place in France in 2019 with other winners from Martinique, Guyana, Réunion, New Caledonia and Polynesia. 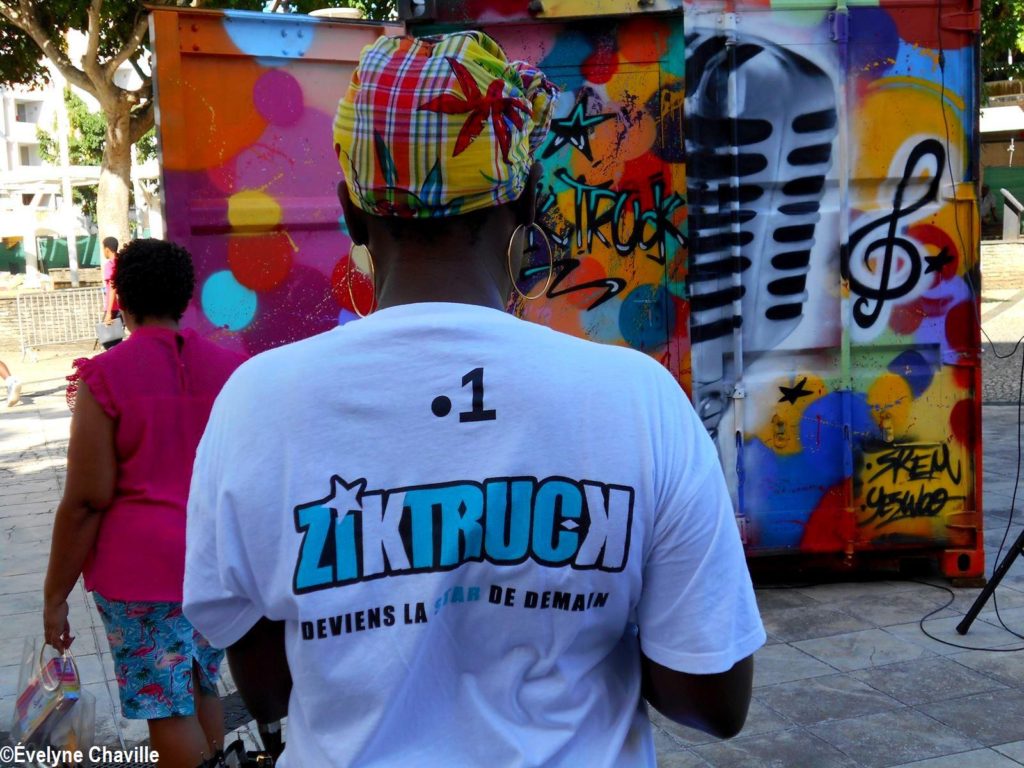 This Thursday, August 23 before 9:00 in the morning, there was a special atmosphere in front of the town hall of Pointe-à-Pitre. As if by magic, a nicely painted container by the street artists Yeswoo and Skem was put on the Place des Martyrs de la Liberté. A few people who were a bit puzzled were wondering what was going to happen, while others, obviously more informed, seemed to be waiting patiently. In fact, “Ziktruck” was there !

We already knew the singing competitions where candidates were on podiums or large television sets in buildings and in front of a big audience. With “Ziktruck”, whose slogan is “Become the star of tomorrow!”, the contestants come in a container equipped with cameras, microphones, tape recorders, etc. The pictures are broadcast live on a screen fixed on one of the outer walls of the container and two loudspeakers broadcast the sound so that the audience can see and above all listen to the performance of each candidate. Although it is narrow, the inside of this famous container in “Ziktruck” is arranged like a real television set and is air-conditioned. 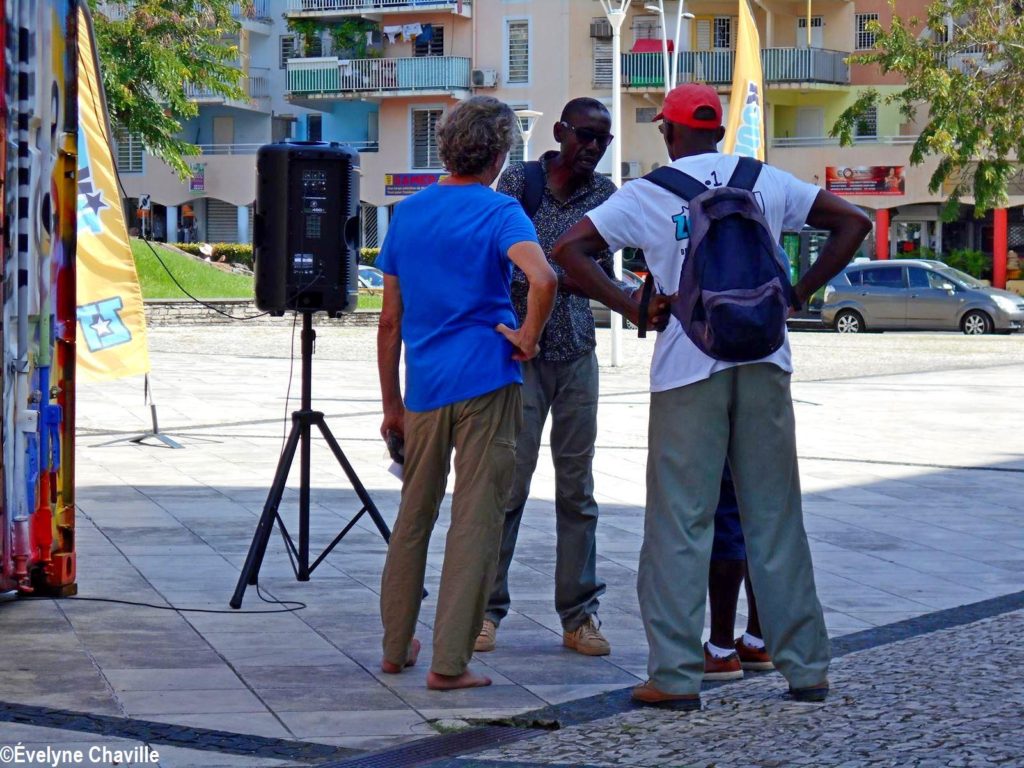 In Guadeloupe, the cultural association “La Compagnie des Mornes Bleus”, chaired by comedian and writer Érick Marset, is responsible for ensuring that the recruitment of candidates and the filming of the programme run smoothly. To do this, it has surrounded itself with professionals like Gérard Schmidt, a French director who lives in the United States for over twenty years, Daniel Symphorien, a general manager who is well known in Guadeloupe in the field of the casting for advertising, television and cinema films as well as Stanley London, a DJ in Great Britain whose mission is to coach the candidates.

In Guadeloupe, four cities and towns were chosen to host the container and the film crew composed of a dozen people namely Sainte-Anne, Les Abymes, Pointe-à-Pitre and Basse-Terre. Each time, the “Ziktruck” container was placed on the square in front of the town hall and stayed there two days to record the performance of the contestants who first registered on an application dedicated to this contest but there had last-minute applications; it was for example the case, in Pointe-à-Pitre, of this young woman who came with her husband and was determined to sing…

Fifteen candidates (mostly young people, even if the competition is for people aged 16 and over) participated a day so thirty during the two days of shooting in each city or town. 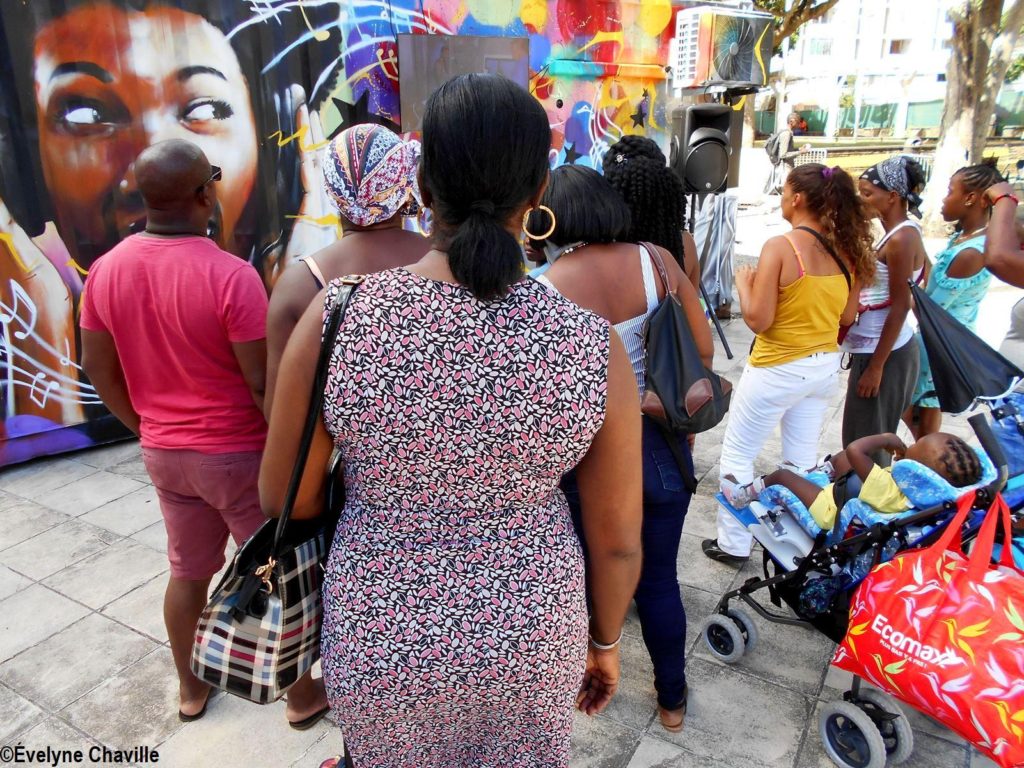 Many songs in English

On Tursday, August 23 and Friday, August 24 in Pointe-à-Pitre, when the candidates came into the container, they were received by the director, Gérard Schmidt and the coach, Stanley London. They first put them at ease and after technical tests that the audience could also see on the screen, the candidates sang. Most often, they were songs by famous artists like Rihanna, Phylissia Ross, but sometimes their own compositions.

From the first musical notes, the audience composed of family members, friends or onlookers rushed towards the screen to see the performance of the candidates and encourage them. Many candidates sang in English…

As for the host Jordan Rizzi, he collected the first impressions of the singers before their performance on the set and when they left the container. If they felt stressed before, after they were relieved and sometimes happy. In the four shooting locations on the island, the “ritual” was the same.

Many contestants said they “always liked to sing”, this song competition was quite “cool” and “nice” and the mini TV set inside the container seemed “less stressful”(…). For her part, a woman who was about sixty year spontaneously said to Érick Marset and Daniel Symphorien: “It is a very good thing to allow all these young people to express themselves (…)”. 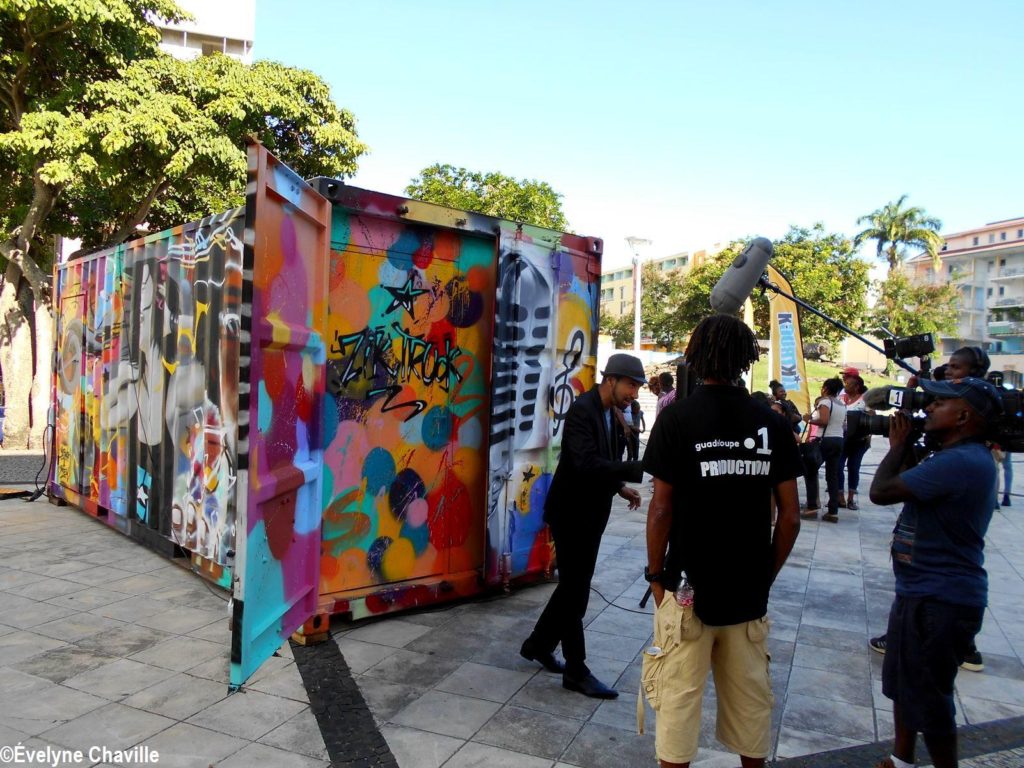 After Pointe-à-Pitre, “Ziktruck” made its last stop, from Sunday 26 to Monday 27 August, in front of the town hall of the county town of Guadeloupe, Basse-Terre.

At the moment, all the film crews in the other territories are registering the various participants in this original singing competition except Guyana which will start during the next few days because it is waiting for equipment from Guadeloupe. It should be noted that each territory has its own container which is the first “star” of the television programme. In Guadeloupe, several people expressed the wish to also

arrange a container for various functions… Unfortunately, we could not photograph the inside of the “Ziktruck” container, the organizers want to jealously protect their “invention”…

Between mid-October and mid-November, four 90-minute shows will be broadcast on the 1ère network and TV5 Monde. Viewers will have to choose their favorite candidate and three candidates will be selected in each city and town, ie twelve candidates for the four cities and towns in Guadeloupe (Sainte-Anne, Les Abymes, Pointe-à-Pitre and Basse-Terre).

On December 7, these twelve lucky candidates will compete on the stage of L’Artchipel in Basse-Terre, the singer who will be chosen will represent the island of Guadeloupe and will meet the winner from Martinique, Guyana, Réunion, New Caledonia and Polynesia at the great final that will be held in France in 2019.

The big winner of this first edition of “Ziktruck” will win 10,000 euros. 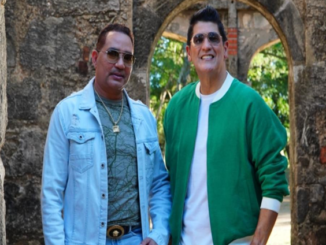