While waiting for the release of their first electroka album entitled “Abri cyclonique” (Cyclone shelters) in February 2023, the band offers two concerts to the Guadeloupean public on Saturday 23 and Sunday 24 July.

The story of Moïse Polobi is almost like a fairy tale. Here is a simple man from the Petit-Bourg countryside who has always sung his traditional compositions for his own pleasure and to express what life inspires him, who finds himself in an artists’ residency with renowned artists, in two concerts where he will have to perform in front of a crowd, on a video that retraces his daily occupations on his moped and in the woods, and above all, on an album produced by a major record company founded by a famous British singer…

We want to remind him of the Creole saying : “Sa ki la baw, dlo pa ka chayé-i” (literal translation: what is for you, water cannot carry it away). And as fate knows what it’s doing, the photo illustrating the press kit of this great artist who does not know it until now shows Moïse Polobi sitting on a rock in the middle of a river.

In any case, Moïse Polobi was not looking for fame, but in September 2020, during a break given by the Covid-19 pandemic, he went to perform some tracks of his very personal repertoire during a léwòz organized by one of his neighbors in Grande-Savane, Petit-Bourg. Outstanding musicians of the gwoka scene in Guadeloupe such as percussionist, bassist and singer Klod Kiavué, guitarist Christian Laviso and drummer Éric Danquin were present and they accompanied Polobi who went into a trance.

Valerie Malot who is a producer of musical projects (Les Amazones d’Afrique, Rokia Koné by Jacknife Lee…) was also present in the audience. Charmed, she tried to know better this man, he made her listen to tapes of another time on which he recorded his compositions, she left with tapes, she asked the three musicians and Polobi to record in studio some tracks then the producer and musician Doctor L put a sound dressing to it and this work was presented to Peter Gabriel who was seduced by the authenticity of the singer, the virtuosity of the musicians and the originality of the production.

The famous singer, multi-instrumentalist and ex-leader of the great Genesis band signed the project to his mythical Real World Records label (Youssou N’Dour, Papa Wemba, Nusrat Fateh Ali Khan) that he launched in 1989. Peter Gabriel also suggested that the band works with the view to presenting the live show under the 360-degree dome of the prestigious Womad (World of Music Arts and Dance) festival that has existed since 1982 in the United Kingdom. We assume that this big event in Europe will take place next year…

In addition, the director Louise Mootz was in charge of the visual dressing and she followed Polobi during her various activities on his moped but also in the mountains and the river.

From July 17 to 22, Polobi & The Gwo Ka Masters were in creative residence at the Centre Culturel du Moule. It should be noted that another member has joined the Kiavué-Daviso-Danquin trio : Najib Ben Bella, a Franco-Algerian DJ and producer.

Two restitution concerts have been announced for Saturday, July 23 at the Salle Robert Loyson in Le Moule and Sunday, July 24 at the Palais des Sports Laura Flessel in Petit-Bourg ; note that this second concert will be free. 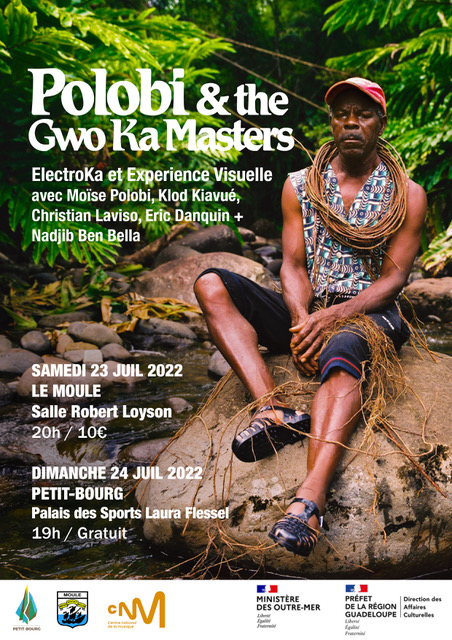 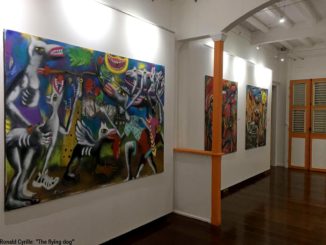 Ronald Cyrille: between residence and festival