From October 6 to 14, an exhibition of works by seventeen Dominican artists entitled “Waitikubuli Dreams and Visions” was held at the Centre Culturel Rémi Nainsouta in Pointe-à-Pitre (Guadeloupe). Despite the devastation caused by Hurricane Maria on their island last September, two of them had made the trip: the famous painter Earl Darius Etienne and a very talented young painter, Lowell Omtni Royer.

In July and August 2016, the exhibition called “Carré d’Art de Guadeloupe” with Ronald Cyrille, Daniel Dabriou, Diane Hugé and José Man Lius stopped at the Old Mill Cultural Centre in Dominica. Craig Stedman, export development officer at Dexia (an import-export company based in Roseau) liked this cultural event. So, he contacted the exibition curator and art critic, Nathalie Hainaut, to propose an exhibition of Dominican artists in Guadeloupe.

The exhibition project intitled “Waitikubuli Dreams and Visions” was launched, “Waitikubuli” meaning “Tall is her body” is the Kalinago name of the island of Dominica.

An exhibition thanks to the sponsorship of Dexia

“It is an exhibition that is entirely produced by a Dominican company, Dexia”, said, first of all, Nathalie Hainaut. She was in Roseau from September15 to 22 to meet the organizers and she will not soon forget her meeting with Cyclone Maria. On Saturday, September 16th, she organized the selection of artists to participate in this exhibition in Guadeloupe, the works which were not acepted would be exhibited at the Old Mill Cultural Center. On Sunday, September 17th, all the paintings had already been packed to take the boat to Guadeloupe but the shipping company canceled the departure. On Monday, September 18th, the inhabitants were ordered to remain confined. “I was at the painter Earl Darius Etienne’s house with his family in Jimmit. We experienced a night of horror, the wind screamed like a beast, we saw containers and roofs flying… We fought against elements all night long, in particular to move water out of the house. At 5:36 am, when we opened the door, the fruit trees in the garden had disappeared, it was a disaster. The painting entitled “September 19th, 5.36 am” is how Earl saw his garden after Hurricane Maria (…)”, she said.

A successful career as a painter in Dominica

In spite of the dramatic moment his island is experiencing, Earl D. Etienne wanted to honor Guadeloupe with his presence for this cultural event planned for several months. He knows Guadeloupe well because he has friends here – like the painter Joël Nankin – and, four years ago, he was a member of the Dominican delegation that participated in “Les Rencontres d’Art et d’Histoire” in Trois-Rivières, an event dedicated to the Amerindian heritage. “I am inspired by the Kalinago cultural heritage, I must say that my paternal grandmother was a Kalinago… The Caribbean and Africa are also my sources of inspiration”, he said.

During all the period of the exhibition at the Centre Culturel Rémi Nainsouta in Pointe-à-Pitre, the famous Dominican painter received the visitors and talked about his art. “In my opinion, I already painted in my mother’s womb. Before, I did figurative painting. I did many landscapes and portraits,for example. Now, I define myself as an environmentalist, my paintings are semi-abstract. I paint with acrylic but I also use coconut fibres as a brush and a material or smoke to have this black color that can be seen in one of my works in the room etc.” , he said.

During his 40-year-career, Earl D. Etienne exhibited his works in Dominica, in the Caribbean islands (Guadeloupe, Martinique, Antigua & Barbuda, St. Kitts & Nevis, Jamaica, St. Lucia, Barbados, Trinidad & Tobago…), in Europe (Great Britain, Switzerland, Austria…) and in the United States. “For ten years, I have been exhibiting in my house in Dominica. If you want to see my paintings, you have to come to Jimmit; at home, I have my studio and my showroom”, he said.

Earl Darius is 60-year-old, he is graduated from the Edna Manley College of the Visual and Performing Arts in Kingston, Jamaica, and has a very interesting career as an artist. Indeed, he was an art teacher in secondary school then, he was appointed Cultural Officer by the Government of Dominica, a position where for 25 years he gave lectures on art, he participated in cultural events and above all, he helped young artists of his island to organize their first exhibitions free of charge.

Earl D. Etienne as a role-model

Moreover, almost all the Dominican painters who exhibited at the Centre Culturel Rémi Nainsouta were young people, if some are self-taught, others studied art in the United States, England, Jamaica and even in China…

Among this new generation of artists from Dominica was Lowell Omtni Royer who is Earl’s nephew. At the age of 34, this very talented artist studied visual arts at the Edna Manley College in Kingston, like his uncle. “My uncle Earl is my role model, I would like to have the same great career and spend my entire life in Dominica like him. I believe that we must stay and work on the island to enhance it”, he said. After spending four years in Jamaica, Lowell returned to his island where he has been working as an artist for eight years and he runs the association DeviantArt. His favorite disciplines are painting, drawing and tattooing. “I like painting realistic portraits and nature; I like birds, when they are flying, they represent for me freedom… I also create works on wood. In two years, I would like to return to Guadeloupe to organize an exhibition of my paintings on wood”, said Lowell.

For his part, Mr. Craig Stedman was unfortunately not present at the opening due to a road accident.

However, by maintaining this exhibition in Guadeloupe despite the painful moments they are going through, the painters from Dominica wanted to show their determination to recover quickly and above all with dignity. 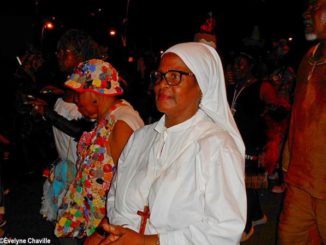 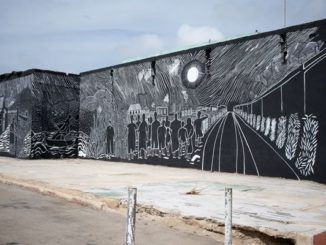