About twenty people came to the media library in Pointe-à-Pitre, this Friday, October 12 at 7:00 pm, to attend the presentation in Creole of “La Vie Scélérate” / “Tree of Life”, one of the many novels written by Maryse Condé. The organizer of this literary meeting was the writer Ogis Berthély also known as M’Bitako.

First, Ogis Berthély aka M’Bitako wanted to clarify the fact that this conference took place when the “alternative Nobel Prize for Literature” is awarded to the famous writer was just a coincidence.“An pa gadèd zafè / I’m not a clairvoyant. This date had already been chosen for a long time with the town council of Pointe-à-Pitre(…) I heard Maryse Condé on the radio, she said she was happy to win this prize. An ka respèkté sa / I respect that. I’m looking forward to the 2018 Nobel Prize for Literature”, said M’Bitako. Then, the author who considers himself a great lover and a strong supporter of the Creole language presented his various publications including “Ti-Jan & Dyab-la”, a translation into Creole of “Ti-Jean and his brothers” by Derek Walcott, “On Lyannaj pi Méyè”, a translation into Creole of the famous speech, “A More Perfect Union”, pronounced by Barack Obama on March 18, 2008 in Philadelphia, “Ti-Jan é Paren a-y”, “Nèg Mawon”, “Jan lavi ka bat kat a-y” etc. He also called other writers from Guadeloupe to write in Creole their own works or to translate into Creole foreign writers’ works. The moderator of this literary evening who spoke Creole too was Gabriel Mugerin (a teacher) and he paid tribute to the work undertaken by M’Bitako for years: “he makes us aware of the importance of the Creole language in Guadeloupe, he gives us teaching aids to write it – metalanguage – and shows us that we can do a work in Creole and present it in front of all the “great” languages. Perhaps Césaire is difficult to understand, but we can take a trip with Condé because of her way of writing“, he said.

“Sé on travay fondal (…) Chak fwa i ka ékri on liv, i ka baw klé-la pou rantré adan-y / This is a fundamental work (…) Every time, she gives you the key to go into the book she wrote (…) Maryse Condé wrote many books, there are books for children, for adults, novels, plays, etc”, M’Bitako added.

The writer began to tell the novel entitled “La Vie Scélérate” / “Tree of Life” (Ballantine, 1992 & The Women’s Press, 1994) published by Éditions Seghers in 1987 and for which the laureate of the “alternative Nobel Prize for Literature” had won the “Prix de l’Académie Française” in 1988. So, audience members who had not yet read the book or who did not remember the story heard about Albert, the patriarch, who left the hellish world of the sugar cane fields in Guadeloupe and went by boat to Martinique in order to go to dig the Panama Canal; over there, he saw many workers die, then he moved on to San Francisco to continue working. With his savings, he permanently returned to Guadeloupe, he had a store and housing he rented out, his one and only objective was to become rich. Jacob who took over his father’s business will be worse than him: “misyé la-sa pli mové ki on blan ! / this man is worse than a White man !”, people will say. Técla, Jacob’s daughter, who was brought up like a queen, went to France to study and, for several years, she will not send a letter to her family, she will collect lovers and will have a daughter “Coco” that she will give to a nurse to live her life in the United States, Jamaica with a rasta and other places etc. This child told this family saga from 1890 to 1970.

A novel rich in adventures

While he was summarizing the story of the book, M’Bitako gave his explanations to the audience : “It is the story of a family from Guadeloupe who goes to several places. It is like the story of many Guadeloupeans, it begins in a field of cane (…) Woes of Black people in sugar cane fields in Guadeloupe are like those of Black people in cotton fields in the United States (…) It was absolutely necessary to leave the cane, so a lot of people from the Caribbean islands, among them Guadeloupeans and Martinicans, went to dig the Panama Canal, a few years ago, their descendants came here to meet their families. We had forgotten this story, I remembered because I had read Maryse Condé’s book (…) In this novel, there are journeys and the four main characters go to the United States; there is capitalism to make money even if people die around us; there is racism because Albert is Black and he does not like White people (…); there is politics because it is about Marcus Garvey who really had the opportunity to go to Panama, Malcom X, Nat Turner, the time of Governor Sorin in Guadeloupe, communists, separatists (…); there is culture like our relationship with our dead when we take care of the graves (…)”.

The important thing is love

And finally, M’Bitako gave the lesson which, according to him, must be learnt from this story. “When I read Maryse Condé, I am in her book, our contradictions, our dreams and our vices are thoroughly in this book (…) We do many things without thinking and sometimes we know that something is not good but we do it anyway (…) Maryse Condé ka montré nou adan liv-la kè san lanmou nou pé pa fè ayen, nou bizwen lanmou kon pyé bwa bizwen dlo pou pousé / Maryse Condé shows us in this book that without love we cannot do anything, we need love like a tree needs water to grow”, he said.

The literary meeting continued after 9:00 pm in a friendly atmosphere with questions and comments from the audience about the book and her author followed by the answers of the organizer of this panel-discussion. M’Bitako said again his admiration for the writer Maryse Condé: “she belongs to us, we must read more her books, she is one of the greatest writers in the world. We should not wait for someone to be dead to pay tribute to him“.

The Guadeloupean author also said that this “Maryse Condé Cycle” will continue until October 2019 and, gradually, he will announce the books he will present. The new appointment was scheduled for October 26 in Sainte-Anne. 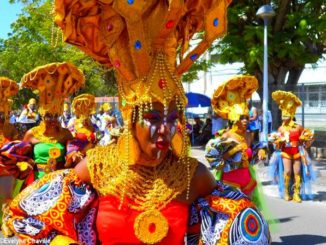 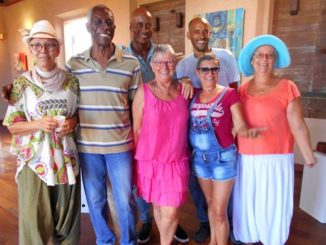