During carnival, it is impossible to escape the whip which represents a very important symbolic element of “skin groups”. The whip also became a toy for children during this period. Richelieu Chelza is a well known whip manufacturer in Guadeloupe, he founded “Fwèt Gwada” in 2012. We met him… 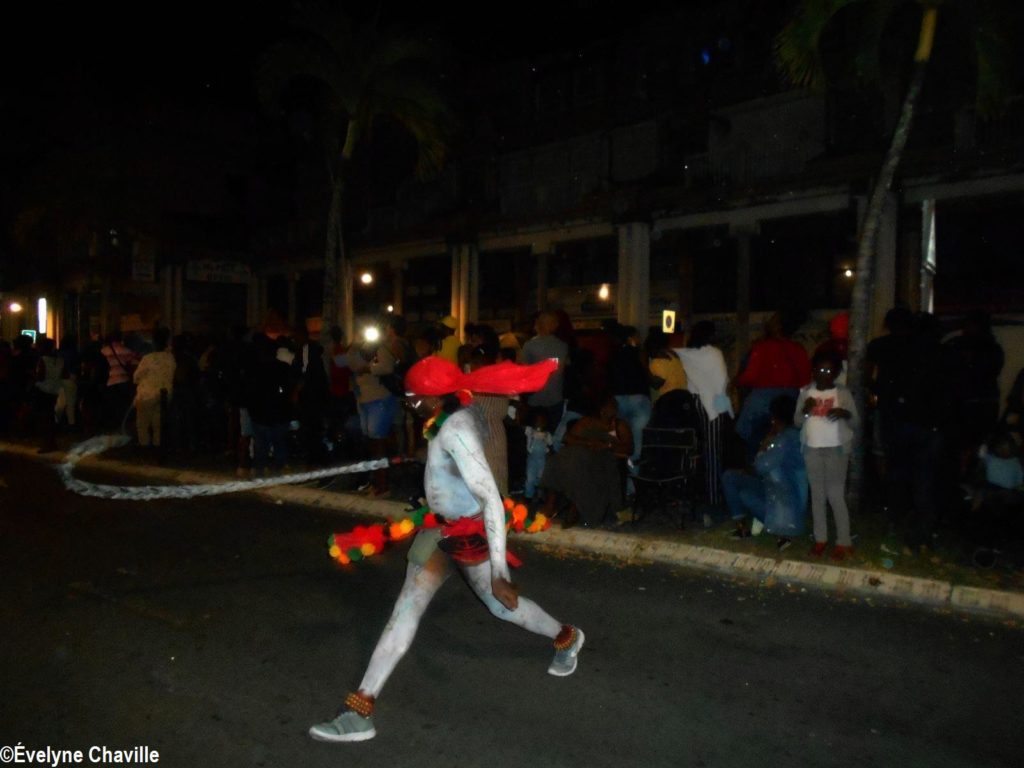 The whip! Some like it in carnival because it livens things up and it seems to have become a way for young men from “skin groups” to prove their manliness, they are booed by the crowd if they do not succeed in cracking it… Other people hate it, find it dangerous and wonder why did they revive the object of misfortune which was used to beat the African ancestors during slavery?

The fact is that the whip is used during “skin groups” parades to chase the “bad spirits” out (like incense) and to announce the arrival of the “Mas”. As soon as the carnival period opens, young people in the districts begin to resound their whips and, every weekend, those who belong to a carnival group parade in the streets. The whip also became a toy that parents buy for their children.

Richelieu Chelza lives in Pointe-à-Pitre and is a well-known whip maker in the world of carnival in Guadeloupe. On Saturday, February 9, he was at the “Village Experience Carnival” in Pointe-à-Pitre. From 9:00 am to 6:00 pm, his stand was invaded by children who wanted a whip during this carnival period as they want a ball during the Football World Cup… Most of the time, the parents could not resist and came with them to the “Fwèt Gwada” stand where, for 10 euros, they participated in the making of their whip…

The whip by accident

“My real job is machine driver but, one day, I broadcast an advertisement on the radio to sell a 30-metre long rope. People did not understand my message and several people phoned me because they thought I made whips so my daughter told me to try to make some”, said Richelieu Chelza who could not imagine that this additional activity he launched in 2012 would be a real success.

Richelieu explained to his clients-pupils, girls and boys, who were very good and disciplined, the various steps to make the whip with which they will go back home. The children were holding a piece of 1 meter long rope and looked at the “master” attentively, their eyes were sparkling as if they were in the presence of Santa Claus. Before, Richelieu had “mixed” the rope because he had removed one of the three “branches” or strands and replaced it with another thinner rope, for more strength, “but this step is not compulsory”, he said. The children did not forget to ask him questions and he gave them all the explanations. When we asked him if he was a “fouettard” (a young man who cracks his whip in the front of the “skin group” parade) when he was young, he answered with a smile: “When I was a boy, I was not a “fouettard” and today, I do not belong to any carnival group”. Then, the “master” showed his little pupils how to fix to the end of the rope the piece of wood that will serve as a handle; Richelieu came with sticks of various diameters for little hands. He separated each thread of the rope like a hairdresser who was making a bun then he put the stick in the middle. 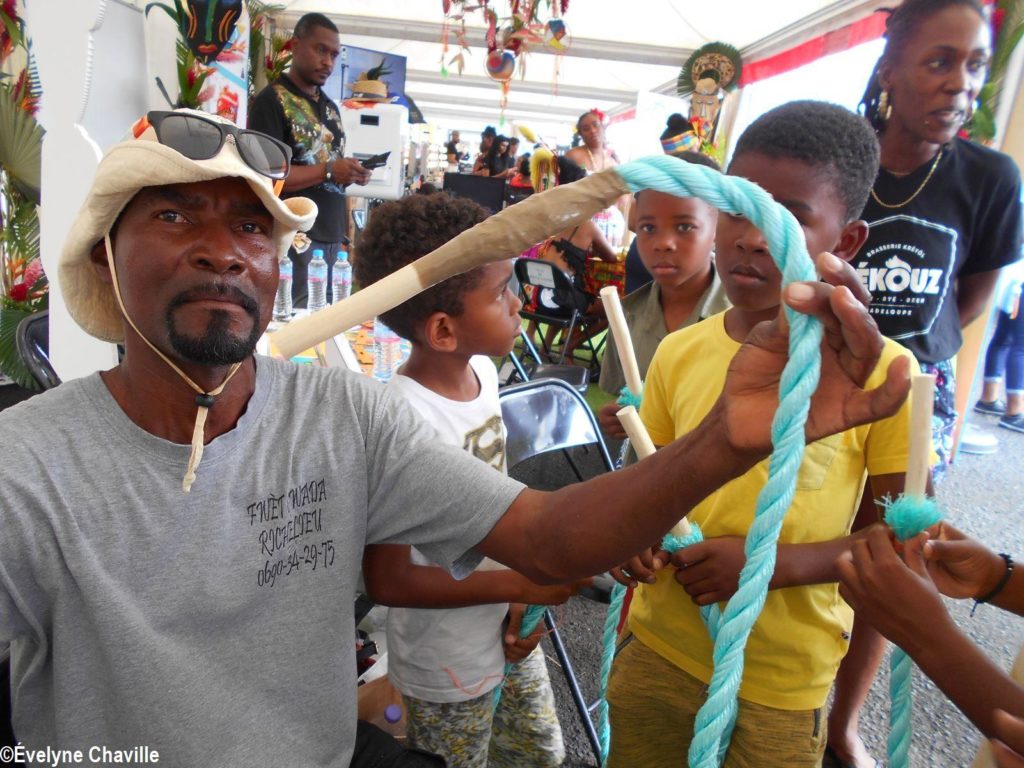 The children tried, as best they could, to do the same thing… Richelieu firmly tied a piece of string around the end of the “ruffled” rope and the handle. He started to do the same gesture again, this time, with adhesive tape and showed the result, with pride. He will repeat the same operation for all the children by continuing to answer their questions when they did not understand something. Sometimes, he was interrupted by other parents with their children who came to ask for the price of the whip.

To sum up, each whip has its price, it can reach 50 euros or more and it depends on the length and diameter of the rope. “There are simple ropes or thicker ropes used for mooring boats, for example“, he explained by showing us a whip made with a big brown rope and we imagined that we need a lot of strength in our arms to handle such an object… Like any professional, Richelieu Chelza exhibited on the table of his stand some models of whip he made and which were for sale.

Over the years, Richelieu has earned a solid reputation in the whip field, because he produces not only for kids who want to have fun, but also for members of carnival groups. “The “skin groups” make their own whips but when they are snowed with work, their members come to see me. My order book is full, at the moment, the phone does not stop ringing”, he said. 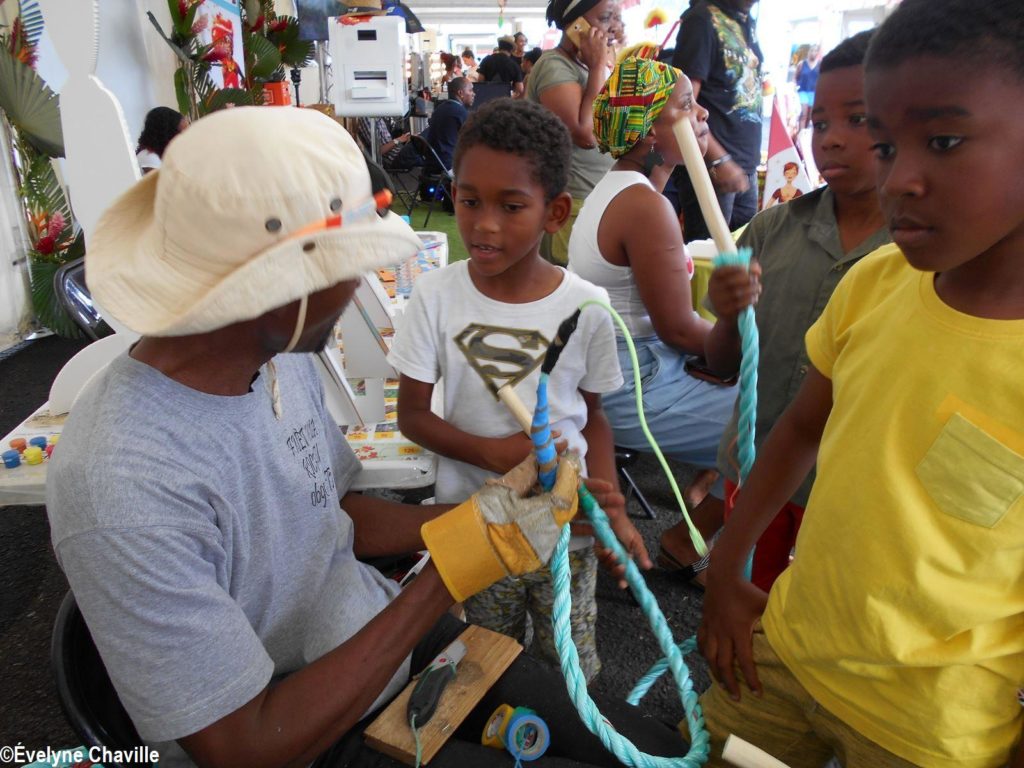 The “krash”, an important element

Then, Richelieu began an essential step in the realization of the whip, it is the “fixing” of the “krash” at the other end of the rope. “The “krash” is this cord that is fixed to the other end of the whip. We can also use the fibres of karata, a tree that grows here in Guadeloupe”, he explained. For this operation, he chose a piece of green cord that he also fixed with string and adhesive tape. After, he undid the “krash” on 2 centimetre long and showed us the inside part: “this white part is “the soul” of the rope. A good whip does not touch the ground. The noise we hear is caused by the moving speed of the whip in the air. There are people who put lead at the end of the whip so that it makes a blast“, he said.

We remember the death of this little boy who had received fragments of lead in his eye, a few years ago in Anse-Bertrand… Did this dangerous practice change? No one knows, but we may wonder each time the “fouettards” from “skin groups” are cracking their whips in the street in front of the spectators.

If, for once, the children waited calmly that their whip to be finished, some parents were very impatient… Thank goodness, Simone, Richelieu Chelza’s wife, was there to help him to please these little carnival lovers. 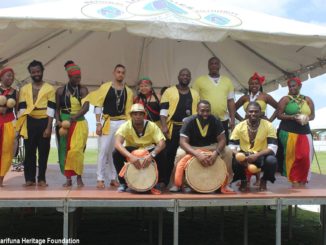 Saint Vincent and the Grenadines celebrate the Garifuna heritage