The 5th edition of the Stéphane Hessel Prize (Prix Stéphane Hessel de la Jeune Écriture Francophone), awarded by RFI and the Alliance Francophone, took place on Tuesday, May 9th, in the salons of the Senate in Paris. The sponsor of the literary event was Senator Michèle André, Chairwoman of the Financial Committee and former Secretary of State for Women’s Rights and Equal Opportunities.

Three young authors were rewarded for their short stories in French. The 1st Prize was given to the Lebanese Romy Batrouni (24-year-old) for her short story “La Ville Espoir” ; the 2nd Prize was awarded to the Cameroonian Michel Dongmo Evina (22-years-old) for “Naufragé du Destin” ; the Special Prize was for the Haitian Phew Laroc (25-years-old) for “Visages dans la Nuit”. Another young Haitian writer, Jian Buldad NELSON, also took part in the competition with his short story, entitled “Terre sans Espoir”.

This year, to write their short stories, the many participants from sub-Saharan Africa, the Maghreb, the Caribbean, the Indian Ocean and France had to be inspired on the theme of “Hope” after a quote from Stéphane Hessel : “A harmonious and happy humanity is not excluded. It is perhaps not probable, but improbable is sometimes true”.

Created in 2013 by RFI and Alliance Francophone, this literary prize helps young Francophones aged 15 to 25 years to show their writing talent and to promote the French language throughout the world. The award was named after its first sponsor, Stéphane Hessel. 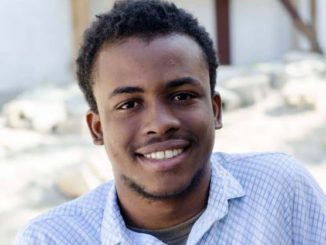 Ducarmel Alcius : “Opening oneself is also to have the possibility of forming other cultures”