As the large carnival gatherings have been cancelled in Guadeloupe this year, from January 19 to February 18, the Kolèktif Mas Kiltirèl (KMK) presents at the Emmanuel Albon Cultural Centre, in Raizet (Les Abymes) the exhibition “Mès-Labitud-Fondal” composed of several hundred objects (drums, costumes, masks, whips, explanatory notes, brochures, photos, household utensils etc.) provided by a dozen Gwoup a Po (skin groups) and other cultural actors. As this exhibition is not open to the public because of Covid-19, Kariculture visited it for you and offers you a large number of photos so that you can enjoy it as well as the interview with Alain Mozar (secretary of the KMK).

Alain Mozar : Generally speaking, every year, between September and October, the KMK is in the phase of stocktaking, reflection and preparation of things and, in this process, we made the observation that we talk about “Mas a Po” but quite a lot of clarification, consultation, sharing are missing. So, first of all, we had to say who we are? what do we do?

We see above all the dimension of the “déboulé” but it is not only the “déboulé” because most of the groups say that they are “cultural movements”, so they work all year round and that, in the 32 municipalities of Guadeloupe, especially in rural areas, these groups have a function of social link, of meeting, of discovering the environment, of valuing of elders, ancestors and quite a few other things.We had to be able to explain that as we went along. On this basis, we set up the 2021 programme.

Kariculture.net : So the exhibition was planned Covid or not Covid?

Kariculture.net : Can you explain this year’s theme?

A. M. : In the theme “Mès- Labitud-Fondal”, there are 2 axes. The idea is that the “Mas a po” draw their messages, everything they want to do during carnival from our environment, from our questioning, from what works and what doesn’t work, this is the “Mès é Labitid” part of the country. “Fondal” – what is essential for us, the line we follow and every group has its line – is how the groups transmit the thing.

Kariculture.net : How many groups or people participated in this exhibition?

A. M. : We have 23 groups in the KMK. In Guadeloupe, there are 70 groups but only about thirty of them are really practising.

When we say Mès è Labitid, we have craftsmen, associations which are not Mas associations, people who brought things ; for example Mr. Maurice Noël from Pointe-à-Pitre who works permanently on the history and heritage of Pointe-à-Pitre and Mrs. Ladine who has the association “J’ose la Nature” brought objects from everyday life. We are waiting for the KBM group (Kaw ka Bwè é Manjé), it is something fundamental about what we produce, what we eat. There are also groups of Mas, people who act around the cultural issue who made their contribution. It’s rather broad, there are certainly the Mas, but the Mas are in society, it’s daily life.

Kariculture.net : How many pieces make up the exhibition?

A. M. : The number of photos proposed by the KMK is 70. There are many pieces, several hundred… 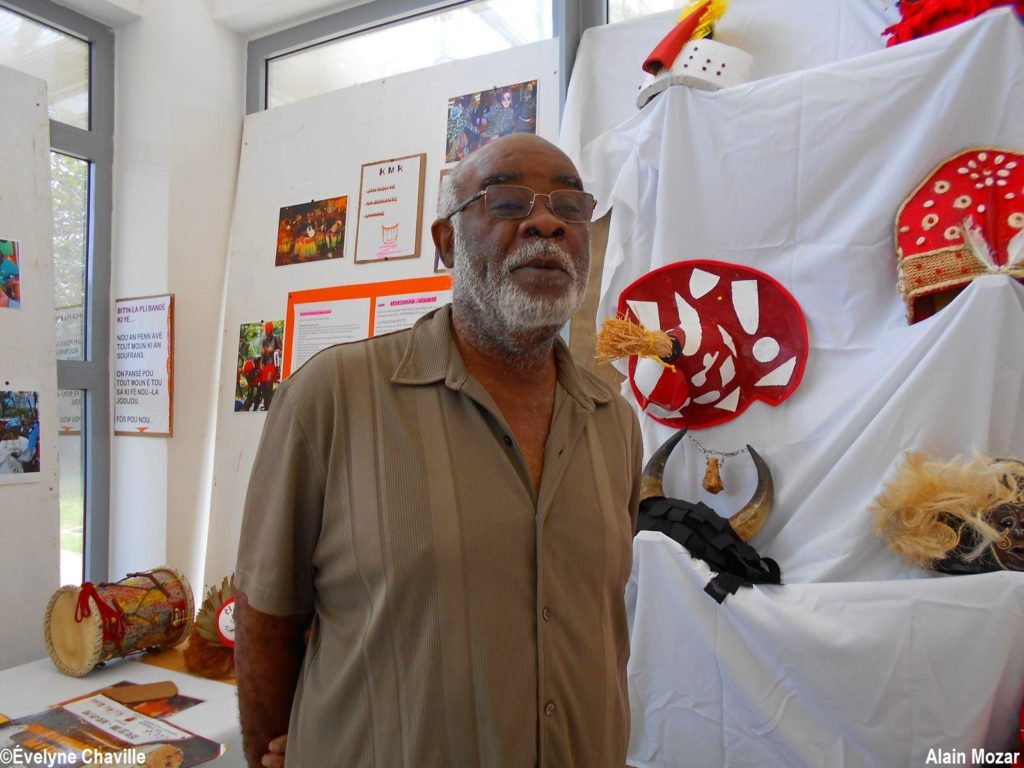 Kariculture.net : Was it easy for the groups to bring objects?

A. M.: We couldn’t host the 23 KMK groups. Here we have 9 to 12 groups, 12 is the maximum number we evaluated according to the space and the theme. I can say that we succeeded, but in advance there was a whole scheme where we had to see the logic and so on.

Kariculture.net : In the end, you didn’t have much time to build up this exhibition?

A. M. : We are used to it. It’s also an exhibition that was done first on paper, everything was thought out in advance, and then you can arrange it.

Kariculture.net : The exhibition started on January 19, it ends on February 18, that’s exactly one month. Is it long enough?

A. M. : It was important for us to mark the carnival period and to remember that the particularity of the carnival of Guadeloupe is also its duration, which goes from January 1 to Ash Wednesday. Perhaps we will extend it to Mid-Lent because there are other groups, especially in the Basse-Terre region, that hold events until that date.

Kariculture.net : It’s a pity, the public cannot visit the exhibition when it would deserve to be seen, if only by a small number of people. What does the KWK think?

A. M. : For the moment, we are remain in this logic : there is no public. It is on this basis the cultural centre lent us the space. In France and Guadeloupe, cultural spaces are not open to the public (…) The Mas are in the logic of permanent adaptation and when we saw that this was the case, we moved much more towards the media and we thank them for the coverage. I think that more people saw the exhibition and talked about it than if it was open to the public (…)

Kariculture.net : No one knows if there will be a carnival again in 2022, how does the KMK see the future? Are you optimistic?

A. M. : We are optimistic about life. When we look at the journey we made since 2004 and the journey the groups made since 1970, we evolved, progressed in a certain direction, we also see areas for improvement. The important thing is to be able to adapt. There is great suffering in the country, there are people who would like to express themselves (…)

Kariculture.net : Have you heard from people who suffer because they can’t enjoy carnival which is an outlet for them?

A. M. : Oh yes! It’s an outlet and much more. I will draw a parallel with death : in the region of Pointe-à-Pitre, there are people who eat at funeral wakes, they can’t have a meal. Every Sunday by solidarity, the Mas received everyone, from January to March, and there were people who, on this occasion, had a good meal in the groups, met people, were among the others. This is not theory about social ties, it is real “doing together”. 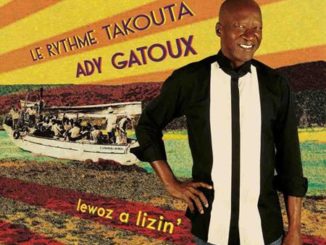 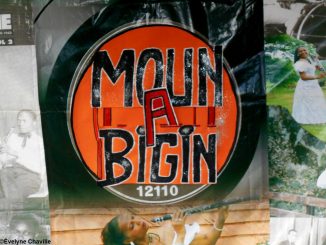 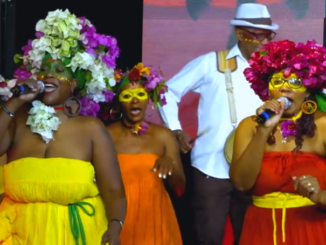