From August 2 to 16, this 18-year-old artist who lives in the city of Les Abymes exhibited her works on the ground floor of the Pavillon de la Ville located near the Place de la Victoire in Pointe-à-Pitre. Her second exhibition focused on emotion.

27 works painted mainly in 2018 and 2019 (except one in 2017 and another one 2016) composed the exhibition titled “Émotionnellement vôtre” by Célia Quellery-Selbonne. We saw representational art with landscapes or faces of characters but also abstract art often in very bright colours. “I do not have a particular style, I try to be non-conformist, visual arts are very large but I would like that as soon as people see one of my paintings they recognize me”, said the girl. “When I paint, I ask my family circle what it thinks, what it feels and I realized that through my paintings, first I was looking for emotion”, she said, about the choice of the title of the exhibition and works.

On the evening of the private view, there were nearly 200 people at the Pavillon de la Ville, the well-known Guadeloupean visual artist Jacques Gilles that Kariculture.net has already had the opportunity to introduce you

had agreed to be the sponsor of the exhibition “Émotionnellement vôtre”. During these two weeks, more than one hundred visitors (locals and tourists) came to see the work by the young artist who was not afraid to face criticism : “I am a confident person. Some people appreciated my work and shared their feelings with me. Some artists gave me “technical” advice, I’ve just started so I still have a lot to learn and I’ll do my best”, she said.

This was not the first time the young artist showed her work to the audience. Indeed, in 2015 Célia Quellery-Selbonne was only 14 years old and she decided to organize at the Centre Culturel Rémy Nainsouta in Pointe-à-Pitre her first exhibition, entitled “My First Imagination” (like a song that she had written and sang with her younger brother at the time) and composed of about twenty paintings. She had chosen as sponsor for her introduction to the artistic world, another well-known Guadeloupean artist, Antoine Nabajoth, in whose studio she had been taking classes for several years.

Very comfortable, she had achieved a real feat by selling all her works : “the buyers were art lovers, members of my family, friends, political representatives…a very varied public. I was only there on Wednesday and Friday afternoon because I had to go to school. I did not feel stressed because I usually prepare myself mentally, my only apprehension was: “will people like it?” but they were very participative, they gave me their impressions on the exhibition, if they did not like something, they told me why. They were also surprised because of my young age”, remembered the young artist.

Today, her mother is an important link in this success because she always encourages her, she is in charge of media relations and she receives the visitors when Celia is not there…

These two exhibitions are only “the result” of an artistic work started by the girl since her childhood : “my parents told me that when I was 14 months old, I painted a “fresco”; my father took this drawing to make a greetings card in 2003 (and Célia shows us this famous card which represents her first work). When I was 4, they also caught me while drawing on the wall of my room in the middle of the night, of course they reprimanded me and later, when I was 6, they decided to register me at the painting workshop organized by Antoine Nabajoth”, she said.

Maybe the young girl inherited the love for pictorial art from her grandfather on her mother’s side : “he painted for pleasure landscapes, bird etc.”, she said. For her part, her grandmother is certainly one of her greatest fans because she keeps carefully all her creations made since her childhood.

Célia Quellery-Selbonne, who obtained the S-series baccalauréat qualification this year, will be registered at the Medecine Faculty in Fouillole, Guadeloupe, in September 2019, but she does not intend to give up her passion. “I’m going to set up times where I can continue to paint. When I was in final year, I produced a lot in spite of the exams (…) I’m trying to involve people in art, everyone has an artistic side to discover, that’s why I want my exhibitions to be open to everyone, the imagination must burst out“, the young artist said. 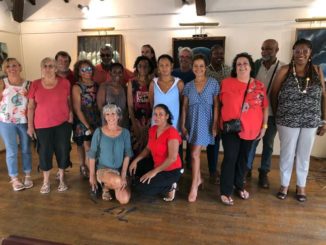 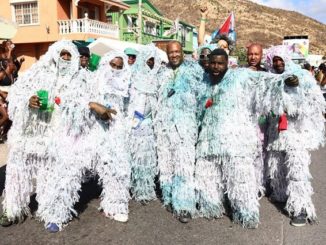 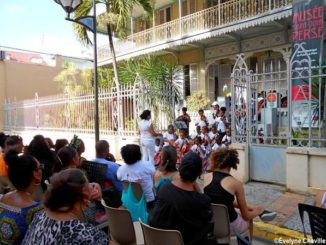