From April 15th to 18th, 2015 was held in Guadeloupe the 4th “Congress of Caribbean Writers” in the presence of fifty authors from 14 Caribbean islands and 5 Latin American countries. An opportunity to highlight the literary wealth but also the linguistic richness of our region,, which should be organized again in 2017.

Supported by the Regional Council of Guadeloupe since its creation in 2008, the  “Congress of Caribbean Writers” is a showcase of the literary production in our region. “This biennial meeting is an opportunity to place literature as a collection of our Guadeloupean history but also to open our doors to the world and to question our Caribbean culture (…) We have placed the book in the heart of the cultural initiatives of the Regional Council. Recently, this commitment has led us to republish and to distribute the Guadeloupean classical works with Aube Publishing (Éditions de l’Aube) : a collection of novels, poems and best texts, major witnesses of the time and the history of the island”, declared the former team in the Regional Council of Guadeloupe.

For ce moment, we do not know if the new president of the Regional Authority – Harry Chalus – and his councillors who have been elected in December, 2015, will perpetuate this biennial event.

In April 2015, during four days, about fifty authors from 14 Caribbean islands and 5 Latin American countries gave his points of view about problems related to the theme of “travels, migrations and diaspora in the Caribbean literatures”.

Earl Lovelace, president of the Association of Caribbean Writers since 2014, saw in this 4th edition of the congress a moment “rich in promises of literary journeys” which also marks a turning point in the life of this young association “intended to spread more its wings to explore better the variety of Caribbean writings”. Aged 81, this famous writer native of Trinidad, who is known for his ability to depict  the Caribbean society and who collects literary prizes, is an optimistic man.“The linguistic plurality that characterizes our geographical region is considered, often wrongly, as a barrier to exchanges, to cooperation. In fact, it is an extraordinary wealth for our populations because it is an intellectual passport which make easier the conquest of the world ( …) Our works, our words, our declamations, our musical expressions reflect the depth of our souls and probe the intelligence of our hearts. And that, even if we are rooted in the Caribbean arc, inside or on the coast of the American continent or settled elsewhere in the world (…) “, he declares.

Moreover, since its creation, it was the first time that the congress received as guest of honor a Creole-speaking and French-speaking author. Indeed, the poet, novelist and essayist, prize-winner of the “Prix Maurice Genevoix” from the Académie Française in 2003 for “Toi, c’est l’Enfance”, Daniel Maximin whose last book is titled “Aimé Césaire, Frère Volcan” (Seuil Publishing) performed that function.

In addition to the plenary sessions and workshops at the very beginning in the evening, the authors read parts of their works to the audience. Book signings were organized. The literary production was highlighted in a bookstore realized by the ka drummer and manufacturer Yves Thôle and the painter Michelle Chomereau-Lamothe.

The writers and congress participants also went and met high school and university students to talk about the themes they studied in class. This initiative was a great success. Finally, they visited the “Caribbean Centre of Expressions and Memory of the Slave Trade and Slavery”, the Memorial ACTe. 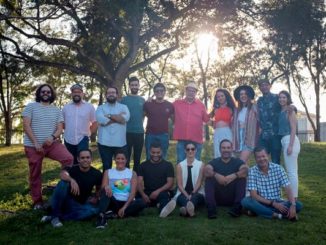 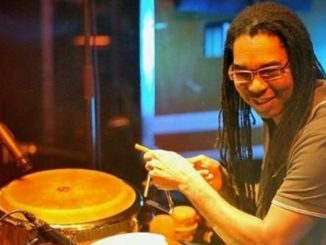