The story of the life of this key figure of Guadeloupean culture is told in the 120 pages of this book which has just been published by MJCA. “Misyé, Mizik, Mas, Larel Senjan” was presented during a literary café organized by the Maison des Jeunes et de la Culture des Abymes to a very interested audience.

Many people came on Saturday, March 19, the eve of Mid-Lent, traditionally celebrated in Guadeloupe by a carnival parade in red and black (a particular feature in the Caribbean that did not take place this year because of the increase in cases of Covid-19), to attend the presentation of the book “Misyé, Mizik, Mas, Larel Senjan” by Alain Mozar, published by the Maison des Jeunes et de la Culture des Abymes (MJCA).

Richard, Fabien and Rony Javois, respectively president, director and animator of the structure, explained the spirit of the institution, its course and some of its achievements.

As for the well-known sociologist Franck Garain, he was chosen to act as moderator for this first literary café of the year 2022 at the MJC of Les Abymes. The “MJCA spirit” therefore prevailed for three hours during which this collective work was shared with the large audience marked by signs of intergenerational and intercultural.

To begin this meeting, it was important to affirm that this figure – whom everyone talks about especially during carnival in Guadeloupe and the Mas a Po parades – really existed. For Alain Mozar, 53 years after his death, it was necessary to recall that this man is not only a concept when we speak today of “Mas a Senjan” or “Mizik a Senjan”.

Victor-Emmanuel Bernardin-Germain nicknamed Senjan (Saint-Jean, in French) was born on July 20, 1910 in Les Abymes and died on August 10, 1969. He is buried in the Maxo family grave in the cemetery of the same city.

This fascinating story, the author tells us about it throughout the 120 pages of the book, which have been grouped into 13 chapters and about sixty sub-chapters in order to allow a better understanding and a better reading.

Alain Mozar, specifies that the idea of writing this book was born in 2017 when the MJCA had created a workshop around the memory of Senjan (Mémwa Senjan) which gave rise to several achievements as commemorations in 2018 and 2019 as part of the carnival event “Doubout pou on gwan vidé” in Les Abymes. It should be noted that Alain Mozar has been collaborating for many years with the MJC of the city of Les Abymes.

Moreover, for the author who is a fine connoisseur of the Mas, the evolution of the MJCA and the evolution of this actor of the cultural life that was Senjan are closely linked : “Some will say that it’s just a meeting of Les Abymes people. But when you look at it, it’s a bit more than that. The MJCA, which began in 1967, and Senjan have a similar path. And that, from the viewpoint of observing their environment, initiative-taking, solidarity and popular practices and in the inscription in time of facts which give meaning to the common, to the collective action”, he said.

Even if Alain Mozar remains modest, this book is the result of a titanic research work in the municipal libraries of the Pointe-à-Pitre and Les Abymes agglomeration, the Caribbean media library “Bettino Lara” in Basse-Terre, the Departmental Archives of Guadeloupe in Gourbeyre – places of knowledge where he went several times. It is also the result of a large collection of testimonies from people who knew Senjan or saw him during parades in the streets etc. These contributors who actively participated in the production of this book with the author “are many, we will not be able to present them all here. There are his parents, relatives, observers, analysts, companions and correctors. But also the associations KMK and MADES, long-time partners. They are all mentioned on page 115 of the book. We thank them all”, said Alain Mozar who confessed that he worked hard on the book during the lockdown period due to the Covid-19 pandemic (from March to June 2020).

Among this mass of information gathered from contributors, there were assertions, revelations, questions and there are still points to be clarified concerning Senjan, however, a portrait of the man and his activities could be developped. Indeed, Senjan was first a great reveller. “As a child, like many others, he was a “Mas” in the neighborhoods and streets of Les Abymes. As a teenager and adult, he was a “Mas” with his parents (Mas a Ahoua, Mas a Labrassières, Mas Bitasyon). As an adult, he was a Mas (Mas a Mokafa), before and after his serious traffic accident. We noted that he practiced music by playing instruments such as saxophone, accordion, traditional drum (tanbou). He went to the léwòz, especially in the Grands-Fonds region”, the author told.

A cultural, economic and social actor

According to Alain Mozar, Senjan was also an “actor in the popular education field, an actor in the economic and socio-economic field, a companion, a middleman, an actor in society. He was an actor in the social and solidarity economy. He was a man of character, even a commander. He was the first signalman for the races of the cycling committee in 1948. A few years later, he had this traffic accident, he was on a motorcycle, which cost him a leg. A few years later, when he was a one-legged man, he continued his professional and volunteer activities. Over the years he became the attraction of cycling races and the group Mas a Mokafa, which became Mas a Senjan. Here and there, we are told of his prowess on the bike : at the same time animator, dancer, acrobat. In short, he was active, generous, friendly, bon vivant and committed. He left us the memory that physical disability can be overcome”, explained Alain Mozar.

Those who knew carnival in Senjan’s time have fond memories of it. His heirs, the “Mas a po”, have become an essential component of the Guadeloupean carnival and represent thousands of people. For the author, it is “a Guadeloupean popular practice that is not the result of the dominant culture. A creation, a breakthrough, an affirmation, an inscription in our collective consciousness. The “Mas a Po” were not taught to us in school (…)”.

But the success of this way of living carnival was not automatic : “This positive evolution of the Mas a Po could be structured around three stages, which are : the first, before the 1980s, in the context of the time, being Mas was not popular to do so. The Mas was somewhat marginalized : biten a vyé neg* (…) ; the second, after 1980, the Mas are considered revolutionary, rebellious, independentist, but with a different view of our realities and our environment, with a certain sense of affirmation ; the third, the current, the Mas a Po are in a process and in a memorial, cultural, conscious movement, in lyannaj for the other way. They shake up the established order, they disturb (…)”, explained Alain Mozar who is also a member of the Kolèktif Mas Kiltirèl (KMK), the association that federates almost all of the “skin groups” in the archipelago.

Those who knew this period of the Guadeloupean carnival saw again images that they shared with the other participants in this literary café. First, Senjan leading a group of about twenty members preceding Turenne with a whip that was craking, musicians playing very good music where the drum covered with a goat skin (hence the expression “skin group”) is king, actors and actresses who performed street scenes from life in the countryside and popular activities such as the “grajé manniok” (cassava “grater”), “koupè kann” (cane cutter) or from city life such as the “balayè lari” (street sweeper). The crowd made up of followers and supporters including many children was large.

This post-war popular carnival was different from the official carnival presented by two other cultural actors : Aimée Adeline and Raymond Giraud.

A future stele in Les Abymes

Some of these elements remain such as the music called “Senjan”, the ben démaré (started bath) taken on January 1st by some revellers, mythical places in Pointe-à-Pitre like Fonds Laugier, songs, group life, social life…

Alain Mozar and the MJCA intend to continue their research on Senjan’s companions, Turenne Ambrosio, Léon Bourgarel and all the others, and they already invite all those who have information and documents to contribute. They are also thinking about a better conservation of documents and objects, and a more adapted transmission to the different audiences, including young people and schoolchildren.

A stele will soon be inaugurated in memory of these different figures of the Guadeloupean cultural heritage.

Many young people came to discover the life of this man whom revellers of the “gwoup a po” (skin groups) venerate. One of these groups – 50/50 – was invited to play this Senjan music that has gone through decades and is now part of the cultural heritage of Guadeloupe.

“We hope to have made our contribution to the “Mas a Po” and “Mouvman Kiltirèl”, to our popular arts and traditions, to continuing education and education for all and more specifically to culture and more globally to our country. “Misyé, Mizik, Mas, Larel Senjan”, a collective work”, concluded Alain Mozar.

*Something for bad niggers 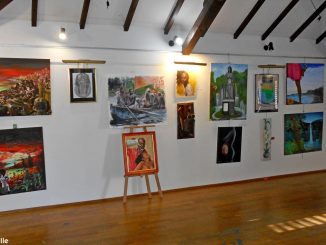 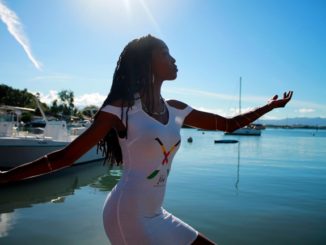 Nashoo: a discreet and ambitious artist