From December 11 to 23, 2017, the Louis Beauperthuy room at the Centre Culturel Rémi Nainsouta hosted the exhibition of photographs entitled “L’Insolite à Pointe-à-Pitre” by Geneviève Richard. The amateur photographer invited visitors to follow her in the streets of the city to show them things that often they did not see. 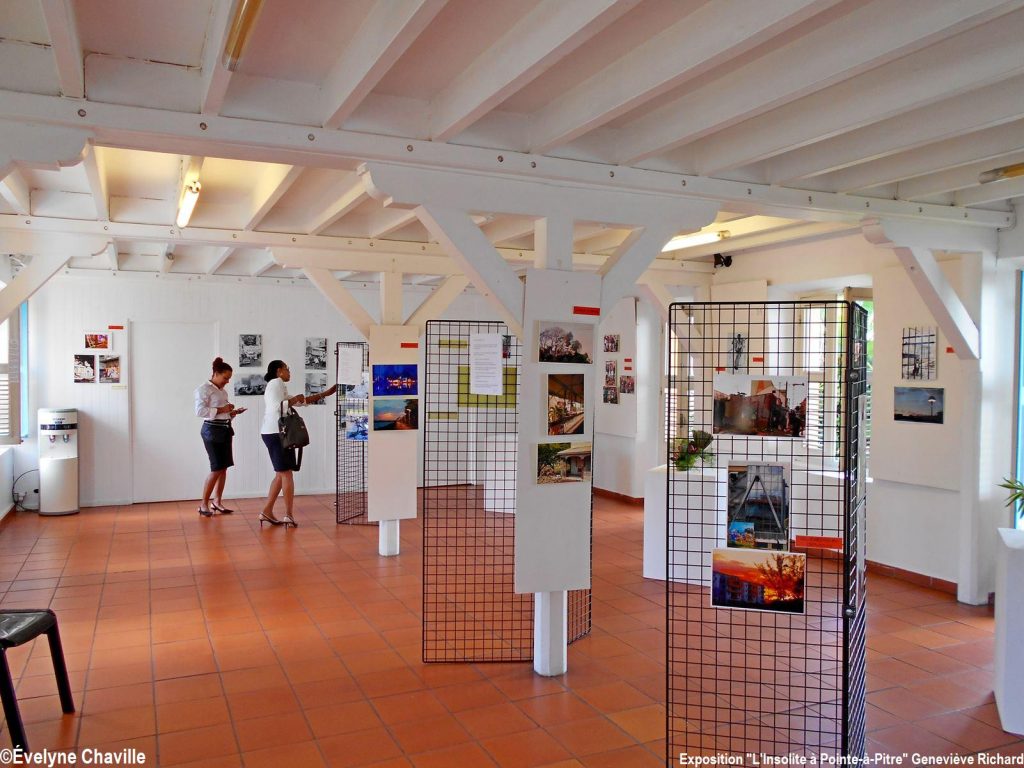 Contrary to what believe some people who saw her photos, Geneviève Richard is not a professional photographer. She teaches life and earth sciences in a high school in the city of Les Abymes, but she always was around the art of photography. “I discovered photography as a child. At home, there was a photo lab that belonged to my uncle, so I always saw pictures. I kept this passion when I became an adult but I never thought of choosing it as a profession. At that time, in Guadeloupe, was it really a profession? So I continued my studies but I never forgot photography”, she said.

A few years ago, in order to better master photography, Geneviève Richard decided to take courses at the Centre des Métiers d’Art in the Bergevin district of Pointe-à-Pitre for three long years with three hours of class every Saturday morning. There, she learned, among other things, shooting, focus, composition, lighting, framing, contrast, sharpness, in short, all techniques to become a well-trained photographer. “Even though I had always seen photographs, I did not want to just push a button, it was essential for me to do a training course. I listened well to advice, I watched the training films, video tutorials on YouTube”, she said. In addition, Geneviève Richard who has a real passion for photo exhibits visited several of them, in particular during her travels in Paris, Montpellier, Amsterdam and Luxembourg. 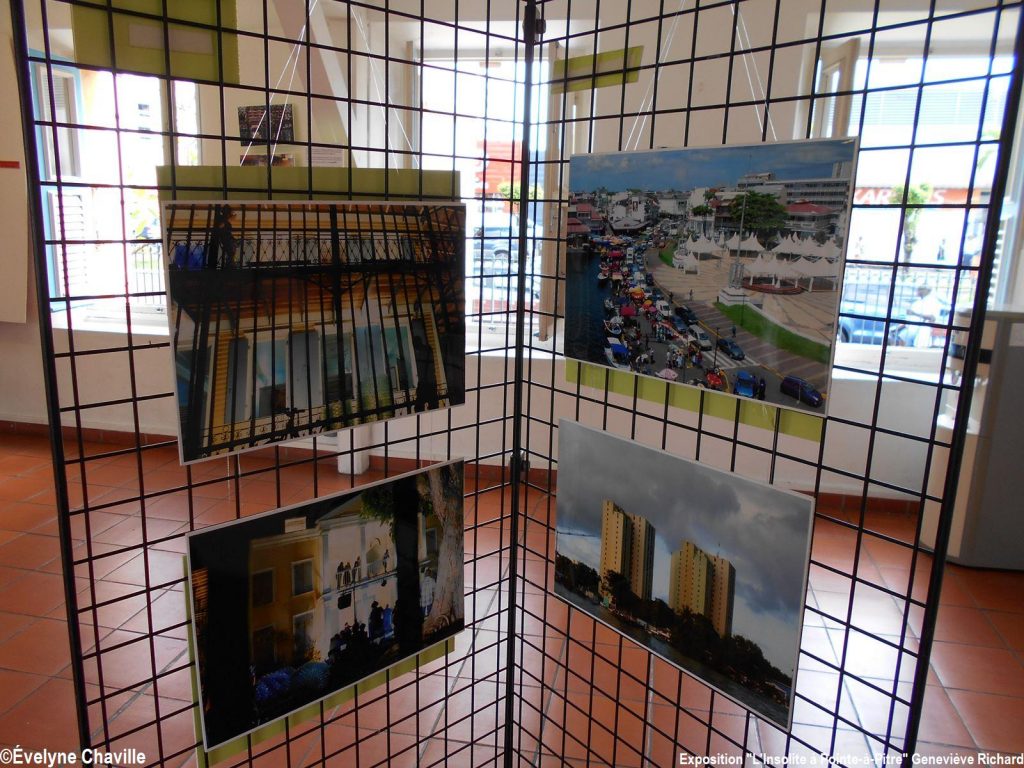 The importance of light

Indeed, in the capital of the Netherlands she understood the importance of light because, according to time of day, the lights which are reflected in the numerous canals change the color of the buildings that become red, yellow for example ; it was a French professional photographer who exhibited there who pointed it out to her, four years ago…

The exhibition entitled “L’Insolite à Pointe-à-Pitre” (The Unusual in Pointe-à-Pitre) which was held from December 11 to 23 at the Louis Beauperthuy room of the Centre Culturel Rémi Nainsouta is the result of a long period of work even if it was not originally planned by the amateur photographer. “The municipaliy of Pointe-à-Pitre offered me to do this exhibition but I felt not quite ready to show my work to the public, each time I delayed the date. One day, I had to decide and a date was set. I got help for the posters but the exhibition was done with my own funds”, explained Geneviève Richard.

From this moment, the photographer began to select pictures from all those she had already taken for the past several years. She also continued to walk around the city of Pointe-à-Pitre armed with her camera to find the most surprising things, characters and scenes. “I grew up in the town of Petit-Bourg and, many years ago, I came to live in my mother’s house in Pointe-à-Pitre, I had to stay there for only six months and I’m still there”, she said.

One of her favorite moments to walk the streets is at nightfall, around 5:00 and 6:00 pm. “Despite what we hear about insecurity in Pointe-à-Pitre, I was not afraid. Sometimes, I was accompanied. I was very careful. Some people agreed to be photographed but sometimes, I was rejected”, she recalled. And she continued : “I appreciate the coupling of old architecture and Ali Tur’s buildings. The white-painted concrete reflects the light, so the city is lit naturally”. 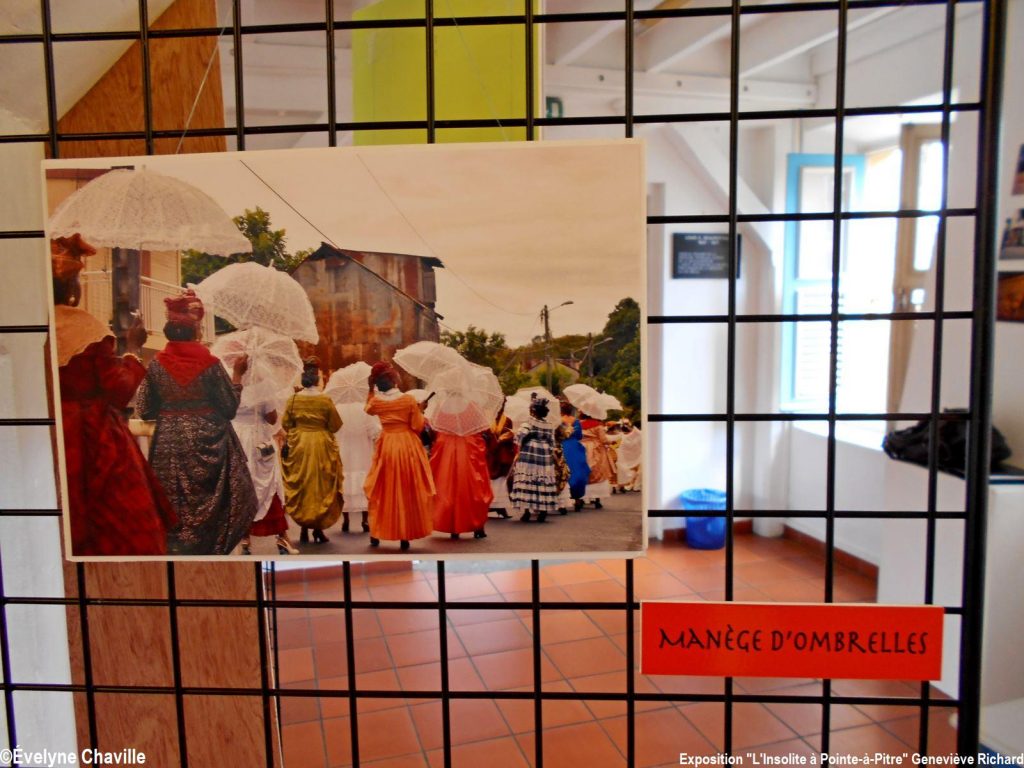 To see for the others

In this exhibition on the unusual, the visitor saw, among other things, fishermen in their yellow raincoat in their boats with the Memorial ACTe in the background, stray dogs, the water area of La Darse which is similar to a mirror at dusk, sunsets, craftsmen and gwoka players in the pedestrian street, pelicans near La Darse fish market, Christ on the cross, cookers in Creole dresses, the social movement in 2009 against “pwofitasyon”, Vatable street, graffiti, flooded streets, the bell tower of the church of Massabielle, ironworks, colonial-style houses, small houses with in the background the two high towers of Lauricisque, sheet metal constructions and some images of the shooting of a film about the sugar cane workers strike and the violent repression by the police in 1967…

All these pictures were presented by theme : “To become”, “No way out”, “When the Story is told”, “Mirror”, “Words”, “A Saturday morning”, “Loneliness”, “Ballet”, “Carousel of Sun umbrellas”, “Duel of Light” etc. “I like natural folklore, burlesque. I mix architecture with the daily life, I wait for something to happen. Strong emotions, life attract me more than landscapes. They say that nothing happens in Pointe-à-Pitre, I see life. I photograph what other people don’t see”, said Geneviève Richard. And to illustrate her point, a phrase from Guy Béart’s song – “Les Souliers” (The Shoes) – “How many men who walk without seeing“, decorated the exhibition room. Other authors like Florette Morand and Alfred de Musset were also present through their works… 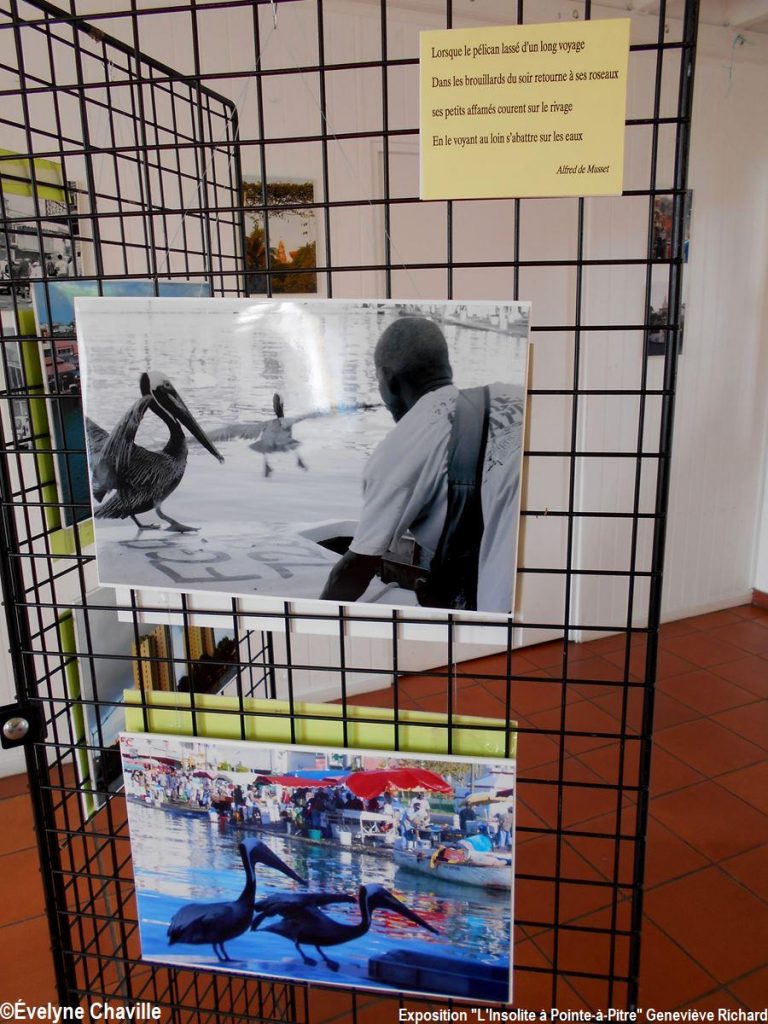 Guadeloupeans who increasingly consider photography as a real art did not hesitate to acquire photos during the exhibition. “I am surprised. Most of the time, it’s people who want to buy a picture that reminds them of their youth, sometimes in a larger format…”, said the photographer.

It was not the first time that the young woman photographed a city. She already photographed several other Caribbean cities namely: Bridgetown (Barbados), Roseau (Dominica), Castries (Saint Lucia) San Juan (Puerto Rico) and Havana (Cuba). “All these cities of the Caribbean have something in common: people have a nonchalant attitude, people take time to live, people speak loudly… During three weeks in Havana, every day, I walked through the city to find interesting scenes of life to shoot. People were very proud to be photographed and they said to me : “If you take our picture it is because you find us beautiful”. But It was not the same thing in the other Caribbean cities (…)”, she told. Maybe one day, she will decide to organize a major exhibition on several cities of the Caribbean…

Geneviève Richard has projects. She is a member of “La Milonga Negra” and often the association that practices Argentine tango asks her to take pictures of the events it organizes or in which it participates. Because she is not very satisfied with her pictures, she wants to take a course to learn how to shot moving pictures in low-light.

In addition, she would like her students study by, using photographs, the seaside where there is life but also pollution.

Gérald Bloncourt : “I am steeped in this Haitian culture” 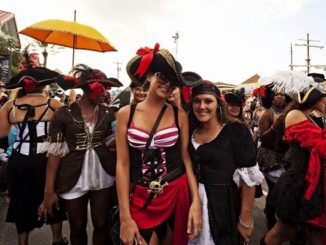