Thousands of spectators (but less than in previous years) from the agglomeration of Pointe-à-Pitre-Les Abymes and several towns of Guadeloupe applauded the hundreds of carnival performers who paraded through the streets of Pointe-à-Pitre, this Sunday, February 27. It was a “Dimanche Gras” like no other because Covid-19 was haunting everyone’s mind. However, many seemed to want to “normalize” life by not wearing masks (thousands had been distributed) or by not respecting the safety distances, safety measures that are very complicated to put into practice in a carnival… The traditional merchants of sorbets, pistachios, drinks, bokits and other local specialities were present, the cancellation of carnival and other popular events since the beginning of the pandemic having drastically reduced their incomes. The rain which had made its appearance in the festival did not discourage the crowd which remained along the streets during all the show that is from 2:00 pm until 10:30 pm, the curfew having been set at 11:00 pm. 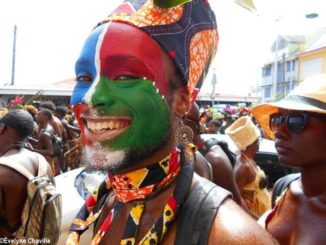