In the Carnival of Guadeloupe, two major events bring together between 60,000 to 150,000 spectators each year: the Giga Parade of Mardi Gras in Basse-Terre, the administrative capital of the archipelago and the Grand Parade of Fat Sunday in Pointe-à- Pitre, a city which was still recently the economic capital and which is now behind Baie-Mahault with its industrial zone, Jarry.

This Sunday morning, Pointe-à-Pitre woke up in a sort of torpor as for announcing the tornado of carnival decibels and colors that will rain down on it for twelve hours.

This meeting on Fat Sunday was an opportunity to appreciate once again the diversity of the Guadeloupe carnival with its “snare drum groups”, its “Ti Mas groups” and its “skin groups”.

About fifty groups (a majority of snare drums and Ti Mas ) from all over Guadeloupe were registered to take part in this grand parade of Fat Sunday in the streets of Pointe-à-Pitre. The starting line was located at the fishing port in the Lauricisque district. This year, the organizing association – the Groupement pour la Culture et le Carnaval en Région Pointoise, GCCRP – had insisted that all the groups be present at the start and at the time indicated in advance; it was expected that each group would start on the circuit every 3 minutes and that the latecomers would not start… Before 5:00 pm, all the festival-goers had already enter the circuit to parade in front of the thousands of spectators (locals and tourists) who were going crazy…

Around 7:00 pm, it was the turn of the “skin groups” to start their parade and if the starting point was the district of L’Assainissement, as usual, these formations then took their own route and closed the King Vaval celebration after midnight.

Do you know Jah Nissi Haïti and his latest song “How many more?”? 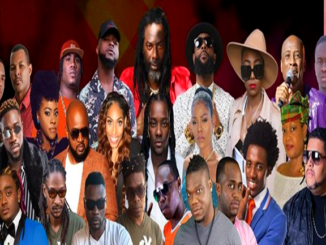