Once a year, Santiago de Cuba becomes the capital of the Caribbean. And not just because it is the most Caribbean city of Cuba because of its geographic location. No. Other reasons are more important. Every first week of July, Santiago is the center of the Caribbean because for 36 years it welcomes, without interruption, the Festival of the Caribbean. An event that gathers during seven days, the expressions of traditional and folk culture of our multilingual, multiethnic and multicultural geographic region.

It is also known as the Festival of Fire, because the mambises set fire to the cane fields during the struggles for independence ; because the slaves rebelled with fire ; because fire is heat, it is sun, it is brandy, it is drum, it is Santiago, it is Caribbean, this Festival was consolidated – after three decades – as the area where the Caribbean peoples identify themselves with a shared cultural context.

But the festival is not just a party, it is, above all, people. Myths and rites. Each year the event receives hundreds of visitors from other countries, aware that, despite the diversity of races, languages and customs, there is a common component in our roots.

The Chinese bugle sounds, the drums resound in the streets of the city. It is not yet carnival, but Santiago de Cuba sweats, dances, tramples in on conga line… It is the Festival of the Caribbean, it is the song of blood, it is life which wants that all peoples are one.

The Caribbean is present, begins, comes to life again each year… in the streets of Santiago de Cuba.

The most important multi-cultural event of the island, whose philosophy is the defense of the popular and traditional culture of the peoples of the Caribbean, was born in 1981, under the direction of La Casa del Caribe (The Caribbean House) and under the auspices of Joel James Figarola, one of the most complete intellectuals of the Cuban nation. Its first name was the Festival of the Performing Arts of Caribbean origin.

From this first experience, it was decided that each year the Festival would be dedicated to a country in the region and since then, it paid tribute to the nations of the insular and continental Caribbean like Mexico, Dominican Republic, Puerto Rico, Suriname, Colombia, Guyana, Venezuela, Brazil, Haiti, Aruba, Netherlands Antilles, Trinidad and Tobago, the Commonwealth of the Bahamas, Martinique, the English-speaking and French-speaking Caribbean, Curacao, Pernambuco to amount to 36 tributes, one for each edition of the event.

The Mpaka, the emblem of the festival

Shortly after its inception, La Casa del Caribe instituted an international award to personalities and groups who distinguished themselves through their contribution to the development of popular and traditional culture : the Mpaka. An award which was for the Africans from the Congo a ritual and oracular object. The Mpaka is the main emblem of the Festival and it is given to the representatives of each invited country.

The Festival of Fire always takes place on a fixed date, from July 3 to 9. Seven days, which are preamble of the Santiago carnival and where the city turns into a performance venue for Caribbean arts.

Traditionally, the key moments of the festival are many : the Parade of the Snake, an event that opens the Festival ; the international colloquium The Caribbean that unites us, an essential event for the development of popular religiosity workshops, music workshops, storytelling workshops, popular theater workshops ; the tribute to the Slave Rebellion in Loma del Cimarrón, in the village El Cobre ; and La Quema del Diablo (the Burning of the Devil), which says goodbye to the festival until next year.

In addition to these activities there are presentations of folk groups, several workshops (popular religions, music, dance, visual arts, poetry, meetings of oral stories, galas, traditional festivities of the countries which participate in the event, the Haitian and West Indian festivities and the magico-religious ceremonies on Juan González Beach (Ode to Yemayá).

A network with the Caribbean

Over the years, the Fiesta del Fuego survived adversity and even physical absence of its creator. However, it was able to continue and legitimize itself in the region as a celebration of the communities where the Caribbean is recognized as unique.

The Festival has always been an advocate of the role of authentic culture of miscegenation and a synthesis of integrative methods, of intangible heritage and a relationship, at the same time, more global and more intimate among the Caribbean peoples.

For more than 300 years, one of the most important cultural expressions of the Caribbean is carnival. And lately, the Caribbean peoples have been linked by their carnivals. Among the numerous actions of brotherhood that promotes the Festival of Fire, there is the implementation of the Caribbean carnivals Network.

During the 35th edition of the event, took place the first plenary meeting in the presence of Colombian researcher and historian Alfonso Múnera, representatives of the Caribbean delegations, intellectuals and specialists of these festivities which are well-known, traditional, multitudinous and with popular roots.

The Network was created to promote exchanges of experience, initiatives, skills and knowledge and to share visions and strategies on cultural policies in order to strengthen carnivals as a public party.

Carnival, motor of the economy

In the case of Cuba, in particular Santiago, carnival is considered as the most important cultural event of the city. The festival has an impact on the whole society of Santiago, it boosts the economy and puts in the center of attention all cultural and social structures.

The famous congas and comparsas of Santiago make some noise on the streets of the city every July, after the Festival of the Caribbean. Like the rest of the city, in recent years, carnival has expanded to reach public spaces. Not only it takes place in the streets of the centre, now it also comes to the districts. The outskirts has appropriated carnival and this one has spread to areas that are not part of the remarkable rings of the city.

This Carnivals Network, according to several Cuban specialists, “is one of the best things that can happen to Santiago carnival because that allows it, from a structure of relationships, popular and scientific knowledge, to transcend the geographical boundaries of Santiago”.

To share with other expressions of popular culture, to dialogue with other local actors in the Caribbean is a mean for greater openness and to give the floor to popular knowledge and academic knowledge.

The latest edition of the Festival of the Caribbean, the 36th, was dedicated to the popular culture of Ecuador and brought together 21 representatives from Ecuador and more than 600 participants from 22 countries. While about 2,000 artists from Cuba were present.

With the traditional and ceremonial entrance song to Elegguá who blesses the city and all the peoples of the Caribbean, began the popular and colorful Parade of the Snake, which opens each year the Festival of the Caribbean.

Santiago, the most Caribbean city of Cuba

From Marte Square to Céspedes Park and all along Aguilera Street, many delegations with different folk traditions and artistic expressions paraded to the rhythm of drums and Chinese bugle.

Children, storytellers, young artists, theatre and danse companies for children from the province, the steelbands from Cobre and Trinidad and Tobago, folk groups from Ciego de Ávila, Matanzas, Camagüey, Pinar del Rio and Cienfuegos paraded with the artists of several invited countries such as Mexico, Dominican Republic, Argentina, Colombia and Ecuador.

On this occasion, the festival took place in more than 40 areas of Santiago de Cuba and its usual activities became distinguished : the international Colloquium The Caribbean that unites us, the Haitian and West Indian parties, and the tribute to the slave rebellion.

The traditional gala of the country guest of honor became an international gala of solidarity with the Andean people because of the earthquake in northwestern Ecuador last April.

But the custumary and popular expressions were not the only protagonists of the exchange and debate, the magico-religious ceremonies which form part of the history and idiosyncrasy that unite us gathered at that meeting.

Songs to the gods of the Yoruba religion, rites like the Burning of the Cimarrón, in honor of the slave rebellion and the closure with the Parade of fire and the Burning of the Devil, a ceremony of Haitian origin led by voodoo priests during which, in front of Santiago Bay, they set fire to a big devil as a symbol of purification, showed the syncretism of our cultures, that has a common origin.

Santiago, undoubtedly, is the most Caribbean city of Cuba and although this Festival is ended, the space and dialogue exist so that, in a year, the expressions of our countries meet again and become more consolidated.

The 37th edition will be dedicated to Bonaire. 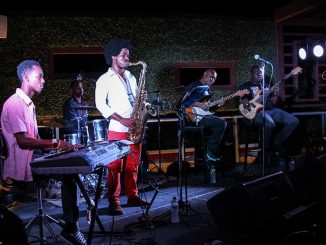