From February 5 to March 15, the painter Ronald Cyrille aka “Black Bird” was in residence at the Habitation La Ramée in Sainte-Rose (Guadeloupe). This stay was stopped because the artist had to travel to Miami to participate in the “Tout-Monde Festival” held from March 1 to 4. On March 23, took place the opening of the exhibition entitled “Traces d’Hier, Empreintes d’Aujourd’hui” composed of works he produced during this residence. 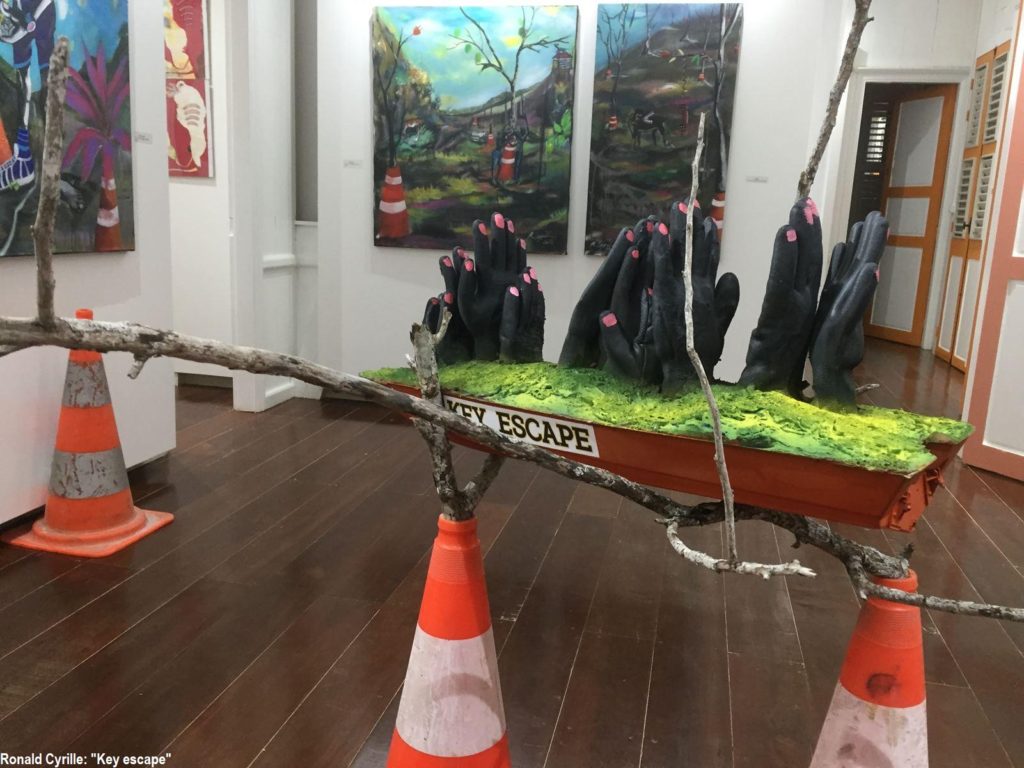 The exhibition “Traces d’Hier, Empreintes d’Aujourd’hui” (Traces of Yesterday, Prints of Today) comprises exactly 43 works which are based on Creole tales and myths but with a relation with the news in Guadeloupe (problems at the Hospital Center of Pointe-à-Pitre, violence, lack of water etc). “The trace is more random, the print is more meaningful, it’s like an identity card. At first when I was doing graffiti, people were wondering about what I was doing in the street and, little by little, there was a recognition, an affirmation of this work even if it will desappear over time”, said Ronald Cyrille aka “Black Bird”.

These works are classified in several series : the first, called “Full and Cuts”, uses cutting and collage ; the second, “Key Escape”, is composed of paintings, drawings and installations ; the third, “Street Art”, was made on large canvases by using spray paint ; the fourth, “Aléatoire” (Random), includes works made with ink (on paper) or with acrylic paint, as well as two installations, one of which symbolizes with a hosepipe the current lack of water in some Guadeloupean homes… 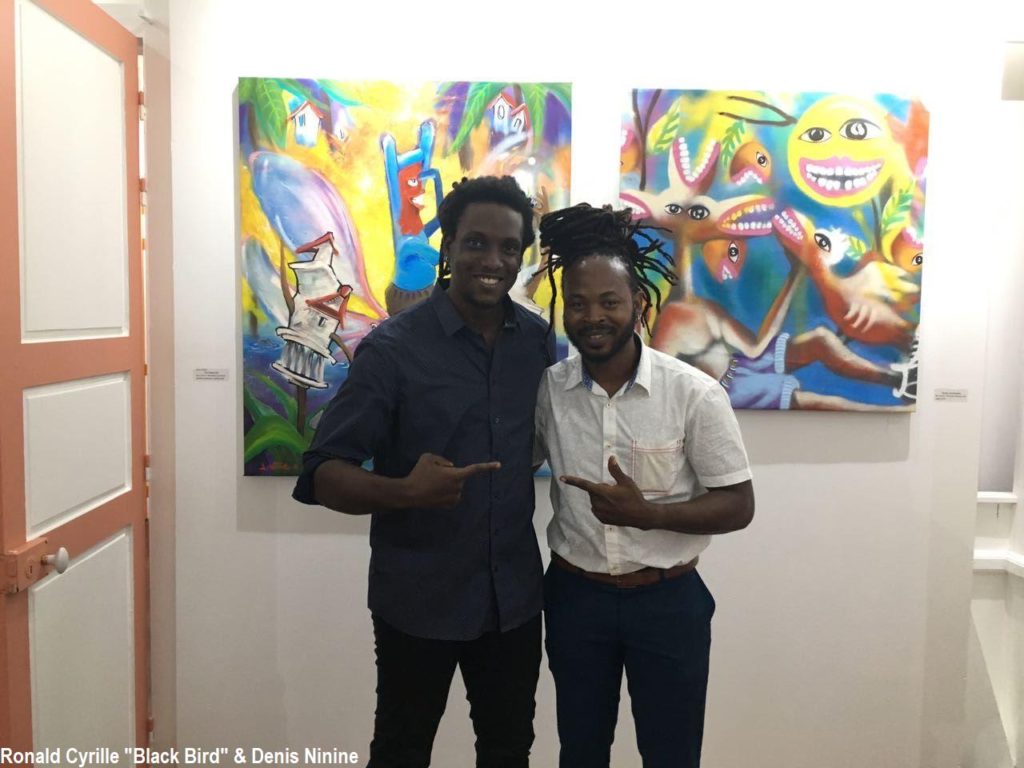 From the Habitation La Ramée…

During these weeks in residence spent in Sainte-Rose at the Habitation La Ramée (La Ramée House), a colonial house built in the 18th century, the artist was totally devoted to his art. “I did not have to worry about materials for painting, everything was supplied, and I lived there. So, I could produce in peace. It was a good experience”, he said. In addition, Ronald Cyrille facilitated a painting workshop for the public and two other workshops for students from Sony Rupaire High School in Sainte-Rose on the themes “To be indignant and denounce” and “From graffiti to street art”. The artist also invited a painter of his generation, Denis Ninine, to have an artistic dialogue with him.

The delivery of the works took place, on the occasion of the opening, on March 23, in the presence of Josette Borel-Lincertin, the president of the Departmental Council of Guadeloupe, the Collectivity which was the organizer of this artists’ residence and is the owner of the Habitation La Ramée since 1988. From March 26 to June 29, the public is invited to visit the exhibition “Traces d’Hier, Empreintes d’Aujourd’hui”.

It was not the first time that Ronald Cyrille participated in this type of experience. In 2015, he was welcomed to “Caribbean Linked III” in Aruba with 11 other young artists from the Caribbean (Jamaica, Haiti, Barbados, Trinidad & Tobago, Bahamas, Curaçao, Aruba, Surinam, Guyana, St. Vincent & the Grenadines). 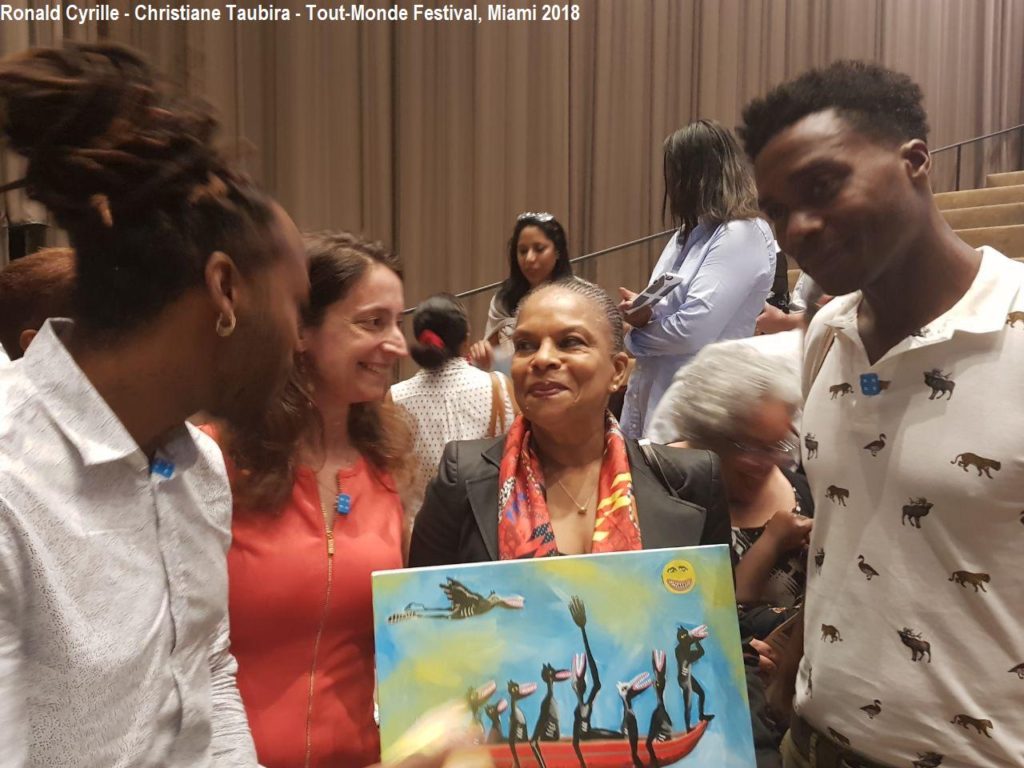 To Bandjoun Station House via the Tout-Monde Festival

The period in residence of Ronald Cyrille was initially from February 5 to March 5 but it lasted ten days more because the artist had to go to Miami (United States) on February 27 to participate in the 1st edition of the Tout-Monde Festival which took place from March 1 to 4. “I received two invitations: one from the French Embassy and the other from the group of artists “Street Art for Mankind”. I made a live painting in association with the street dancer from Miami Stephan Gibson and the slammer from Martinique Black Kalagan”, he told. Ronald Cyrille also went to the International Studies Charter High School in Miami, one of the best American high schools, for an artistic performance and he talked in French and English with students from several classes.

It should be noted that Ronald Cyrille was one of twenty artists from the Caribbean (Guadeloupe, Martinique, French Guiana, Haiti, Cuba, Venezuela) who were invited to the Tout-Monde Festival, organized by the cultural services of the French Embassy in Miami under the patronage of Christiane Taubira, cultural ambassador of the festival and former Minister of Justice of France.

In a little while, Ronald Cyrille will fly to Cameroon for his third artist residence at Bandjoun Station House. Indeed, last year, the Cameroonian painter who initiated this project, Barthélémy Toguo, was on the island, he met the young painter and he bought four of his paintings which now are part of the exhibition entitled “L’Afrique, le Grand Festin” (Africa, the Great Feast) at the prestigious Mario Mauroner Contemporary Art Gallery (MAM) in Vienna, Austria. At that time, he also invited Ronald Cyrille to come in residence in his country…