Born on March 27, 1948 in Sainte-Anne, Guadeloupe, Lukuber Séjor considers himself a “fighter for the Creole language”. Last Saturday, July 7, on the occasion of its 3rd birthday, the Memorial ACTe had invited the artist to present to the public his “Maké Kréyòl”, (Writing Creole) and his “Jé pou tèt san kalkilèt” (Game for the head without pocket calculator).

Since its opening in 2015, the Memorial ACTe regularly invites Lukuber or Likibè Séjor who is now 70-year-old to give his knowledge to the public. On Saturday, July 7, the “Caribbean Center for Expressions and Memory of the Transatlantic Slave Trade and Slavery” celebrated its third anniversary but because of the first cyclonic phenomenon of the season – Hurricane Béryl which became after a tropical storm – most of the events were postponed until August 4. However, the management of the M.ACTe maintained the meeting with the one who presents himself as a “militant of the Guadeloupean tradition” who defends the Creole language writing and the mental calculation. From 5:00 pm, the Salle des Congrès et des Arts vivants (Congress and Living Arts Room) filled up little by little in particular with parents and their children who had come to participate in “Maké Kréyòl” (Writing Creole) and “Jé pou tét san kalkilèt” (Game for the head without calculator).

An active participation of the audience

It should be noted that although the Guadeloupean people speak Creole, many do not completely master its writing; it also should be added that the elaboration of a creole spelling and grammar dates back mostly to the 1980s with the publication of dictionaries of words, dictionaries of proverbs etc … In addition, for years the Creole language has been teaching by the National Education.

At first, Lukuber Séjor proposed to the audience a short revision of the different sounds of the Creole language. Then, the artist began to put on two small white boards series of letters with which the spectators had to write Creole words. The answers began to come from all sides, some were correct, others not but when there was any doubt, Lukuber Séjor asked the “peace judge”, i.e. his famous Creole-French dictionary.

After the “Maké Kréyòl”, the artist proposed to the spectators-actors the “Jé pour tét san kalkilèt”. They had to find the exact number of crabs according to the statements. For this game, it was essential to know the multiplication tables… Children enjoyed these two entertainments a lot, they also were attracted to the letters, cards and horns used by Lukuber…

A fighter for the Creole language

At the end of the event, some spectators came on stage to take pictures with the artist, others asked him for information about his alternative method but Lukuber Séjor was particularly moved when one of his fans who educates children took out of her bag all his CDs and books (especially the comic titled “Abolo” and published in 2007 which won the Renaudot Prize)… “When I was at school, the teacher, Mrs Ramée-Décordin, made us recited like a song all the multiplication tables, we also used the coconut sticks to count. I grew up in the countryside where we spoke Creole, so what I could do only could be in Creole, I am a fighter for the Creole language, I also fight to free the mind. In addition, I appreciated Gérard Lauriette’s educational method (…) At the Institut Médico-Éducatif (IME) in Le Moule where I was a technical youth worker from 1987, the children came to my workshop with their teacher and we already worked with crabs, crab traps to learn how to count (…)”, explained Lukuber Séjor to kariculture.net after the event. 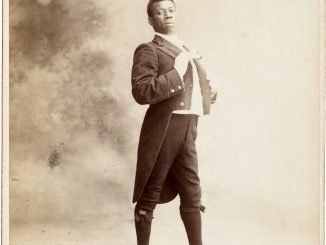 The Cuban Rafael Padilla, the first black artist in France 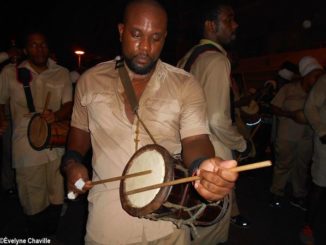