It is known that in skin groups (gwoup a po, in Creole), that is to say carnival groups in Guadeloupe who play their music on drums covered with a goatskin, incense is an essential element. No self-respecting skin group will go out without its incense smoke and, throughout the parade, the person in charge of this highly important task must never let the charcoal and incense go out.

Incense, the purifying element par excellence known for thousands of years, is used to chase away bad vibes and especially bad spirits, evil spirits attracted by the sound of the drum that could mingle with the crowd, take this opportunity to jump into the bodies of revellers already in a trance by the music and provoke incomprehensible scenes (arguments, fights, injuries, murders etc.), in short negativity, violence, chaos.

How can we not resist comparing the Prefect of Guadeloupe to the incense bearer in the skin bands because he decided to create a purified carnival, more supervised and adapted to the Covid-19 period?

Indeed, on Tuesday, January 12, during his weekly report on the epidemic of Covid-19 in the archipelago, the State’s representative recalled that all parades of carnival groups remain forbidden ; it must be said that last weekend, there were a few revellers rebellions with small “wild” parades of skin groups.

So the Prefect proposed to draw up a “Charter of Commitment” with the carnival actors for this new “healthier” carnival. He announced that it was envisaged that carnival groups, especially skin groups, would play in their premises respecting the barrier gestures, with a specific number of members (50 people maximum) and above all behind closed doors, i.e. without any spectators or listeners in the area. 15012021 charte répétitions et entrainements carnavalesques

In addition, the grant of €200,000 (€100,000 from the Ministry of Culture, €50,000 from the Regional Council of Guadeloupe and €50,000 from the Departmental Council of Guadeloupe) announced last December to finance carnival projects during Covid-19 could be used to film these digital carnival music concerts, he added on a local private radio station. Thus, revellers and the general public would be invited to log on to social networks or watch television to take part in the festivities.

The idea could seem interesting because these digital concerts could promote the Guadeloupe carnival if those in charge of tourism establish a real communication plan with the Tourism Committee of Islands of Guadeloupe (CTIG) sub-offices abroad, travel agencies, tour operators or foreign media, for example, in order to relay this cultural event.

The few Caribbean islands such as Saint-Kitts & Névis that banned parades but digitized some of their carnival events in 2020 did so in the spirit of making their culture better known, selling their island and attracting foreign tourists.

But, if it is a question of making digital concerts with a high cost so that Guadeloupean Internet users from France or elsewhere can say “I love it” in messages, it doesn’t bring anything to local tourism because we keep to ourselves. And then, the Carnival of Guadeloupe must solve this major problem between : groups who agree to make carnival a tourist industry and groups who want carnival to remain a popular space protest…but they often receive public subsidies. These are our contradictions.

Despite all that may say, the carnival of Guadeloupe is not (yet) an industry that brings money to the Guadeloupean economy. Certainly, it provides a living for merchants of fabrics, shoes, wigs, make-up, pistachio nuts, sorbet, juice, bokits, sinobol, drums, DIY products for decorations, dressmakers, designers (recently) etc.

But, no plane full of tourists who have booked months in advance hotel rooms, cottages, restaurants, cars, buses or others come here especially to attend the carnival of Guadeloupe. The many tourists present in the archipelago at this time of the year – the vast majority of them come from France and are on winter holidays – enjoy our carnival free of charge.

As Guadeloupe now has its own airline company – Corsair – why not introduce a “carnival tax” on airline tickets at this time of year?

In any case, if these digital concerts or rehearsals mentioned by the Prefect of Guadeloupe are organized, a lot of questions remain unanswered.

Who in Guadeloupe will be able to resist when the drum is calling?

How many people will stay quietly at home when a group in district or the group they joined is playing in their premise?

How will the groups choose the members to participate in these weekend rehearsals or concerts? Will these choices divide the groups?

Where will groups with dozens of musicians, who cannot be accommodated on their premises, go to play?

In the same way that groups were forced to find members to secure their parades, will they have to set up security around their premises to chase away intruders?

And if the situation is getting out of hand, will the police be called in?

Would it be better to centralize all the groups in the same shooting location that will be “protected”?

What will happen to the dozens of scooters and motorbikes that, like flies, precede or follow some groups? Covid-19 did not stop them all definitively since last Sunday, we did see two-wheelers and cars taking the direction of Darboussier where drums, siyak, chacha and lambi conchs then resonated for almost an hour.

Just as on this Sunday, January 10, many families were present, as at this time last year, on the Place de la Victoire ; there was an atmosphere which did not say its name but which resembled that of carnival time and the group playing gwoka in front of the kiosk was quickly reinforced by other people who came with their conchs, their drums, their whistles, etc. The need for expression of some revellers is difficult to contain…

And then, how can a population be forbidden to celebrate its carnival to curb the Covid-19 epidemic when thousands of tourists from France, a European territory greatly affected by this pandemic, are dumped on its territory during the Christmas and new Year holidays?

Like the incense bearers in the skin groups, the Prefect of Guadeloupe goes everywhere with the metal container so that the smoke chases out the disturbing elements in order to obtain an aseptic carnival in this time of Covid-19, in particular thanks to this famous Charter.

After all, perhaps the State’s representative will win this bet, since some skin groups that are claiming to be fierce opponents of the “French State” are often in a contradictory posture…

In some Caribbean islands, parades have already been banned by the authorities, and for the moment, no one is seen walking through the streets with drums.

And what if a large majority of the Guadeloupean population had already resigned themselves to not enjoying carnival in 2021, considering their health as essential?

So spending €200,000 on digital concerts would make no sense in an archipelago where carnival is not an industry. This sum would be more useful if it were divided between groups that might have employees or premises to pay and the small merchants and craftsmen who live on carnival parades.

Have the pollsters, who usually ask about anything and everything, ever asked this question to a representative sample of Guadeloupeans? Who knows? The results might surprise us… 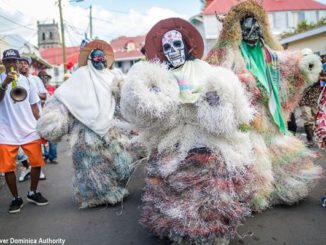