This Saturday, December 26, some 530 to 540 Kassav’ fans watched this live chat during which the members of the legendary Zouk band answered a few questions. It was not a live concert on social networks as some people had thought…

For the first time, on the day after the Christmas party, the group Kassav’ organized a chat starting at 8:00 pm in France (3:00 pm in Guadeloupe and Martinique, Caribbean) with its fans around the world. It was also about presenting its boxed set including 2 CDs of its 40th anniversary concert on May 11, 2019 at Paris La Défense Arena and 2 DVDs on this historic concert and the group’s tour in the Pacific at the end of 2019.

Several days in advance, Internet users had been invited to ask a question on Kassav’ Facebook page and, with a little luck, if it was selected, they were sure to receive an answer.

For very long minutes, the internet users had a kind of essay on the Martinican butter bread and chocolate – which corresponds to the Guadeloupean whipped cake and chodo – which are enjoyed on special occasions. The person at the stove was Jean-Claude Naimro who prepared the famous chocolate, there is no doubt that many spectators now know how to prepare it…

Jean-Philippe Marthély was the surprise of this meeting also broadcast on YouTube. Currently convalescing after a stroke, the Kassav’ singer took part in the live chat from Martinique. “I wish you a better year and see you soon on the stage (…) 2020 difé pwi san zalimèt (2020, the fire broke out without matches”, he said with his sense of humour…

After 14 minutes, Jocelyne began to read the questions sent by the audience that were selected. The first fan asked the release date of the next album. “We are preparing songs, we’re not fortune tellers”, the singer replied. To the question read by Georges, “When will the next hit be released?”, Jacob replied, “We’re working on it”.

A need to exist in the musical world

The bassist of the band had to leave because he is now working with Road Safety to make young people aware of the high number of drivers or pedestrians of their age who die on the road. From this collaboration with 3 young artists will release an album at the end of this year. “How do you cope with the absence of Patrick Saint-Éloi, who was a pillar of the group”, the answer came from Jocelyne Béroard : “At any time in life, we are facing a family, friendly, etc.departure, life goes on and we must continue, the best way to keep him alive is to continue to live and keep his memory alive”, she replied. “And his music”, Jean-Claude Naimro addeed. The members of Kassav’ are not against a collection with the different texts of their songs requested by another fan, but “it’s another job”, stressed Jacob Desvarieux. Since the concerts celebrating the band’s 40th anniversary were stopped, an Internet user asked whether in 2021 the tour will restart. Nothing is certain, since many concerts were cancelled due to the Covid-19 pandemic, according to Jacob and Jean-Claude.

A fan also asked Jocelyne to explain a sentence she had said in an interview: “Zouk is learning to get up”. After a laugh, the singer agreed: “I may have said that because when Pierre-Édouard Décimus created a musical style, it was because there was a need to exist in the musical world, not only in the Caribbean but all over the world. In fact, it was a little pretentious because we decided to exist in that world when we are very small (…) I think it’s a way of standing up and saying: I’m here, I exist”. So Jacob and Jean-Claude agreed.

This meeting ended in a good mood. The boxed set for the 40th anniversary which was released on December 4, was shown on screen. 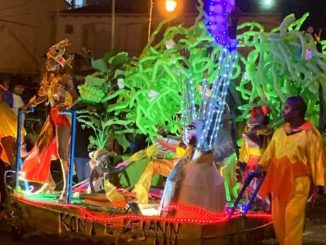