From January 23 to 30, 2016, Fondation Haïti Jazz organized the 10th edition of the Port-au-Prince International Jazz Festival with many guests from Europe, Africa, America and the Caribbean islands.

Created in March 2007, the Festival International de Jazz de Port-au-Prince gradually gains popularity in the Caribbean music scene. For ten years, he is the major meeting for many jazz musicians from the whole world and for an very knowledgeable audience. This year, several big names responded to the invitation of Fondation Haïti Jazz, chaired by Joel Widmaier, radio personality and musician. Among them, Oliver Jones Trio from Canada, Trio Thomas Siffling from Germany, Cor des Alpes Quartet from Switzerland, the band Pie Grande from Mexico, The 1688 Collective from Barbados, Wèspè Pou Ayiti made up of Richard Payne from St Lucia, Sonny Troupé from Guadeloupe and Jean Caze from Haiti, the duet with Mario Canonge from Martinique and Annick Tangorra from Italy, Manu Codjia from France, Chano Domínguez from Spain, Agustin Moya from Chile, Yomira John from Panama, Omar Sosa from Cuba, Baba Jah from Benin and Nigeria…

One of the objectives of Fondation Haïti Jazz is to promote the practice of jazz music in the country of rara and konpa music and to encourage the broadcasting of Kréyòl jazz on the island and abroad. Consequently, many Haitian artists performed on the various stages of the festival which were set up across the capital. The performance of the Haitian All Jazz Stars did not go unnoticed in Park Historique de la Canne à Sucre. This group is the illustration of the democratization of jazz in Haiti. It consists of six renowned members : saxophonist Godwin Louis, a graduate of the prestigious Thelonious Monk Institute for Jazz Performance ; drummer Obed Calvaire who recorded with Wynton Marsalis ; trumpeter Jean Caze, 2006 winner of the International Trumpet Guild Jazz Competition ; Mushy Widmaier, one of the best Caribbean jazz pianists ; Jonathan Michelle, a bassist who is very much in demand on the scene of Creole jazz in New York ; Pauline Jean, a contralto singer.

We hope that, in the immediate future, Fondation Haïti Jazz will be able to assess the cultural, economic and social significance of Haitian musical rhythms, it is also one of its missions. 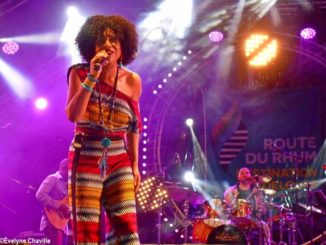