From October 1 to 30, an exhibition entitled “Fantômes Caraïbes” (Carib Ghosts) and composed of 35 photomontages and 35 paintings, takes place at the Édouard Chartol hall at Rémy Nainsouta Cultural Centre in Pointe-à-Pitre. The author of this work on the Amerindians is Hugues Henri, Doctor of Fine Arts and visual artist, who lives in Martinique.

Hugues Henri (67 years old) is not a stranger in the art world in Guadeloupe because between 1983 and 1990, the audience had the opportunity to discover his works during his solo exhibitions or collective exhibitions organized by the association “Traces” with, for example, Roger Arékian, Lucien Léogane.

It must also be said that before settling in Martinique in 1990, where he taught at the Institut Universitaire de la Formation des Maîtres (IUFM) and at the University Antilles-Guyane (UAG), this native of the city of Béziers in France was a professor of visual arts at the École Normale in Pointe-à-Pitre, Guadeloupe.

“This exhibition “Fantômes Caraïbes” (Carib Ghosts) represents a cycle of 10 years of work, from 2009 to 2019. Part of this work has already been shown at Villa Chanteclerc in Fort-de-France, in 2018. I made the decision to exhibit here, a year and a half ago, I added and changed things”, said Hugues Henri.

With regard to the photomontages, this Mesoamerican and Pre-Columbian civilizations enthusiast who discovered the archaeological collection of the Edgard Clerc Museum at Le Moule and visited the Parc des Roches Gravées in Trois-Rivières during his seven-year stay in Guadeloupe first made a lot of photos of the places where these Amerindians lived. “In a way, it’s a tribute I am paying to Guadeloupe since I used some local sites for these photomontages“, he said.

Then, he had to make a choice of natural backgrounds, texture, debris evoking the past and the present. The people integrated into the photos come mostly from the Guarani and Zo’é tribes in Brazil, only a few come from French Guiana. “In fact, in 2005, I was invited to participate in the “Year of France in Brazil” because I had published a comic book adapted from the novel by Jorge Amado, “The Old Sailor”. I took advantage of this three-month stay to go to Santarém, a medium-sized city, where the Olympic Games of the Amerindian nations was taking place. I was not officially invited to this meeting which is held every two years but, for a fortnight, I was able to meet these peoples and photograph them”, said the artist.

It was only in 2009, the artist decided to use this image bank. “I wondered how to bring the two worlds together to revive the pre-Columbian world in the West Indies”, he said. When we asked him what these Amerindians would think if they saw their photos integrated into unknown natural sites or cemeteries in an exhibition on ghosts, Hugues Henri replied: “I would be very surprised that they are against my “Fair Art” approach, it’s an expression I invented. They are in a survival process. The great chief Raoni who is also shaman already made eight international visits to alert the world to their living conditions, in France he met President Macron, he is Nicolas Hulot’s friend (…) Ghost, apparition, persistence are words that should lead us to look for and find the traces of the Amerindians who lived here in communion with nature”. And the artist quoted Jean-Pierre Moreau’s book entitled “Relation d’un voyage infortuné fait aux Indes occidentales par le capitaine Fleury” published by Éditions Payot which is an accurate translation of the manuscript of the Protestant buccaneer Fleury who lived in the West Indies between 1618 and 1620, so before the the development of European colonization…

During this interview, Hugues Henri also knew that in Guadeloupe, this part of pre-Columbian history is increasingly valued through cultural events and some people (including well-known artists) have Carib blood flowing in their veins. “So, it’s different in Martinique, some people are searching for Calinago ancestors (…)”, he thinks.

In addition to the 35 photomontages, the “Carib Ghosts” exhibition is also composed of 35 paintings made in acrylic. In fact, these patterns are “Zemis” or Spirits. “They were engraved on rocks in the Lesser Antilles (Guadeloupe…) and the Greater Antilles (Dominican Republic, Puerto Rico…). When we look at them, we see that there was a concern for visual and plastic quality, a rhythm with repetitions and variations. I first drew them and then painted them on the canvas”, explained Hugues Henri, with the “Zémis n°15” in his hand.

During these last ten years, the visual artist made about 200 works from the history of these indigenous peoples. But he said he still has a lot to say on the subject. A park project dedicated to Amerindian culture was launched at the beginning of this year in Le Lorrain, Martinique. “I submitted a file to build a three-point rock crossed by a path, an initiatory voyage. It will be a monumental concrete sculpture on which will be engraved all the petroglyphs in tribute to this civilization”, he said. 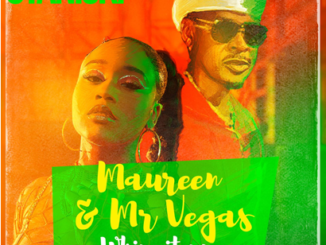 Guadeloupean Staniski, Martinican Maureen and Jamaican Mister Vegas arrive with “Whine it up” 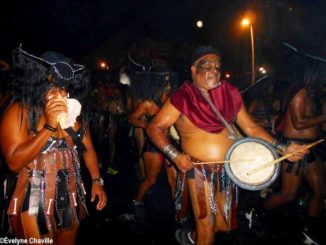