More than 50 years ago, Guadeloupean Andrée Monchéry, also known by her pseudonym Winny Kaona, chose biguine. In 1994, the great artist Moune de Rivel, nicknamed “The Great Lady of Biguine” (La Grande Dame de la Biguine), asked her to safeguard this traditional musical heritage. Alone but strong-willed, the singer and actress worked relentlessly with her own financial possibilities to succeed in this mission.  Kariculture.net met Winny Kaona, the artist who decided to go against the current musical influences and who has other artistic talents. 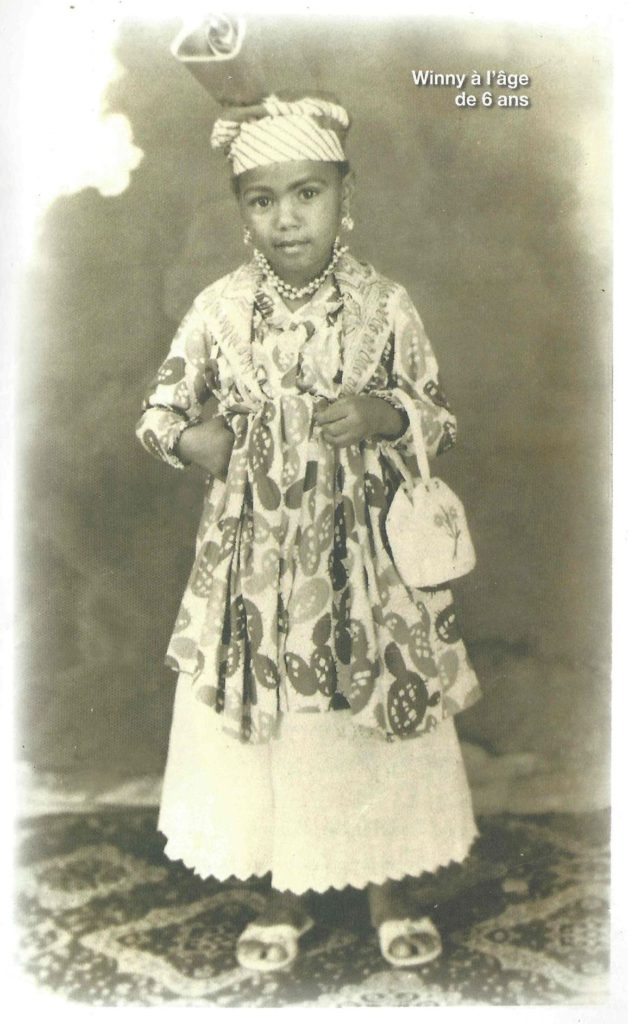 When we enter Winny Kaona’s apartment in Pointe-à-Pitre, we are immediately steeped in an artistic atmosphere. Many paintings are hung on the walls and the indispensable piano is in the middle of the living room. Immediately, the hostess makes us confortable and the discussion can continue for hours in perfect simplicity. But we do not forget that the one who speaks to us represents a part of our cultural wealth. So, we listen to her telling her career, “a carrer with songs but not only, a career with many obstacles and shared emotions,” she says.

Her encounter with singing and music was during her early childhood. Indeed, fifth child in a family of nine, her father Andréa who wished a son christened her Andrée, Marilyne will be her middle name. Real ball of fun, she spent her school holidays in her parents’ country house in Petit-Bourg and she did not escape spanking and punishment. Despite the love of her family, little Andrée felt sometimes misunderstood but her artistic soul allowed her to escape from the real world and take refuge in her fantasy world. 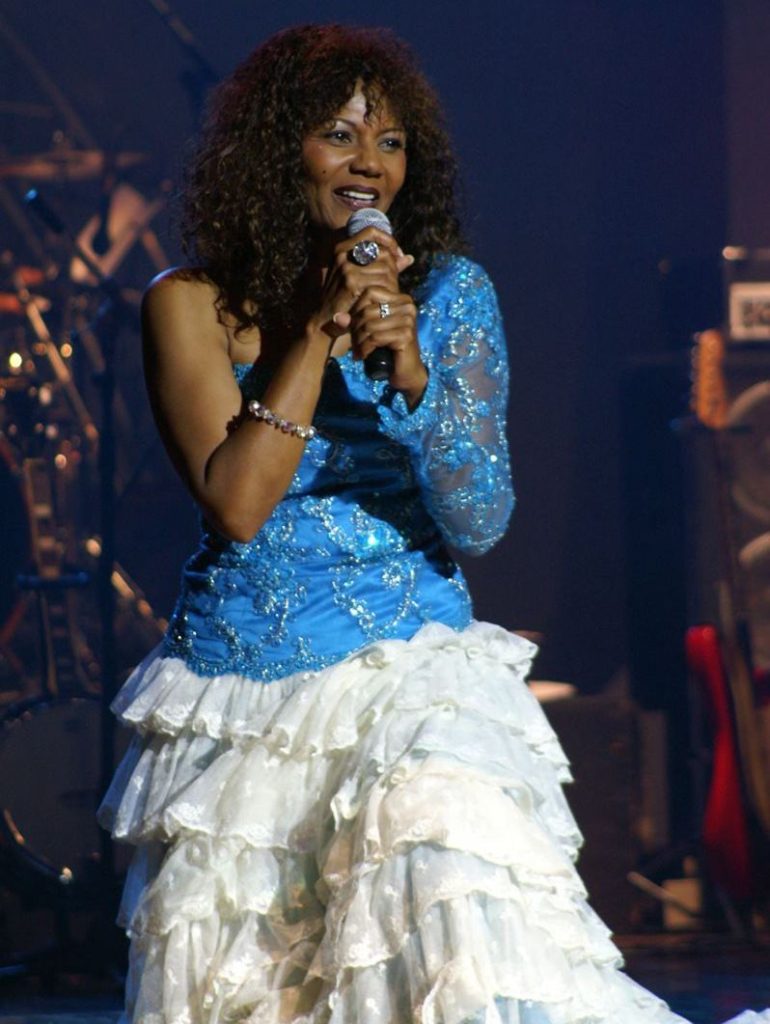 In the 1960s occured THE revelation : she heard Moune de Rivel’s voice. From that moment, the famous artist will be a role model for her. Andrée was 9 years old when she said to her mother that she wanted to become a singer and actress like “Woman” de Rivel (because Creole language was forbidden in the family home, she replaced “Moun” by “Woman”). She still remembers the furious reaction of the latter : “What? Could you repeat?”, she exclaimed. And she added : “a singer, a comedian, that’s not a job, it’s with that you think to earn a living?” (…) A teacher, a doctor or a lawyer, yes. A noble profession. You better study to get your bachelor’s degree what will allow you to study seriously and to have a good job!” She took her mother’s advice but her thirst for light remained intact. Andrée continued to listen to the fashionable stars on the radio : Henri Salvador, Gilles Sala, Léona Gabriel, Gérard LaViny and especially Moune de Rivel, her idol. Every Thursday night at 8 pm, the little girl listened religiously on the ORTF to the program “Charmes de Paris” hosted by the famous artist without knowing that she would become later her mentor. 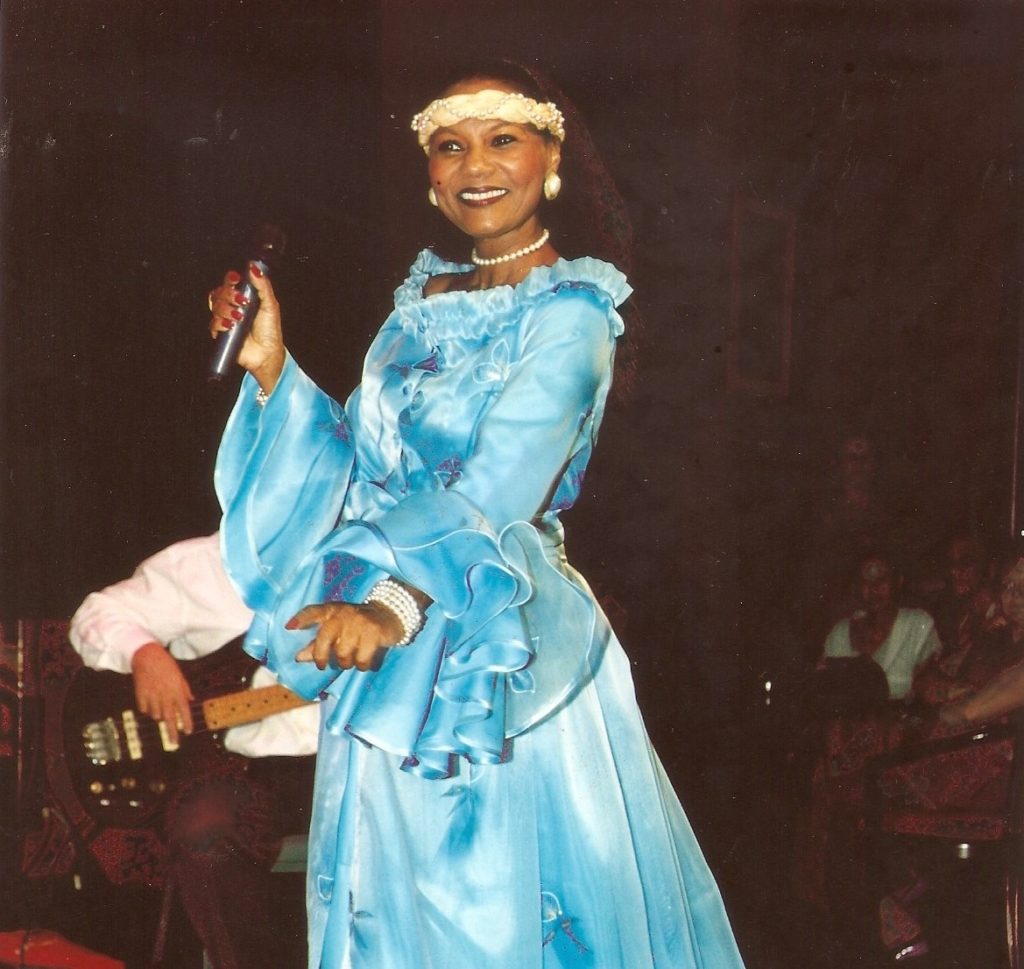 She learnt songs ; she sang alone but she also sang in front of her parents, her brothers and sisters : “After dinner, the large mahogany table, without its protective plastic served as a stage. Dressed in a cotton nightgown with straps and a “Petit Bateau” brand panty, trembling, I showed my skills before the stunned eyes of my family, my first audience,” tells Winny.

Then, came the years at the Baimbridge High School in Pointe-à-Pitre. She was 15 when she came on stage for the first time in front of a real audience with the Alexis brothers’ orchestra – “Les Yankees” – from Le Raizet in the city of Les Abymes. The band performed at Rotary Club gala evenings, local festivities and high school parties. Then, Andrée left for France to continue her studies at the École des Cadres de Vichy. Two years later, she got a diploma as Assistant Manager in Industry and Trade. She worked in France but also in Canada and then she returned to the West Indies to work in Martinique and Guadeloupe. She was the executive assistant of the Caribbean Regional Delegation of VVFand after she founded her own public relations agency. 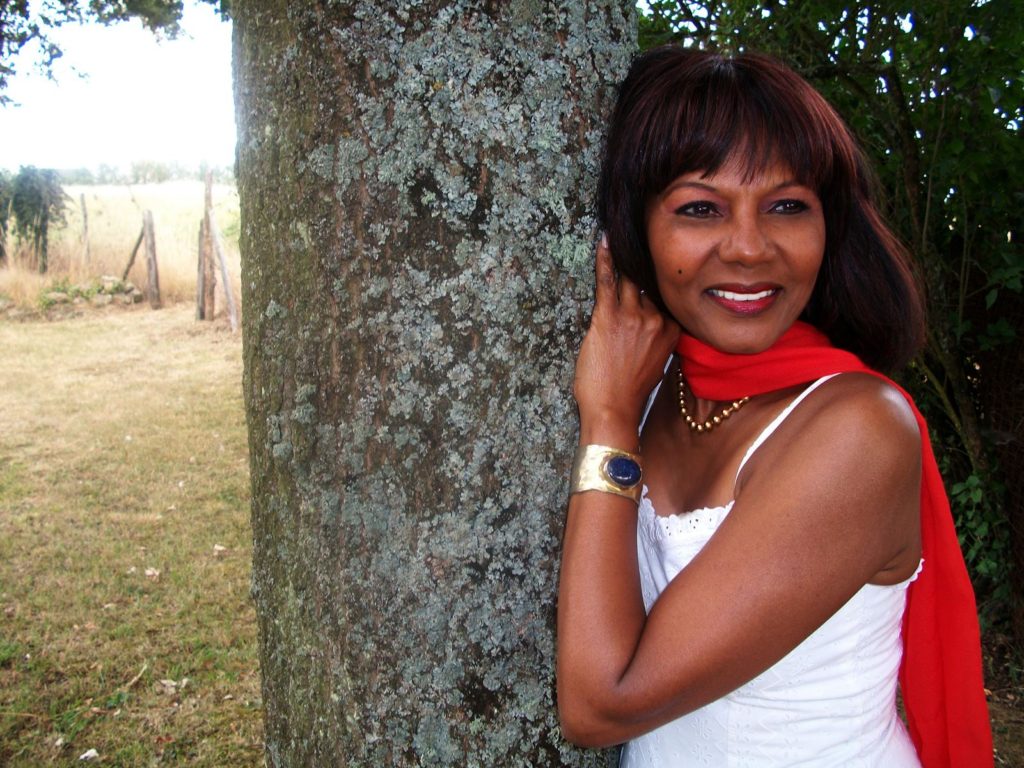 The birth of Winny Kaona

Because she did not forget singing, Andrée faced a dilemma : to continue her administrative work with a clear path or to undertake an artistic career with ups and downs? She chose to pursue both careers. The young woman is 28 years old. She was inspired by two women who have a temper to compose her pseudonym Winny Kaona : Winny as Winny Mandela, former wife of the activist against apartheid who became the President of South Africa, Nelson Mandela, and Kaona as Anacaona, the Taino chief on the island of Hispaniola hung by the Spaniards in the 16th century.

Very soon, she understood that she had to rely upon her inner strenght to make a success of this new challenge. Determined, she produced her first album.

In addition, thirty years after she discovered Moune de Rivel on the radio, Winny finally had the opportunity of meeting her thanks to a friend. She called her first to make an appointment, the latter was a bit abrupt when she answered her : “I do not receive my compatriots anymore but because you come from a friend, I wait for you.” 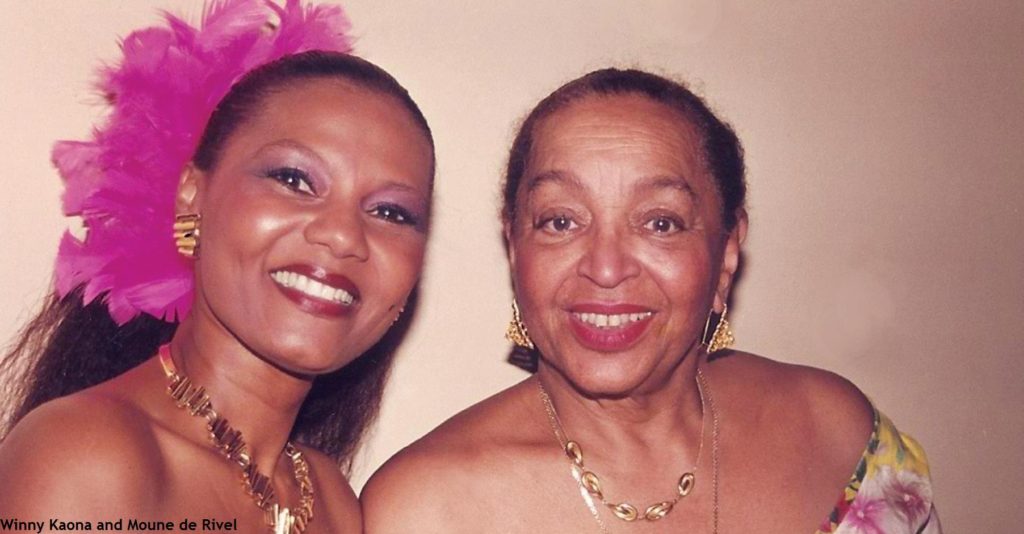 The meeting with Moune de Rivel

Today, with great emotion, Winny uses her comedic talents to tell in the smallest detail this first meeting that will be a turning point in her career : “I had bought a bouquet of purple flowers, Moune de Rivel’s favorite color, and I remember trembling, ringing at the blue door of this apartment which had been bequeathed to her by her mother at 11, rue Jules Chaplain in the Montparnasse district in Paris. She opened, she was wearing a purple dressing gown, I sat down at a table covered with a purple tablecloth. “Who are you?”, she asked me. I told her my name and my admiration for her since I was a child. When I told her that I would like to sing her songs, Moune de Rivel categorically answered me : “I do not give my songs to anyone!” Then she said, “It does not matter!” sitting down at her piano. I was in such a panic so I was unable to give her the key of the song I wanted to perform. It was “Cé Ou Menm ki Lanmou” by Al Lirvat. I started singing and right before the chorus, Moune de Rivel jumped out of her stool, wrapped her arms around me and exclaimed : “Oh, my dear Andrée, finally one of my own people, someone of your generation who is interested in me! Ask me whatever you want, I give you all my songs that will live after my death. Thank you, thank you from the bottom of my heart! “. 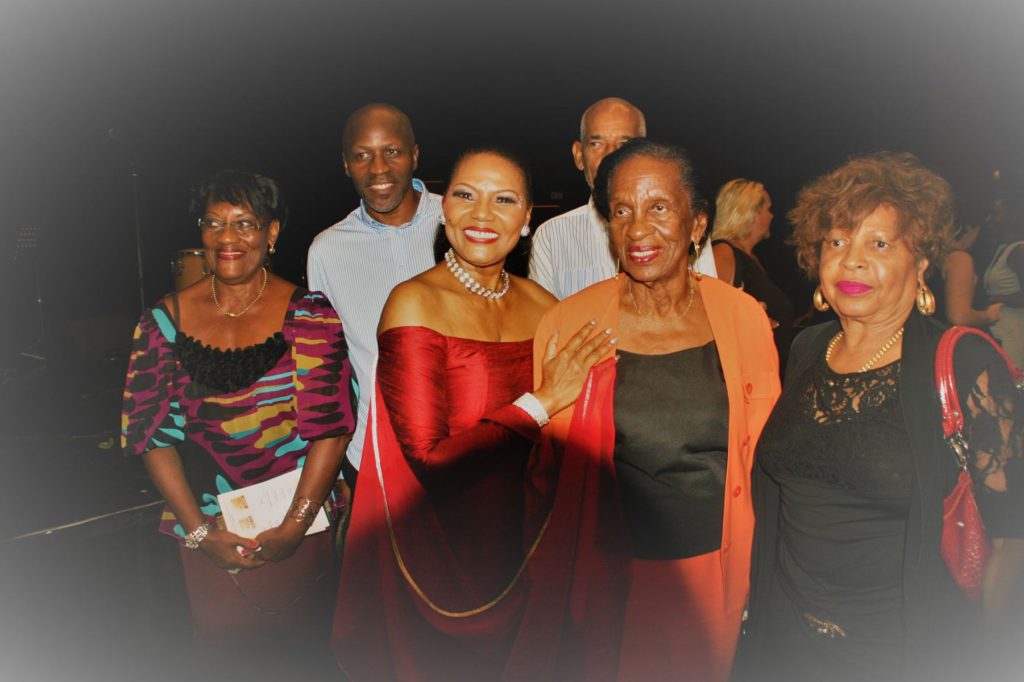 Moune passed the torch to Winny

From that moment, a filial friendship was born between both artists, with exchanges of letters and regular phone calls.

In 1989, after cyclone Hugo, Moune de Rivel, the singer, musician, radio host, actress, producer but also painter who was known internationally, returned to Guadeloupe after years of absence. She had in her suitcase a portrait of Winny Kaona that she made. She also wrote an unreleased song to her “spiritual daughter”, “Apel Gwo ka la”. In 1993, Winny and Moune performed together at Salle Adyar in Paris, accompanied by Guadeloupean pianist Alain Jean-Marie. At each of her public appearances, Moune de Rivel spoke of this emotional and artistic link between her and her “heiress”, Winny Kaona.

The following year, Winny Kaona decided to produce in honor of her mentor a show entitled “Encounter of the Traditional Creole Song from Yesterday and Today” at Le Centre des Arts et de la Culture in Pointe-à- Pitre. It was very natural that Moune offered her to sing in first part of the concert. On November 19, 1994, in front of a very large audience, the famous Moune de Rivel who promoted biguine around the world said : “I leave my torch of songs to Winny Kaona and I thank Emma, her mom, for giving me her daughter (…) “. If Winny is proud to have been chosen, she was also aware of the responsibility for such a legacy. 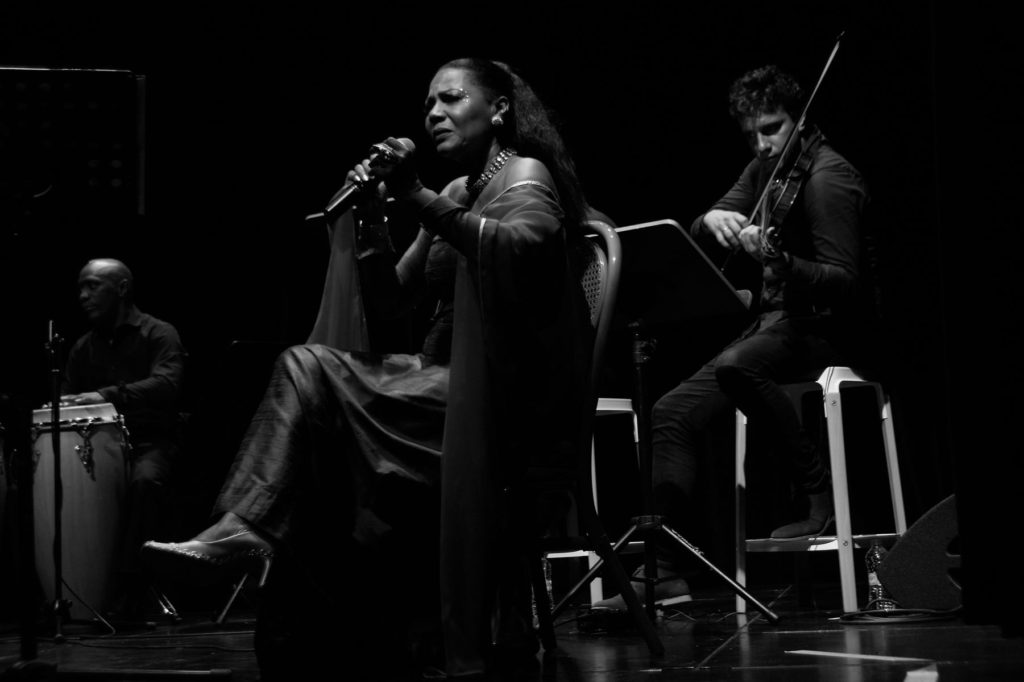 Moune who went back to Paris supported her with her letters and phone calls. “I am watching you from afar and I am proud of your talent, your persistence. Hang on, I am with you. Your mission is to make people love, sing this music and to leave this legacy to future generations, as I have always done (…),” she said.

Unfortunately, Moune de Rivel will not see the whole course of her “spiritual daughter” because of the disease, she died on March 27, 2014 at the age of 96, in Paris. As a tribute to this “Great Lady of Traditional Song”, Winny will write the title “Ma clé de Sol s’en est allée”. She also noted that Moune was gone three days before her birthday and three weeks before the premiere of her new show on “33 rue Blomet” in Paris, a mythical place of the early 20th century that contributed to the development of West Indian music.

For more than 50 years, Winnie Kaona is working to promote biguine. She produced her 18 albums ; she published several books, including the famous “Anthologie de la Biguine”in 2007 (now out of print), “Farine et Cendres, Confessions d’Îles Guadeloupe” (2010) and the booklet “Moune a Tout Moun” ; she wrote and directed the musical tale entitled “Légende de la Forêt Calouceara” in three parts from 2001 to 2014 with the participation of more than 700 schoolchildren from the cities of Pointe-à-Pitre and Baie-Mahault in order to make them aware of the environmental protection ; she presented several shows including “Le Bal Nègre de la Rue Blomet” (2014) and tributes to her “spiritual mother” in 2015 and 2016. Generous, she always invited singers and musicians to perform on the stage of her concerts unfortunately she says: “they hardly returned the favor”. 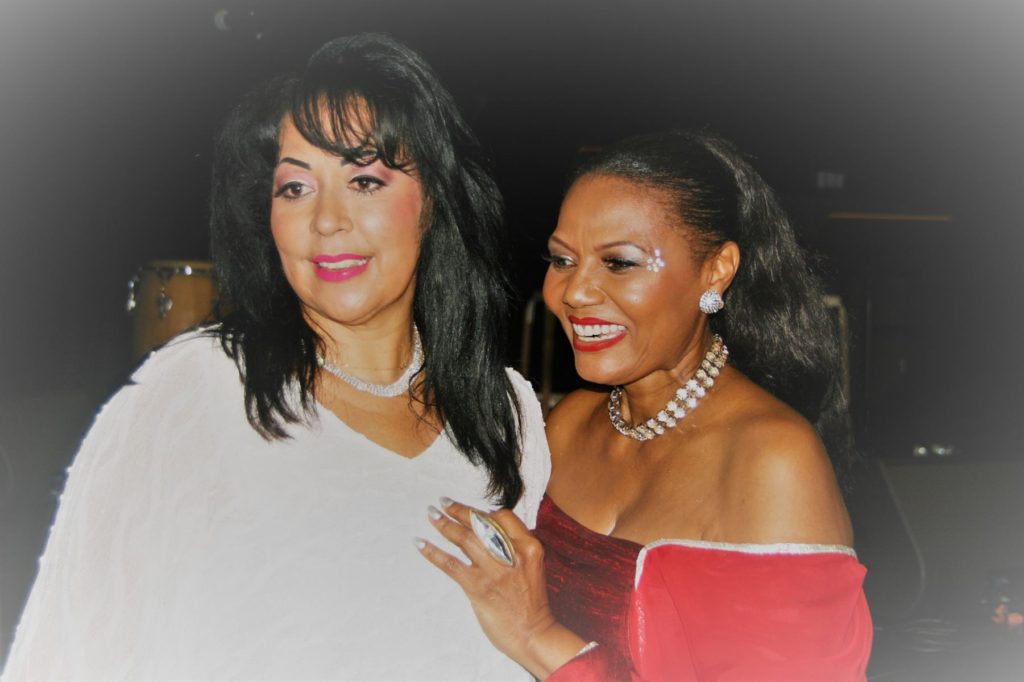 In addition, in 2015, Winny Kaona released the album “Au Fil de Soi” on which she performed, among others, songs by famous French singers (Barbara, Gilbert Bécaud etc.). In November of that year, she presented this record in a different musical genre to her fans who have been following her for many years at Salle Rémi Nainsouta in Pointe-à-Pitre.

Previously in July 2015, she participated in the Festival Off d’Avignon. “It was a great experience so instructive, so formative, essential for the evolution of any artist,” she asserted. In 2016, with the Association for the Development of Traditional Music / Association pour le Développement de la Musique Traditionnelle (ADMT), Cuba Cooperation Guadeloupe / Cuba Coopération Guadeloupe (CCG) and under the musical direction of Cuban Luis Marlon Blanco Rodriguez, she presented the show “9 Poètes d’Îles entre Elles” at the CinéThéâtre in Le Lamentin and at the Memorial ACTe in Pointe-à-Pitre. About this collaboration with Cuban musicians, she says that “it was an extraordinary experience”. 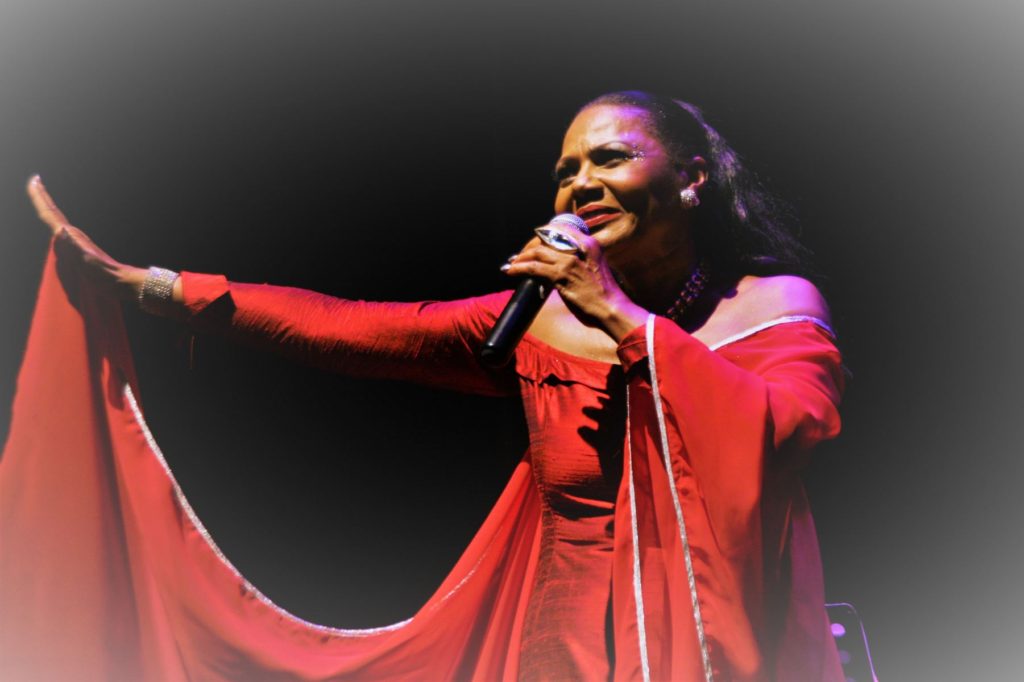 A trophy awarded by Unesco

Now, Winnie Kaona knows the influence of new musical currents in Guadeloupe but she is not afraid and she has many projects that she would like to realize to make people sing, play and dance biguine. She just wrote a musical show called “La Dictature des Mots”(The Dictatorship of Words) that currently she is directing with schoolchildren from Haiti, the Dominican Republic, Dominica and Guadeloupe. She is also preparing a great event for the centennial of Moune de Rivel’s birth which will take place in 2018 on the island.

But one thing is sure : this mission to protect this traditional music that Moune de Rivel gave her 23 years ago, now must be that of all Guadeloupe, especially its cultural decision makers, if our island does not want to lose a piece of its soul. 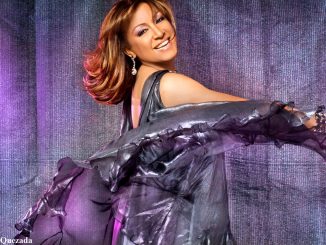 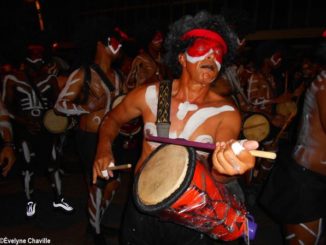 CULTURAL EVENTS and PUBLIC HOLIDAYS IN THE CARIBBEAN – FEBRUARY 2019