Léna Blou. A first name and especially a surname (Blou evoking blues music and the blue color in English) that many people think they are a pseudonym but they are in fact the true name of the Guadeloupean dancer and choreographer. The audience decided that her first name did not go without her surname, the stage name of the famous artist became naturally Lénablou.

For many years, Lénablou is one of the essential representatives in the island’s culture. The dance school she founded in 1990 – le Centre de Danse et d’Études Chorégraphiques(Center for Dance and Choreographic Studies) – located in L’Assainissement district in Pointe-à-Pitre, has already been attended by thousands of children (from the age of 4 years) and adults. In the entrance hall of the center, a tree was made with photos of dozens of students attached to the branches.

With the end of the school year, the center was transformed into a hive for the preparation of the final show, entitled “La Prophétie des Lucioles” (The Prophecy of the Fireflies). In addition, from July 3 to 14, the school organizes its traditional “Passeport Danse” which is a great success. During this training course for democratization of the art of dance, launched in 2015, everyone is accepted, regardless of gender, age, body size, skin color, social background, level in dance, etc. “The aim is to popularize dance, to break down prejudices in relation to this art, to say that dance is not reserved for a category of persons in society. Barriers fall, an alchemy is developed between people, they get to know each other and there is no obligation to perform. We dance to all kinds of music”, explained Lénablou, the director of the CDEC.

The CDEC as a nursery

Each year, between 250 and 300 pupils, the majority of whom are girls, are welcomed at the CEDC, but in past years, the number of persons enrolled exceeded 400 per year. Some students reached a very high level in the discipline and integrated prestigious foreign schools and companies, while others have professions related to art. That was the case with: Léo Lérus (professional dancer in Israel), Yannis François (dancer and opera singer in Switzerland), Cécilia Daninthe (professional dancer in the United States), Élodie Paul (former dancer with the Béjart company, currently in the movie business), Fabienne Marajo (director of a dance school in Martinique), Pascale Désiré (dancer in Paris), Armelle Morton (who became a designer after studying to be a lawyer) etc. “All are conscious of their Caribbean root, they are not afraid to say where they come from, as in the past with the older generations. They are aware of their Guadeloupean and Caribbean wealth and they want to promote it”, said Lénablou with satisfaction.

It was Jacqueline Cachemire-Thôle (a pioneer of gwoka dance and founder of Akadémiduka) who imbued Léna Blou with love of dance when she was only 6 years old. Indeed, when she was a teacher in Pointe-à-Pitre, she used to bring together the toddlers of her class every Saturday afternoon to teach them gwoka dance; her husband, Yves Thôle, is a well-known tambouyé (ka player) on the island. Until she was 17, Léna will practice dance with this great lady of local culture. Then, she will pursue her learning with Jean Nanga (modern jazzdance teacher) and in various training courses in Europe, the United States and the Caribbean.

Dancing as a mission

“I was always clear about the profession I wanted to practice. Dance was imposed upon me, I did not have to choose. I think I have a gift for art, a gift which was lent to me. I believe that each one of us is on Earth to do something, when you do not know what it is, you are unhappy. There are people (musicians, dancers in big companies that I know) who suddenly change their lives to do something else when they had a brilliant career. I know why I came to Earth. Nothing has so far damaged my passion for dance”, said Lénablou.

Since her father was a musician, she had almost no problem to get her future dance career accepted by her family, only the financial aspect raised a few questions… In Guadeloupe, she studied to become a nurse. In 1986, she left for France and continued to work in the medical field but, at the same time, she prepared a Diploma of General University Studies (DEUG) in dance and then a Diploma of Choreographic Performance in Jazz at the Sorbonne University in Paris.“It was incomprensible to me that I was a dancer without knowing my body. I became a nurse to know the anatomy, the human body and also to finance my dance studies in Paris.When I got my university degrees in dance, I stopped being a nurse to dedicate myself totally to this art”, she said.

A company to export talent

We cannot speak about Léna Blou without mentioning the compagny called Trilogie she founded in 1995 and that gives her the opportunity to collaborate for certain creations with foreign dancers such as Shantala Shivalingappa (India), Dayron Napolès (Cuba), Vittorio Bertolli (Italy), Vitolio Jeune (Haiti). Currently, in addition to Léna Blou, two other Guadeloupean dancers make up the company: Stella Moutou and Jean-Luc Mégange, both dance teachers at the CDEC. The trio will fly to Barbados on August 18 to participate in the 13th edition of Carifesta.

During her career, Lénablou already performed with great dancers from around the world, but she was greatly impressed by three famous artists: Mikhail Baryshnikov, the former Russian principal dancer, naturalized American citizen, for his great technique; Maurice Béjart, French dancer and choreographer, naturalized Swiss citizen (1927-2007) and Alvin Ailey, American dancer and choreographer (1931-1989). According to Lénablou, they are “the only two world-famous artists of the dance world that people can dislike but no one can remain indifferent to their talent. When they see their creations, they can only say: “Wouaw!”.

It should be noted that in 2003 the Guadeloupean had the opportunity to choreograph for “The Rudra Béjart Ballet” (Maurice Béjart’s workshop school) at the Théâtre Métropole in Switzerland.

In 2005, the Editions Jasor published Lénablou’s book intitled “Techni’Ka” (Recherches sur l’émergence d’une méthode d’enseignement à partir des danses Gwo-ka). So, her career as a dancer and an international choreographer will take a new turn. “My position was to defend aesthetic that comes from my territory, it is a small island, there is a lot of predeterminism. I successfully export this aesthetics all over the world (festivals, universities,conservatories etc.) Countries are calling me today for lectures, training courses on the Technika”, said the researcher with pride.

It took her more than 20 years to develop the Techni’Ka. Throughout this period, Lénablou went to léwòz in order to analyze the steps and gestures of the dancers, to try to understand and explain this famous technique. She was not too disoriented because gwoka was the first dance she learned and practiced. Her knowledge of anatomy allows her to detect the muscles of the dancers that work, her knowledge of music allows her to listen with an expert ear to the 7 rhythms of gwoka (Toumblak, Woulé, Padjenbèl, Menndé, Graj, Kaladja, Léwòz). After all these observations, she moved to the test phase, she taught several techniques, performed choreographies, here in Guadeloupe and elsewhere.

“Techni’ka is the result of a great deal of reflection. At university, when I began to learn dance history, I was fascinated to discover, for example, that dancing aesthetics changes according to the times… But, there was a vacuum in this knowledge because there was nothing about “black dances”. I decided to do this research on gwoka, this beautiful dance which is linked to the history of plantations on my island, in Guadeloupe. Intiutively, I was convinced that there was a complexity and a technicality within it”, told the professional dancer.

The imbalance of the “bigidi”

An important concept was highlighted in Techni’Ka : Bigidi. Some people suppose that this word comes from English, others express no opinion. The fact is that this Creole word was often used by our parents to talk about someone (usually drunk) who almost fell…

“Dance steps in gwoka have no name, the name corresponded to gesture.” Bigidi “is to be in imbalance as is the case of the gwoka dancer, we get the impression that he is going to fall but he does not touch the ground. I say to my students who cannot make the “bigidi” to think about contingencies of life, about tough breaks which jostle… We can even think that it is our capacity to resist, not to be devastated in the difficult times, to start a new life that our ancestors wanted to symbolize through this dance. We are “bigidant” beings”, explained the researcher.

However, gwoka (music and dance) is the depiction of the freedom of slaves, we can ask ourselves if by theorizing it, by codifying it, it’s also a way to lock up it, even if it is with the aims of teaching it… Lénablou replied: “I preserve gwoka more than we think, the léwòz night is for me a sacred space. I show its aesthetics, based on this matrix. I do not show the dance steps in a léwòz, I do not teach the soul of gwoka, I teach a Caribbean technique. I am creating. Moreover, I tell my trainees that I do not teach them how to dance, I teach them a technique, it’s up to them to interpret it with their own feelings (…)”.

However, after many years of creation and transmission to generations, the artist regretted that culture in its entirety is not taken into consideration by our decision-makers. With respect to dance, she said that there is no statistical report on the economic value of this artistic discipline on national level. “To be a dancer it is not recognized as a real job. In schools, the sports teacher is used to teach dance, but they do not hire a professional dancer. When a dancer is asked for performances, choreographies, lectures for example, very often those who invite him never think of asking for his rates, they consider that it is art so there is no payment (…) I can make a choreography for a singer but I will not get royalties. There is some progress because more and more people are recognizing us on the street, some of them look at us with admiring eyes and ask for autographs”, said Lénablou.

Since January, the choreographer is fighting a new battle. Indeed, she launched a fundraising campaign on the Internet in order to build new premises for the CDEC. “I’ve never seen Guadeloupe as a small country. This school will be a heritage. People are going to Paris to study classical dance, in the United States to study jazz. My dream would be that the whole world come to Guadeloupe to learn Techni’Ka, as Italians, Swiss, Nigerians, Americans have already done”, concluded Lénablou. 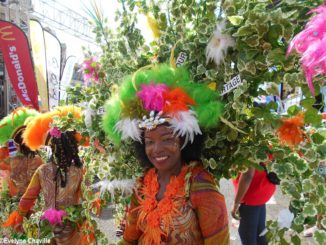 European Heritage Days are cancelled in Guadeloupe and maintained in Martinique!