From 8 to 15 June 2018, will take place in four cities and towns in Guadeloupe, the 10th edition of the “Festival Première Rencontre autour du Piano” (First meeting around the piano festival). The famous Martinican pianist, Mario Canonge, will be the event patron. This anniversary allows the association “Gwadloup Groove” to note that it already helped to promote a large number of Guadeloupean pianists.

When we asked Steve Nuissier, the designer and artistic director of the association “Gwadloup Groove” which organizes the musical event why did they call it “Festival Première Rencontre autour du Piano” (First meeting around the piano festival), he said: “when musicians, and particularly pianists, meet, this is usually around the piano, the piano is the reason why we meet. “First” is to show the importance of the first meeting between people”.

Launched in 2009, this year, the “Festival Première Rencontre autour du Piano” is celebrating its tenth anniversary. During the previous nine editions, it welcomed 64 guests from the Caribbean region (Martinique, Cuba, Dominican Republic, Guiana and Guadeloupe) and other countries (France, Spain, United States, Japan, Belgium, Cameroon). 26 of these pianists are Guadeloupean. “I decided to create this festival following the death of a friend of mine who was a pianist, Jean-Louis Mérault, in 2008. A few years ago, when people were asked to name a pianist, the only name that came to mind was Alain Jean-Marie. There is a non-representation of local musicians despite their talent. This is a springboard-festival to show that there are also other pianists in Guadeloupe who deserve to be known”, explained Steve Nuissier.

Mario Canonge, the ambassador of the 10th edition

Next month, the Festival will welcome seven other guests.

The famous Martinican pianist, Mario Canonge, with his jazz-rock-fusion, will be the ambassador of the musical event. A real virtuoso, he follows in the footsteps of two great pianists: Martinican Marius Cultier and Guadeloupean Alain Jean-Marie.

Yayoi Lina Ikawa is a Japanese pianist who was trained musically in the United States and who plays jazz, R&B, soul, classical but also world music. She was a member of the Faculty of the International Jazz and Dance Academy in Slovenia.

Marc Cabrera is considered “one of the most gifted pianists of his generation”. After taking courses in Martinique, he went to the Conservatoire à Rayonnement Régional of Lyon to complete his training. He plays jazz.

Adam Czulak studied piano in his country, Poland. The Higher National Conservatory of Music awarded him the “1st Prize for Piano, Accompaniment and Chamber Music”.

Anthony Leclaire is a young Guadeloupean pianist that the Festival presents to the public. After obtaining his baccalaureate, he joined the École de Musique de Paris, the École Nationale de Musique d’Issy-Les-Moulineaux then, the Conservatoire à Rayonnement Régional.

Finally, with the pianists there will be on stage Pamelia Stickney, one of the best theremin player in the world; the theremin is one of the first electronic musical instruments. This former American jazz double bass player will make music lovers discover her technique called “walking bass”. According to the organizers, she will be “a big surprise”…

The need for a headliner

So, the “Festival Première Rencontre autour du Piano” is an international cultural meeting by the nationality of its guests but now it is known among musicians from France and elsewhere who are many to send their applications to the association “Gwadloup Groove”. “Frequently, I don’t even have to look for pianists to invite them at the Festival because I get many requests, very original projects from artists wishing to perform on the Festival stage”, said Steve Nuissier.

At the beginning, the organization had difficulties in bringing the crowd to concerts by unknown musicians. So, it decided to put a headliner who is responsible for “driving” people to the Festival, to promote this musical instrument that is the piano. “The headliner is like a “flagship product”. This year, Martinican pianist, Mario Canonge, is the patron of the Festival”, he said.

For Steve Nuissier, this type of stage in “small format” was missing on the island because it gives musicians an opportunity to perform for the first time in Guadeloupe, many of them are from the island, it also allows to discover talents. “I know the difficulties of performing in Guadeloupe. For some ten years, I was member of a band and I applied to the FESTAG which was the big music festival of the time but we never were chosen to perform on our island, in front of our family… As the saying goes: no-one is a prophet in his own country,”, said the musician.

The piano, an elitist instrument ?

According to Steve Nuissier, the piano is not an instrument reserved for a comfortable social group. “This elitist image of the piano needs to be dusted off. Children always studied piano in Guadeloupe. Families enrolled their child in piano lessons and that had a “social aspect”. Then, they could say their child was studying piano… It’s true that today we can ask ourselves, why so many young people abandon piano lessons? Normally, pianists should have been more numerous in Guadeloupe”, he explained.

The designer of the Festival has been playing piano for thirty years. Today, he devotes himself to transmission because he teaches children how to play this instrument. However, he does not consider himself as a “pianist”. He refuses to compare himself to the “very good musicians” and, above all, he does not consider himself a professional musician that is to say whose income only comes from the playing of this musical instrument. “In Guadeloupe 80% of musicians are not “professionals” (…) In my family, three children took piano lessons. My father was playing piano. He showed me the basics when I was 12, but afterwards I “experimented”, I received on the job training. I went to study administration in Montpellier (France) and, at the same time, I was playing keyboard in bands. Then, I decided to attend music classes at the JAM in Montpellier”, he told.

For the organization, the Festival partially achieved its objectives. In 2009, if the local population knew only the pianist Alain Jean-Marie, ten years later, it thinks it can name other Guadeloupean pianists like Michel Mado, Jean-Michel Lesdel, Jean-Max Mirval, Sylvian Ransy, Didier Bride and many more. However, said Steve Nuissier: “we need to focus on masterclasses, training. Taking piano lessons in a music school is the basis but participating in masterclasses is also necessary to improve the playing of the instrument, to learn how to play with other pianists, to know the life of a professional pianist because he can give you advice and talk about his travels, concerts etc”.

During the week of the Festival, from June 8 to 15, the invited artists will meet students in schools, masterclasses will be organized. “In the past, the students had the opportunity to perform as the first part of the concerts. This initiative allowed us to discover about 20 young pianists the last few years. We also organized “The Piano in the City” where the musician had to focus on his music and forget the noise around him because he was playing in a public place”, said Steve Nuissier.

7 concerts in 4 cities and towns

Over the years, the Festival managed to retain spectators. In spite of the difficulties faced by the association, thanks to them it continues to organize, every year, these concerts. “Since the creation of the Festival in 2009, a small core of 250 people attend all the concerts. These passionate people support the Festival, some people even offer me small amount of money to help me to finance the concerts because they see where I want to go, what I want to do through this piano festival”, said the artistic director of “Gwadloup Groove” who recalled that “the first artist’s salary is the applause”. Note that the association opened a kitty on its website to raise funds for the organization of this 10th edition of the Festival.

It is however regrettable that the capital of Guadeloupe does not host any concert of the Festival, on the occasion of its 10th anniversary, but Steve Nuissier replied: “I am awaiting the proposals of the main cultural actors in Basse-Terre, the Auditorium and L’Artchipel, Scène Nationale”. 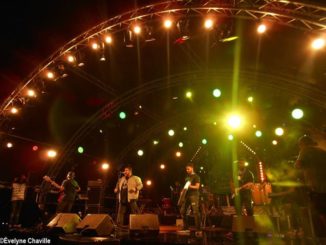