For the 3rd time in a row, Pascal Foy, the woodcarver from the island of Terre-de-Haut in Les Saintes, participated in the Pool Art Fair Guadeloupe which took place from June 14 to 16 in Pointe-à-Pitre. His stand where he exhibited facades of old Creole houses was very visited by art and local heritage lovers. 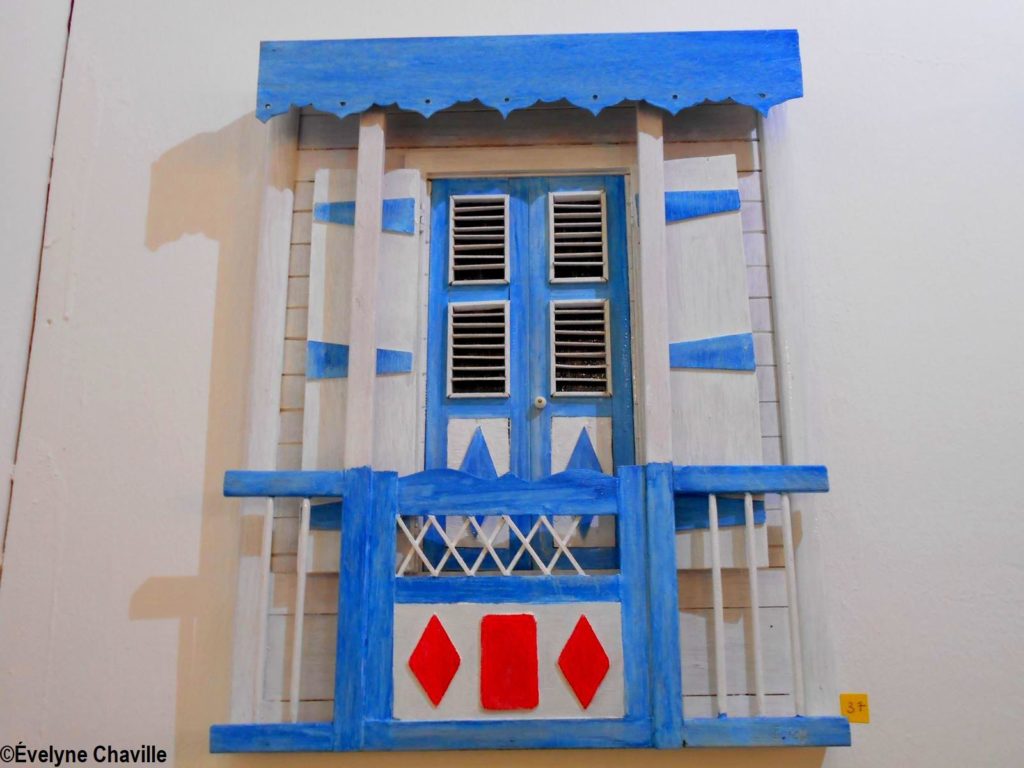 Pascal Foy is a local housing lover. It must be said that the sculptor was born in a very large Creole house in Terre-de-Haut, Les Saintes, in the archipelago of Guadeloupe.

Before, he created pieces of furniture; for example, he carved a boat deck table. “In 1990, I had the idea to carve Creole house facades. First, I fell in love with the façade of a very old house which belonged to my family; it was built before 1928, the violent cyclone of that year caused it some damage but it was repaired. Many of my ancestors lived there, including a great-aunt who was a nun. This house became my studio and that’s where I find my inspiration”, the artist told. After having made this first facade, Pascal Foy decided to attack another facade : “a friend brought me a picture of another house so that I carved its facade. I found that very well so I continued and, in 1991, I gave up cabinetmaking to become a woodcarver”, he continued. 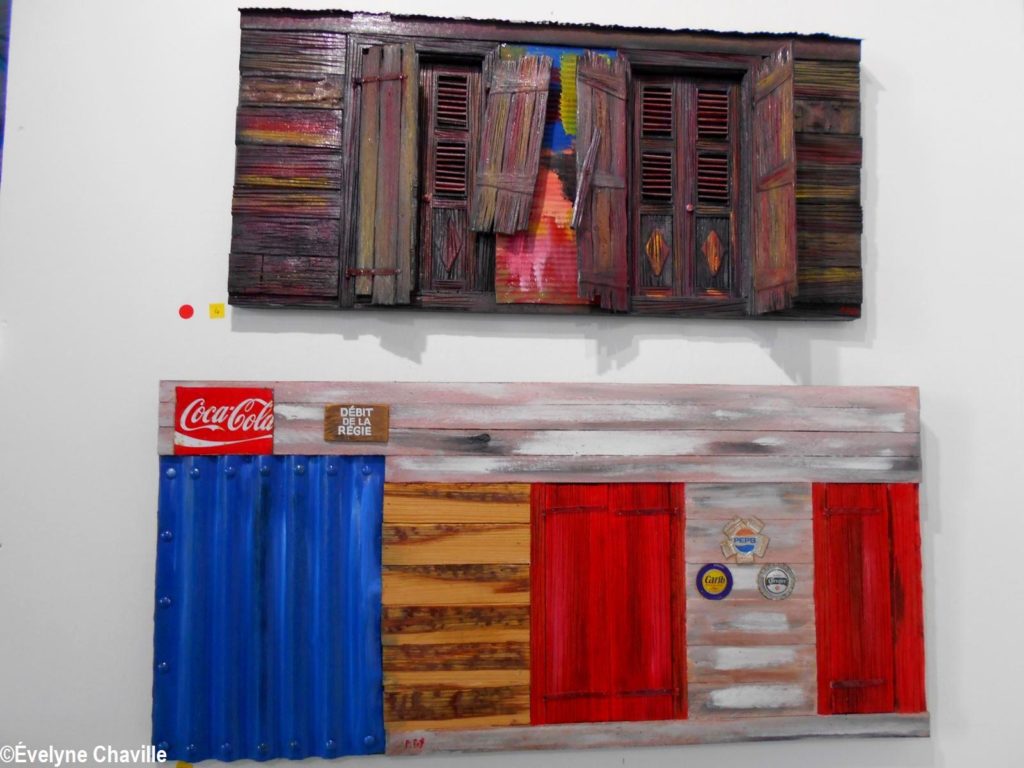 A journey through Creole architecture

Almost 30 years later, Pascal Foy does not regret having chosen this artistic way to show his love for wood, for Creole architecture. During these decades, he did not reproduce only the facades of the charming houses on the islands of the Guadeloupe archipelago such as Terre-de-Haut, Terre-de-Bas, Basse-Terre, Grande-Terre or Marie Galante. Indeed, he also looked closely at facades of the houses on several islands in the Caribbean to sculpt them and he does not intend to stop now when he is doing so well. “I traveled to Martinique, Dominica, St Martin and St Barthélemy to see these houses up close, I also worked from pictures in books. In each of these Caribbean islands, the architecture is similar but there are some differences”, he said.

Pascal Foy makes his works with raw wood (cedar), recovered wood, plywood, corrugated iron, hinges, hooks etc. And, he even showed us a facade whose parts were made with wood dating back more than 100 years…

This was the third time that the sculptor participated in the Pool Art Fair Guadeloupe, this great international artists exhibition held every year on the island. And, as always, his booth attracted a lot of visitors : “People enjoy traveling back in time and they ask a lot of questions.They can see their whole life through my works. Some people tell me that they were born in a Creole house, they lived in this type of house… I show and defend the heritage with my sculptures”, he said. 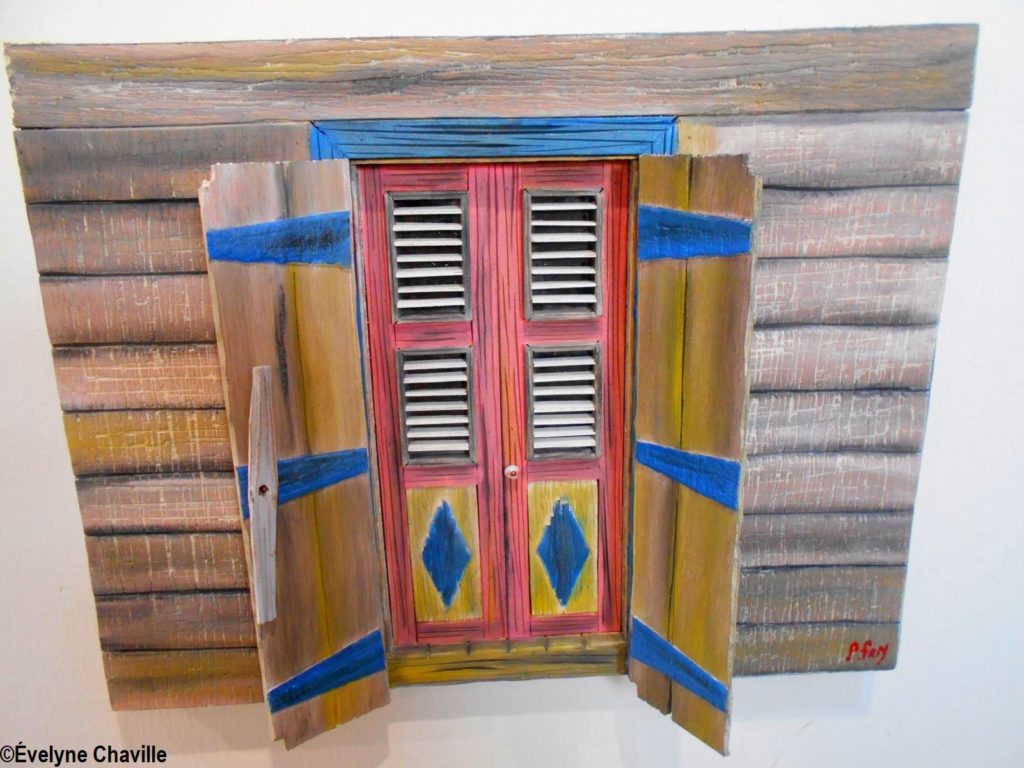 3 awards in Belgium and France

Its clientele is composed of all types of people and all nationalities (French, Belgian, American, German, etc.). He remembered that twice wealthy tourists from Dubai (a woman and then a man) who stayed on their yacht in Les Saintes came to his studio to buy one of his works…without haggling.

For the moment, the artist’s studio – the old family home – called “Kaz an Nou” is closed to the public because it suffered some damage following Hurricane Maria in 2017.

In addition to Guadeloupe, the artist exhibited his works in France (Paris, the South of France), Belgium, Martinique, St Barth… In 1994 and 1996, Pascal Foy won a diploma from the Académie Internationale des Arts Contemporains in Belgium. He also participated in the 12th Salon des Artistes Peintres et Sculpteurs Français d’Outre-Mer held from October 16 to November 5, 2000 at Espace Reuilly in Paris ; he was awarded the 5th prize of the contest which was given to him by the mayor of Paris of the time, Jean Tibéri.

“God gives me life to create beautiful things. With my art, I sculpt old things and allow people to relive their past, their happy times”, the artist said. 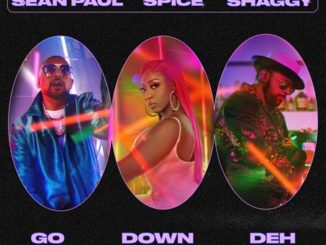 Spice, Shaggy and Sean Paul unite for “Go Down Deh” 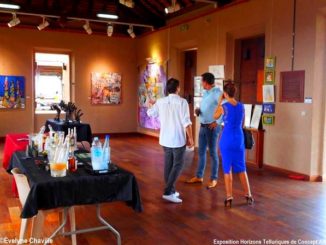