The French Ivorian, Alex Bizo, is a painter, sculptor and manufacturer of art furniture. The artist who has been settled on the island for two years has just participated, in collaboration with the L’Art s’en Mêle gallery, at the 10th Pool Art Fair Guadeloupe which was held in Pointe-à-Pitre from June 14 to 16. His designer furniture made with plastic water bottles caused a sensation. 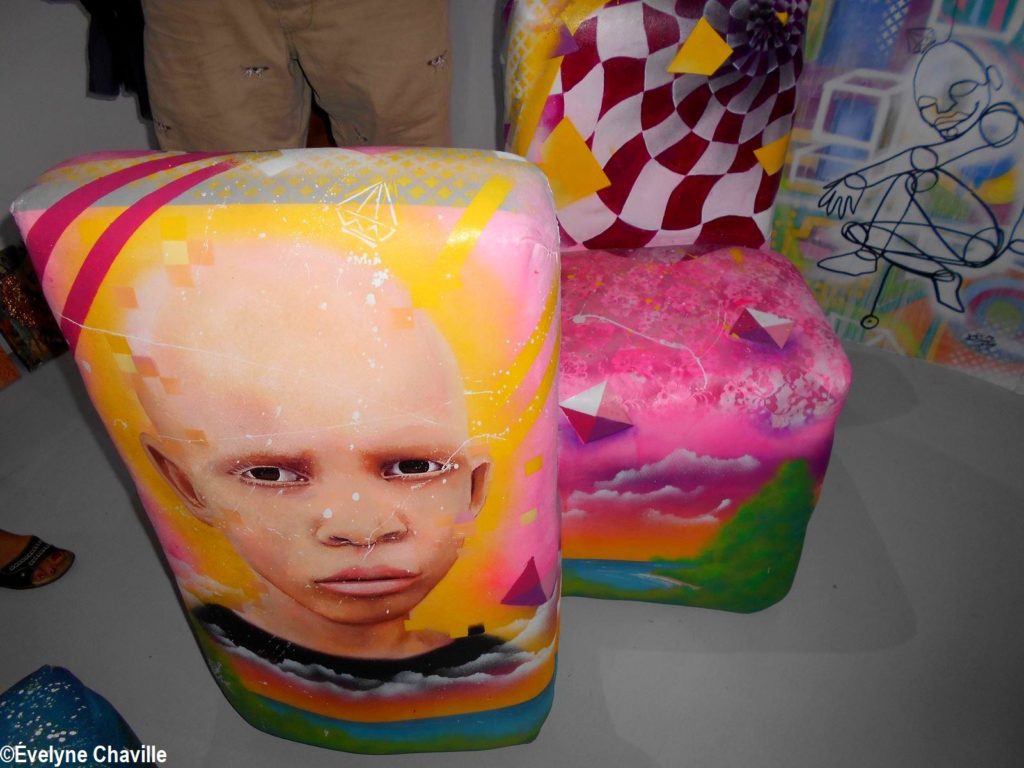 The booth B8 in the 10th edition of the Pool Art Fair Guadeloupe presented the public works from “L’Art S’en Mêle”, a new gallery located in Le Gosier and managed by the dynamic and sparkling artist-painter Viviane Pelus. In addition to paintings, drawings and a sculpture, visitors discovered art furniture made of recycled material by Alex Bizo and their questions were numerous. It must be said that these armchairs and this pouf were designed with a rather surprising material – plastic water bottles – and all those who tried these seats found them very comfortable. “In the beginning, I restored old chairs, but I was a little frustrated not to contribute more to pollution reduction, and one day I heard a researcher say that water is a resource on Earth whose volume does not vary but for commercial reasons, we have created a polluting container to put it (…). Only 7% of plastic bottles are recycled while 8 billion bottles of water are drunk every day in the world. So I decided to produce art furniture with these empty bottles and, after making investigations, I discovered that the underprivileged populations in Latin America already manufactured this type of furniture without the artistic touch. My creations are functional because the furniture is active, it can be moved in the house”, he said. 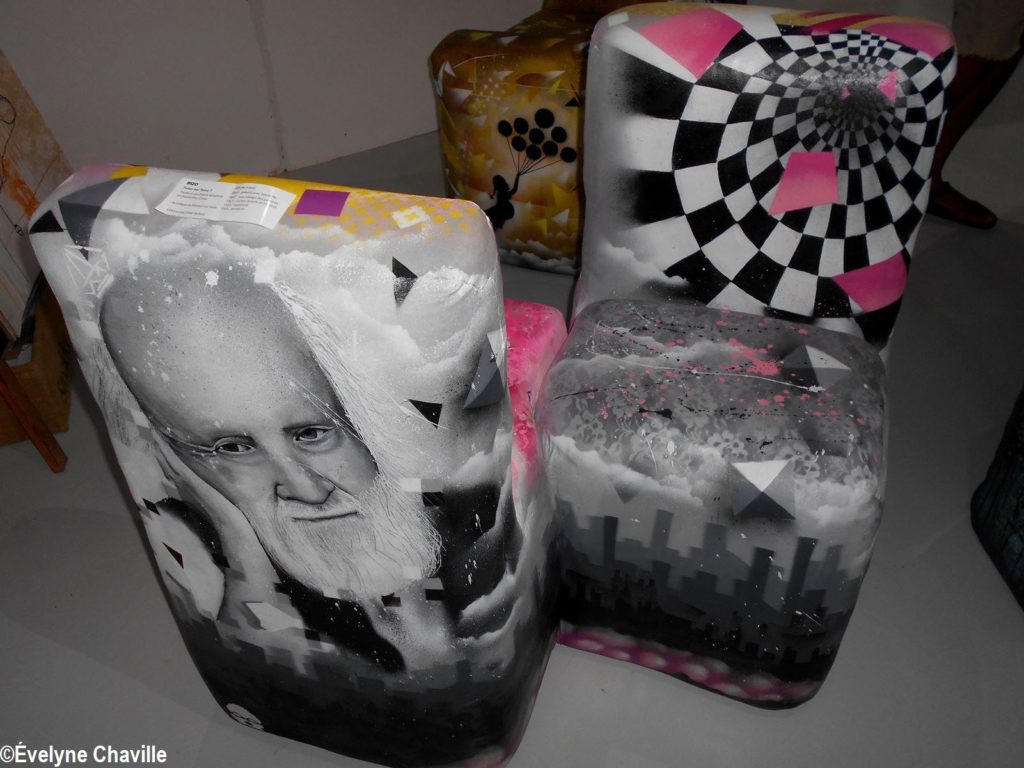 Art to protect the planet

Each piece of furniture is a work of art which, moreover, bears a name like “Lady Soul” with the portrait of the famous American singer Aretha Franklin who died in 2018, or “Futur sur Terre” (Future on Earth) with the portrait of astrophysicist Hubert Reeves. In fact, once the piece of furniture is made, the artist covers it with a canvas on which he paints as if it were a painting. His style of painting is the “cobra”, a mix of representational and abstract. “I like optical illusions, colors patches to create volume and I like to draw on the curves of furniture which may seem difficult for some people. I like to draw portraits but they are not only beautiful, they also pass on an awareness message. For example, on one of the armchairs, there is this portrait of a young albino boy with his incisive look and his irritated expression because he cannot bear the heat because of his lack of melanin and he refuses that we destroy our planet”, said the artist who lived until his adolescence in Africa.

Alex Bizo was born in Paris in 1980 of an Ivorian father and a French mother. At the age of 2, the whole family left France for Ivory Coast. When he was 6, he discovered Fine Arts because his mother who makes silk painting enrolled him at the Institut des Arts in Adbijan. He will stay there until the age of 9 and will learn, among other things, the techniques of drawing, charcoal crayon, painting, proportions etc. Then he turned to sports such as swimming and tennis. At the age of 16, he left the African continent to join the sport-study program in Dunkerque and Lille, he was part of the national tennis team of Ivory Coast in the cadet category and played several competitions until he was 21. 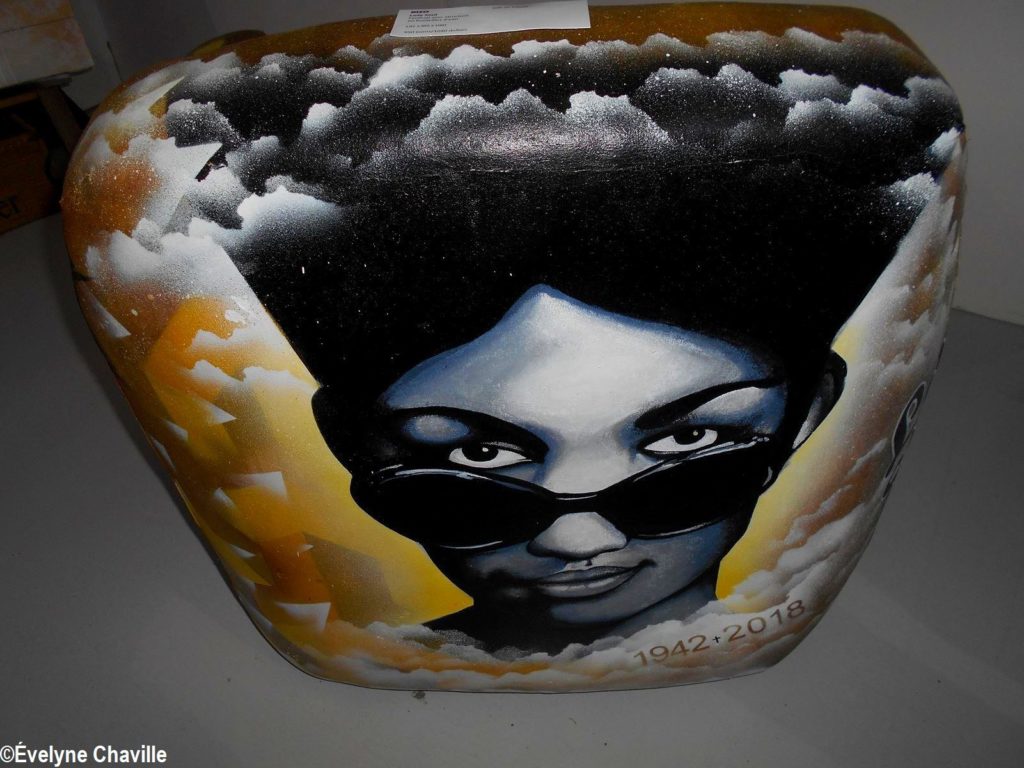 A return to art in Guadeloupe

After a ligament rupture, the young man was interested in culture and, in Lille, he founded an association and worked in collaboration with a private school of information and communication to spread and promote the “urban cultures”. “In this association, I was not an artist yet, I was in charge of artists. Then everyone found a job. I became a consultant in human resources and organization, I had that job for 15 years. In 2017, I took stock of my life and I wanted to do a job that I really like after the death of many of my friends (…), something that makes me get up in the morning and it was art at 150% ; and it must be said that during the last fifteen years, I had amassed a lot of ideas that just needed to go out. In 2006 for example, I learned sculpting with clay (…)”, said Alex Bizo.

In the stand of the L’Art S’en Mêle gallery at the Pool Art Fair Guadeloupe was a sculpture by Alex Bizo which also attracted visitors’ attention. “I like the preciosity of the human race. This work is half man and half skeleton, it’s a representational-realistic style. The message is the less we pollute the more we take care of men“, he said.

Two years ago, the now professional artist, his partner and their two children decided to settle in Guadeloupe : “we were looking for light, mountain and sea”, Alex Bizo said. 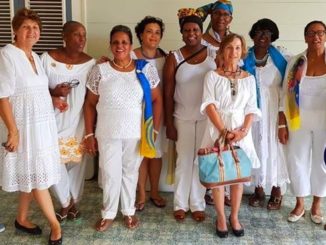 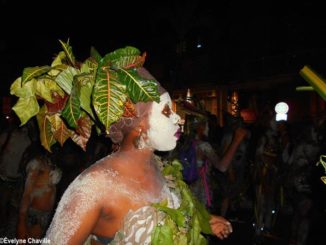